The world’s your lobster

John Francis Costello, aka Frankie Drleanbass, tells the story of an unexpected encounter when practicing LRF style on the Plymouth shoreline.

Last night I headed down to Plymouth’s Art of Fishing tackle shop where I met up with Ben Field and some newcomers to LRF for an evening session. We started at the water taxi berth and pulled a few fish including pollack, smelt and a goby from there. I went down on the taxi to the Barbican to meet Ryan Timberlake we had a quick fish there and then headed back to catch up with the group. 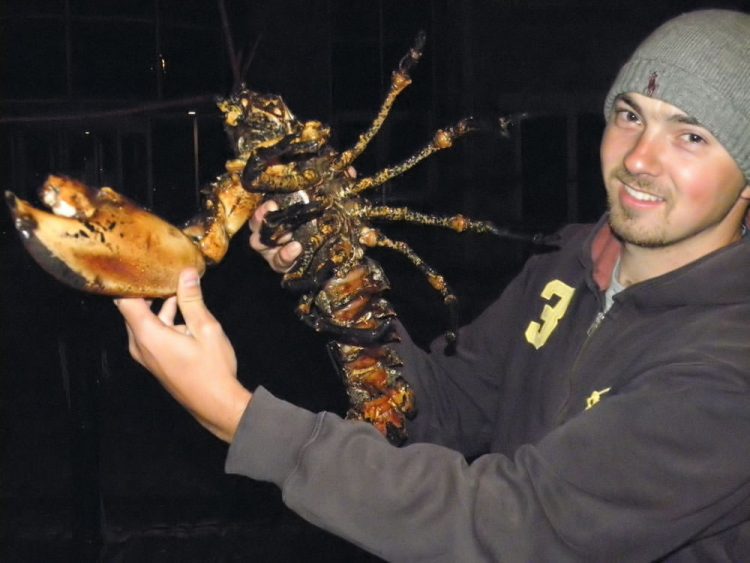 Dave Clayton joined us with his Art of Fishing starter kit, purchased after his first night on the lures previous evening, obviously bitten by the LRF bug. We were quickly back among the fish and all the lads who turned up for the taster session caught fish, had a great night and everyone seemed to really enjoy it.

With the departure of the lads from the shop group Soon it was just me, Ben, Dave and Ryan. Ben suggested that myself, Dave and Ryan try a change of venue and that we for a place where we had a chance of a bigger fish. I think even Ben was shocked at what was to appear from this mark.

Straight away Ben, with his fishing head on, was into fish and he must have had 10 fish before the rest of us had two or three. A changed, by me, to the ever faithful pink Isome produced immediately as the fish hammered the lure including some really chunky tompot blennies together with loads of pollack, smelt and rock goby. 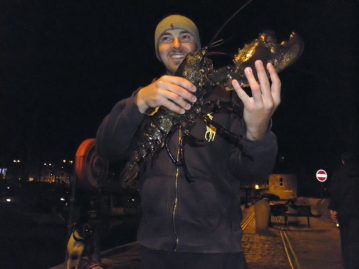 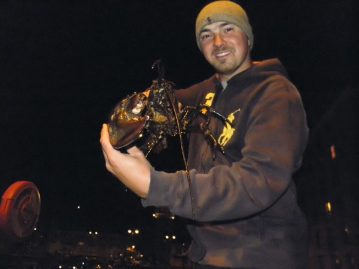 Ryan shouted to let us know he was into something special and his rod was bent double as we watch his rod in awe. Ben had spotted a conger earlier in the night we thought he might have hooked into an eel. In the gloom of the night we could still see nothing as Ryan worked hard to win back line, inch by inch. Speculation mounted among us; Ryan thought it could have been a huge squid, Sam Clarke, who had joined us, mentioned flatties which set me thinking about the ray I had landed recently and there was still talk of conger.

However our guesses were literally stabs in the dark as still we had no idea what was on the end of Ryan’s line as he very carefully and skilfully manipulated his balanced gear. Then out of the depths appeared the biggest lobster any of us had ever seen. The next problem was how to land the beast? Sam rushed to his car, grabbed his net and raced back to assist with the landing. However the lobster was still not ready for the net, swimming backwards and gripping on to the weed with his monster sized claw. 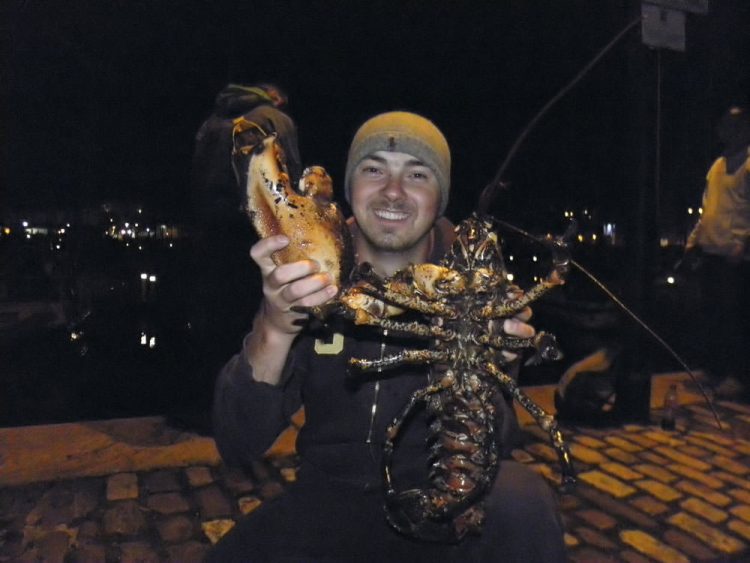 Eventually the old warrior was on the surface with Sam leaning over the wall and me holding on to Sam’s ankles, while Dave held on to his belt. But still the crustacean eluded our efforts to secure it. Eventually Ryan managed to drag the now tiring lobster to a set of steps 80 metres where Sam netted it at last.

Only then did we realise the true size of the catch. After a few quick photos we weighed this amazing creature that bumped the scales down to more than 8lb. Ryan quickly and carefully returned the big old warrior back to his underwater home, a lucky escape for what is tasty and expensive seafood.

I think we all felt lucky just to witness such a great individual at close quarters. The subsequent fishing was almost an anti-climax even for Dave who landed a nice bass of over 3lb on his first night with his LRF rod, a great way to christen his new set.

First cuttlefish, then squid and now the king of the crustacean world, what next for LRF?

Sizing a hook to match a lure