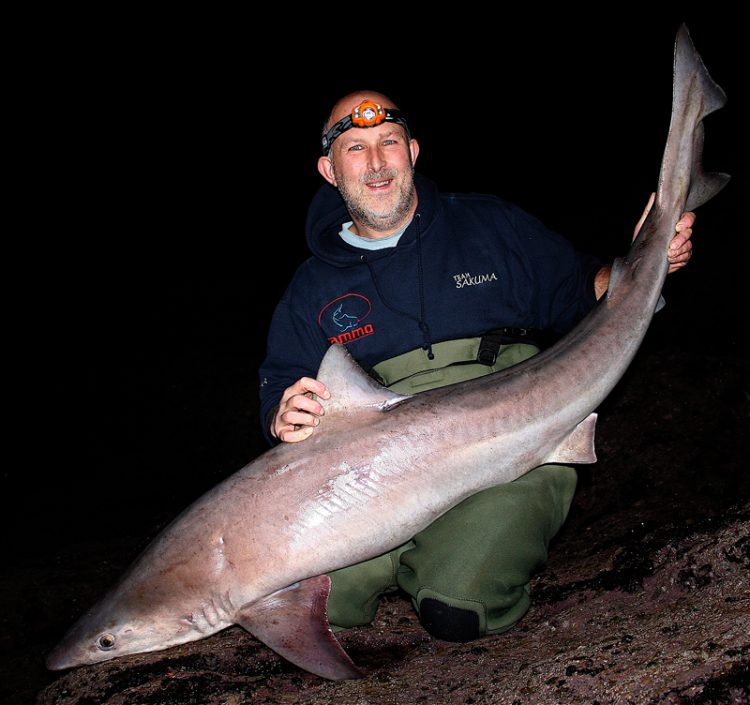 Shore tope record holder Kev Legge has beaten his 66lb benchmark set back in 2006 with a 66lb 8oz monster from a North Devon rock mark, while his SAKUMA team mates have also enjoyed some top tope action.

Kev from Braunton, North Devon was fishing with regular angling buddies Wayne Thomas and Derek Ferret. His successful tactics were a flounder fillet bait mounted on Sakuma 8/0 Manta Extra 545 and 8/0 Pennel Manta Extra hooks on a pulley rig, incorporating a 150lb wire biting length. The record-breaker was weighed on calibrated scales and witnessed by the other anglers before being returned alive. All information has been passed on to the British Record Fish Committee for ratification.

But Alex was later left deflated after a much more substantial tope was lost. Alex said: “I was on a high and the adrenaline was still coursing from the 45 pounder when another more powerful fish picked up the fresh flounder bait and charged off. I could only watch as a silly amount of line was run off… I had to do something as I had very little left on the reel! I had no choice other than to apply thumb pressure to the spool, which is always risky of course, and the big fish smashed me up big style! I was gutted, and examination of the trace showed it to be badly scoured, while the 70lb wire bite-piece was rasped and bitten through. Next time, I’ll follow Kev’s example and use heavier wire!”