The St Osyth beaches are once again the place to be, with some incredible catches of thornback rays being caught. Local angler Matt Clark chose the long hike to the Nature Reserve boundary and landed a staggering haul of eight rays to 6lbs, all his fish were caught on bluey and squid cocktail baits.

The weather seems to be warming up nicely as Spring arrives in the Essex area and with lighter winds has meant that boats have once again been able to launch, and the weekend saw many small craft out on the water. Most fished around the windfarm on the Gunfleet sands and reports were fairly good. 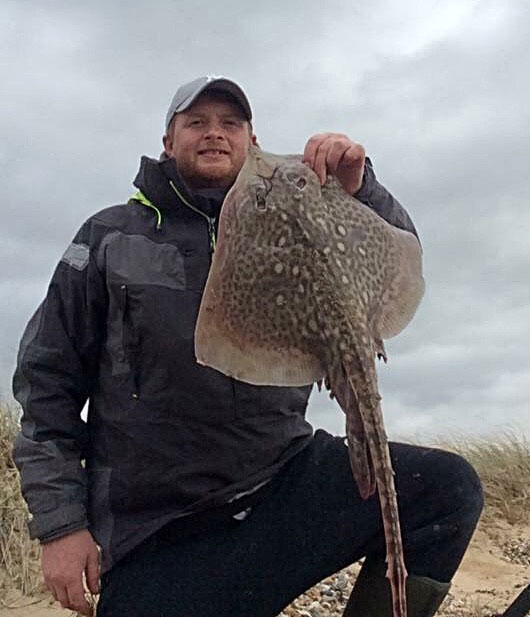 Matt Clark with one of his rays off St Osyth

Simon Main fished out of Brightlingsea and reported thornback rays to 11lbs, whiting in abundance and a few small codling.

The charter boats all reported good catches of rays plus dogfish, whiting and some mini-codling.

The next few weeks should see more bass return, but please remember at the moment the Recreational Angler ruling is that any bass caught must be returned until July and thereafter only one bass per angler may be kept.

Colchester Sea Angling Club held their first sponsored Colchester Bait and Tackle Match on the Holland beaches at Brighton Road. Twelve hardy members were met with a strong north-easterly wind. The wind made the fishing difficult with only a few fish caught per angler, but all anglers caught. Whiting, dogfish, pouting and a lone eel were caught. Martin Close came out in top place on the day with 2¼lb, second spot went to Chris Mills with 2lb 2oz and third placed Gary Hambleton weighed in 1lb 15oz.

The heaviest fish prize went to Gary Hambleton for his 1lb 15oz dogfish.

Clacton Pier is also fishing well for thornbacks and the rays are being caught on most tides along with dogfish and plenty of small whiting.

The Holland beaches are seeing more dogfish being caught and some rays, plus reports of the odd small bass being caught.

The Frinton beaches have yet to see thornback rays being caught and at the moment it seems to be dogfish after dark, small bass and plenty of small whiting. Garry Graham and Ronnie Adamson fished these beaches two hours either side of high water and told me that all they could find were the usual whiting shoals and small codling.

Walton Pier has seen rays caught from the head of the pier and also dogfish. It’s also good to see those small spring codling being caught and hopefully that will bode well for the future.

Gynn Wall is Place to Be