The Lancashire sea fishing has picked up with the warmer air temperature. The summer species really are moving in with smoothhounds, tope and rays all showing.

Fleetwood and District Angling Club found that a week can make a massive difference to sea angling catches. Last week at Five-Bar Gate twenty-three anglers managed four fish between them and this week twelve out of thirteen recorded catches. It is marvellous what a change in wind direction can do.

Early morning in this week’s match it was blowing hard and throwing down, but the weather gods smiled on the entrants as it changed to just a light breeze and no rain. No one was expecting much, just a few dabs and maybe a bass, but the anglers had a good run of smoothhounds instead. Crab was the bait of choice today for the hounds.

David G Hutchinson put in a superb performance catching seven smoothhound and four dogfish for over 500 points. David’s best fish measured 114 cm, which works out to about 12lb. This fish was beaten by John Hill who had a 125 cm specimen which converts to an estimated 15lb. There were also a few thornbacks caught. 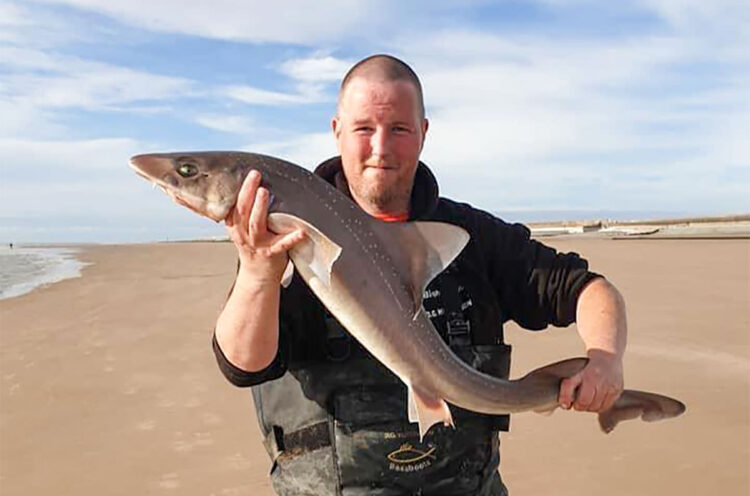 David Hutchinson with one of his hounds

David G and John Hill both tied for the fish worth the most points, 80 points winning £6.50 each.

Next week’s match will be at Lytham, hopefully there will be plenty of flounders.

Golden peg was won by Tony Owen. The next match is the final one of the league and will be fished at Preston with the date sorted over the next few days.