Anglers in Italy have expressed their dismay at proposals before the Italian Parliament to implement a licensing scheme covering recreational sea anglers.  The Bill suggests that shore anglers will have to pay €20 per annum with boat anglers being hit with a fee of €100 each year. It is not clear if this is for anglers on charter boats and / or those who fish from their own boats.

As a double whammy the proposals indicate that only 30% of the fee income will be used to the benefit of recreational sea angling with the remaining 70% disappearing in the main Ministry coffers. The main use of this budget is to support the commercial sector. 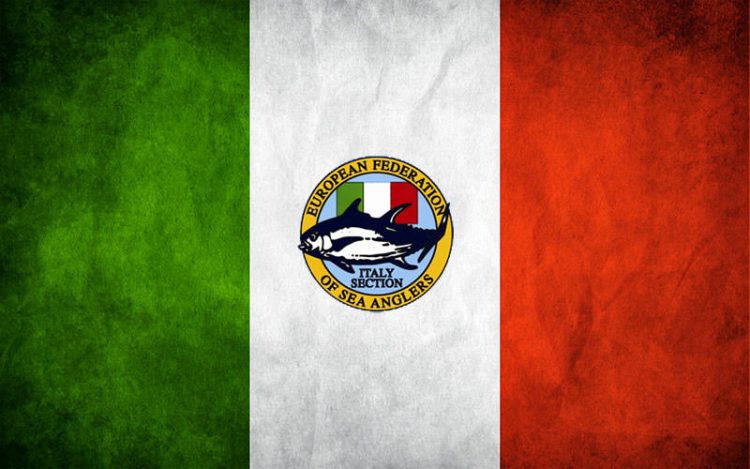 In order to raise the concerns of the sea angling community Massimo Brogna, the President of the Italian Section of the European Federation of Sea Anglers, EFSA, has written an open letter to the politicians involved. Massimo hopes that this may convince Parliament to re-think this controversial matter which is also a subject of concern to the tackle trade in Italy where tackle sales and other recreational sea angling expenditure exceeds that derived from commercial sources.

The original text of the detailed letter can be viewed on the pescaricreativa.org website and a translation is reproduced below.

September 23, we were invited by the President of the XIII Commission of the Chamber of Deputies for a “… informal hearing on issues of interest in the sport fishery” .

During the hearing there has been illustrated the proposed law on “Measures for the Fish Sector”, on the initiative of the Deputy Oliverio, who art. 24 provides for the establishment of a recreational fishing license for consideration.

The hearing lasted about 45 minutes and three organizations being invited, it was not feasible to know more, if proof were needed.

But since we have so many questions about so many issues of concern that affect our industry, which includes about one million recreational fishers, we found it useful to have all to be properly informed about what is happening, as it happens, and the role of industry associations, often charged not to work too much.

Therefore, in consultation with our Scientific Advisory Board, we have opted for the use of the open letter to you, and copied to the thirteenth Standing Committee of the Chamber of Deputies and the Director General of Fisheries MIPAAF, which we believe will make known to the wider audience possible positions of each of the questions relating to our industry.

Prior to raise some questions, we can not help but to focus on what is reported by the National Programme for Fisheries 2013-2015.

The statement underlined, from which EFSA Italy dissociates in a firm and resolute, left us baffled to say the least, and we believe it is extremely serious part of a policy document of the Government.

The same plan suggests a process of “..a second phase of the census of fishermen at sea.”

Would it not be appropriate to await the conclusion of the Census and data on the size and in general to the specific problems of the sector, including local, before starting the process for the eventual establishment of a fishing license?

A careful reading of the bill Oliverio, it is clear that it is on action to the fishing industry and its aim is “a decisive action to restore competitiveness and growth for business and development at the national fishing companies, determining the growth in size and the strengthening of global markets. In this context it is urgent to carry out a process of repositioning the industry and remove barriers to the process of modernization, especially in light of the scenarios that will open up as a result of changes introduced by the legislation of the European Union ” .

How do you think that a fishing license for consideration for recreational fishing may facilitate the achievement of the objective of the bill Oliverio?

Considers that the imposition of a fishing license can reduce or stop illegal fishing?

The reasons for the proposal Hon. Oliverio (the license fee is already available both for hunting and for inland waters, so it is believed that sea fishing should be subject to the possession of the license) they appear superficial and lacking in logic to an extremely complex and much more complex than those obtained by hunting or fishing in inland waters.

It ‘been prepared a study on the costs and benefits of implementing such a proposal?

Since the EU and our government complain about not being able to find a solution and the right resources to combat illegal fishing, how do you think they can find to also check that legal?

The MIPAAF in June 2010 set up a working group (of which Italy is part EFSA) “with the task of carrying out a detailed assessment of the current regulations on the recreational and sport fisheries and the development of a proposal for a complete overhaul and organic For reasons of simplification ” .

To date, this working group has produced very little, having been called in the past a few times and almost exclusively to be made aware of what has already been established by the MIPAAF.

Does urgent and very timely reactivation of the Working Group for further discussion on the issue that leads to a shared proposal?

Think may be useful to restructure the Working Group so that it can work effectively with adequate planning and involve them early in the legislative process and matters relating to recreational fishing?

Is it not appropriate that the legislative proposals that affect us are introduced with the objective to promote and develop recreational fishing instead of aiming (as often happens) to safeguard the interests of people of different areas?

As revealed by a number of economic studies, the recreational fishing sector involves a number of subjects than those of commercial fishing and properly harnessed is capable of developing a significant economic boost.

The global economic crisis, the rising cost of petroleum products and to lead a decent life for their families are common problems in many manufacturing sectors such as marine, equipment manufacturers and shipyards that are closely associated with recreational fishing.

Do you think the government should pay recreational fishing the same attention given to commercial fishing with bills that provide the same economic incentives for the development of the sector and related sectors?

Considers that the association in the sector are involved in the management of marine resources and the environment, having demonstrated with various experiences in the world to be able to do with consciousness, professionalism and with great results?

Obviously they are just some of the many questions we ask ourselves on a daily basis.

Worldwide associations to which I belong (EFSA – European Federation of Sea Anglers and International Game Fish Association), are for years facilitating the integration of recreational fishing and commercial fishing and scientific research, protecting marine resources and privately funding research and projects that have brought economic prosperity and much needed jobs to the seafaring communities and regions concerned.

The World Bank together with the International Game Fish Association, recently identified in the promotion and development of recreational fisheries and the protection of marine resources, a virtuous way to reduce poverty in developing countries and dependent on tourism and cope with the drop in revenue resulting from traditional fishing.

We believe we have all the skills, experience, passion and the right to take part in the legislative process that concerns us. The community recreational fishing would appreciate much that our industry had the attention it deserves because, as stated in the National Programme for Fisheries 2013-2015, the sector is “… an important economic sector” and “a possible area of cooperation with the world of professional fishing “and is deserving of planning and development .

I personally follow these issues for a long time and in my opinion, to date it has not been possible to establish a constructive relationship with the institutions satisfactory.

We are confident that greater collaboration could bring considerable benefits to all stakeholders.

As you can see, however, we are always optimistic and rely heavily on the commitment to innovation manifested by the present Government.

While waiting for his position on the issues mentioned above, I request a meeting to take the opportunity to learn about our position on recreational fisheries, on what we actually did and how much you can do together to promote it.