Seasonal Trip on the Silverline

Members of the RAF sea angling group based in the north east of Scotland took advantage of the recent break in the weather to head to Scrabster for a day out on the Silverline with co-owners Billy Farquhar and Wing Munro. The sea off Scrabster had the greeny opaqueness normally seen in the waters around Norway and ice floes up to 15 feet across in the bay gave an indication of the surface water temperature. Strangely enough dolphins were spotted a couple of times during the day in the wake of the boat. 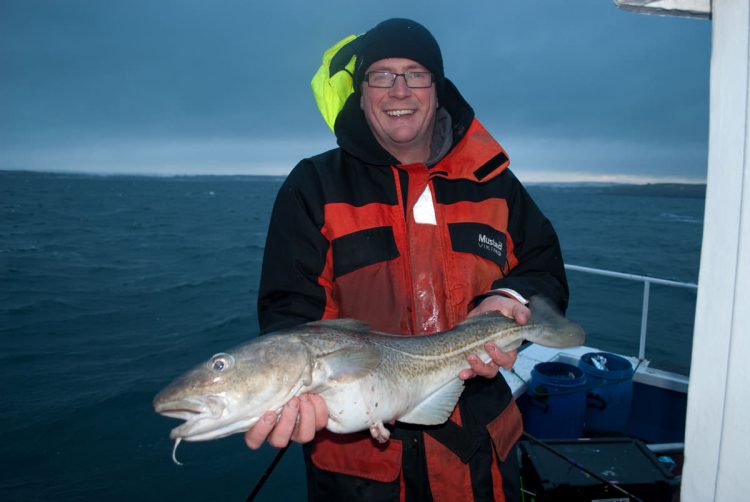 Although the forecast gale force winds did not put in an appearance the gusty south easterly restricted the fishing to the marks from Holborn Head to the Little Clett. Slack tides meant that the cod were difficult to locate and the hoards of coalies were a pain at times as the familiar jiggling on the line signalled a full house of the little blighters. The odd bigger saithe did hit the deck with best of 5lb plus being taken by Chris Edwards.

When the cod were located they average size was around the 4lb to 5lb mark with the better fish coming to those casting pirks. Trip organiser Daz Rose had the biggest cod of the day at 8lb 2oz.

As well as the cod several decent ling were landed to those fishing with mackerel baited hokeyes including the big pink monsters. A sprinkling of unseasonal pollack also put in an appearance with the best of these making 6lb, good fun on the light tackle that most of the lads were using.

A couple of cod did hit shads but the lack of movement due to wind against tide meant that is was not the best day to be using these lures. The bigger shads did have the advantage of avoiding the coalies.

As usual Wing kept up his usual banter and kept the kettle boiling all day with the bonus of a season dram or two for those anglers lucky enough not to be driving.