Willie Carr and Ally Campbell joined regulars Scott Gibson, Robert Campbell and Billy McCormack on our annual Christmas skate trip out with Ronnie Campbell aboard the Laura Dawn. The crew arrived in Oban at 8.30am and the conditions were perfect, flat calm and an almost tropical 7o in sharp contrast to the recent sub-zero conditions we have all been experiencing.

A short steam saw us arrive at our mark at 9am and with the anchor set in jig time it was time to drop our baits. We were fishing a combination of whole mackerel / squid, whole coalfish / squid or octopus on a running ledger with a 150lb trace and a de-barbed 12/0 hook. The neap tides, 3.3m, allowed us to fish with only 2lb of lead all day despite the depth of water below the hull. Instructions on how to rig up for the common skate can be found here. 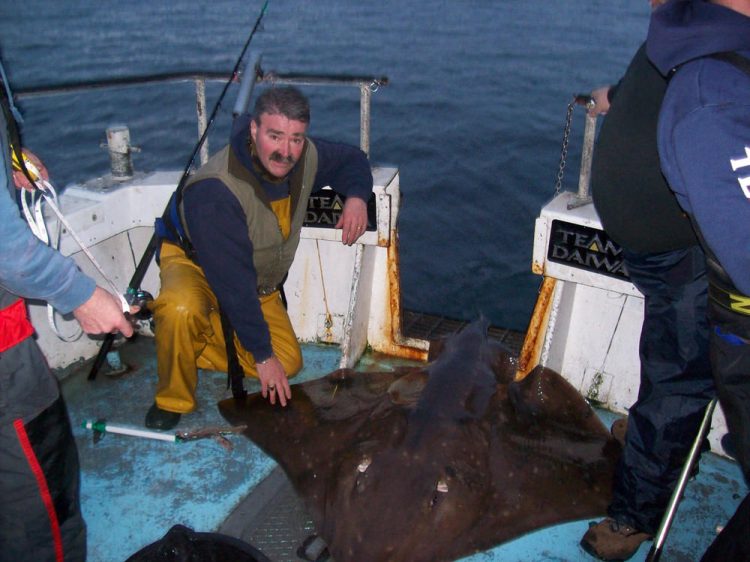 Two hours into the fishing, as we approached the high water slack the first fish pick up Billy McCormack’s bait. It proved to be a 157lb female skate and was quickly followed by small female of 67lb which fell to Robert Campbell’s rod. After a hour or so we had a double hook up when Scott Gibson and Billy both hooked into fish. These turned out to be males, Scott’s was a nice 123lb fish and Billy’s went 110lb. As these two fish were being tagged and returned fish Ally Campbell was bringing one to the side of the boat to be gaffed. This was to be a new personal best for Ally; a 157lb female.

The next hour say mayhem on the boat with as three fish snaffled the baits at once. Willie “Skate Virgin” Carr, Scott and Billy were all hooked up at the same time. Willie’s first skate turned out to be the biggest of the day and his big female measured out at a fantastic 185lb. Scott and Billy again were among the males with fish of 119lb and 112lb respectively.

Four of the skate were return captures which had been previously tagged and tags were set into the other four.

A back breaking day for the five anglers but all had massive smiles on their faces as Ronnie did his stuff as usual in finding the fish.

A spurdogs were also landed and Billy managed a personal best conger with a fish of 13lb.

One day Ronnie Campbell will get dragged into the world of email and the internet but until then you can contact him on 01631 750213 if you’re interested in tangling with a barn door.