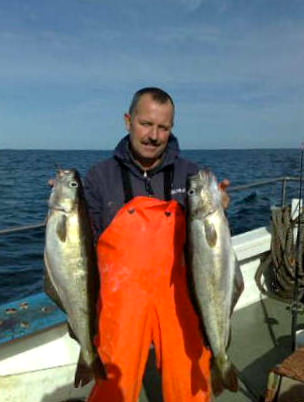 Intermittent periods of movement on the sea brought a few cod inshore in recent days, but catches very hit or miss. As usual those anglers in the right place at the right time have done best with the low water marks producing bags of up to 5 cod with a odd bass also. Hartlepool promenade always fishes very well in October with crab baits picking up any bigger fish. John Coyle and another angler both report cod over 10lb landed from here early last week. Whiting are also out in force, though daylight catches have mainly been undersize; night sessions more productive with worm baits tipped with mackerel or squid best for whiting, dabs, and flounders. Steetly pier has seen some bigger mixed bags of whiting and dabs. The colliery beaches are much the same with cod over low water and whiting on the flood tide. Roker pier has seen small cod and lots of whiting and flounders from the round end. S.Shields pier has also produced similar bags. The lower Tyne has lots of small cod and whiting showing and the lower Wear also has whiting and coalfish present.

Boats: Boat returns have fallen away in roughening seas, but the best catches are still around forty fish with cod and ling to 12lb. In addition, there’s been some good area pollack showing off Craster, where Tony Rutherford fishing aboard “Bon Amy” took two of 9 – 02lb, and 8 – 02lb.

The Eastenders H.S.F. Open on Saturday fished at the Glass Centre in the Wear saw flounders take all prizes. Neil Cutler had one of 1 – 02lb; Joe Wilton had one of 1 – 01lb, and there was a three way tie for third place with Neil Cutler, Mason Burton, and Mick Sopp all having 1 – 00lb.  Neil Cutler also had the heaviest bag with 5 flounders for 4 – 00lb.

Seaham juniors also fished on Saturday for the Bowie Cup with just two weighing in. Katie Peel won with 2 plaice for 1.36lb, and T.J. King had a mackerel of 1.1lb.

Coming up: The 5th Northumbrian Open is on Sunday October 19th fishing from 10.30am till 2.30pm between Tynemouth Pier and Pattersons Garage, Beadnell. All rivers and piers are out of bounds, except Blyth Pier which can be fished both sides.  Basic entry is £12 seniors and £5 juniors plus various pools and team events. Register from 8.30am till 9.30am at the Bank House Club Newbiggin. The top prizes are £1000 and £350 for the heaviest bags, £500 for the h.s.f., and special prizes for 10th and 20th places, plus the usual full supporting prize table. Contact Steven Surtees 07868660710 or Brian Hurrell 0753569951.