With a decent forecast and a promising tide a group of mates Jerry Guy, Paul Mckinnon, Michael Edwardson, Sanders Mcphee and Murray Farmer from the Wick area in Caithness decided to head west to their favourite shore marks at Strathy Point. After an abortive, short recce at an un-fished, snaggy mark the famous five decided to head for their normal ledge on the east side of the peninsula.

Previous experience had shown this mark to be productive for spurdogs, LSDs and flats and the occasional encounter with large skate so the lads rigged up with one rod for the common skate and another for the smaller species.

Soon the rod tips were bouncing as the ever reliable lesser spotted dogfish found the baits and a succession of these hit the shore.

After a while Sanders McPhee’s rod, baited with a whole mackerel, gave a series of hefty thumps before settling back into its resting place for five minutes. The rod then lurched over and line stripped from the reel at a rapid rate. Lifting into the fish it was obvious that Sanders had connected with one of the big girls. 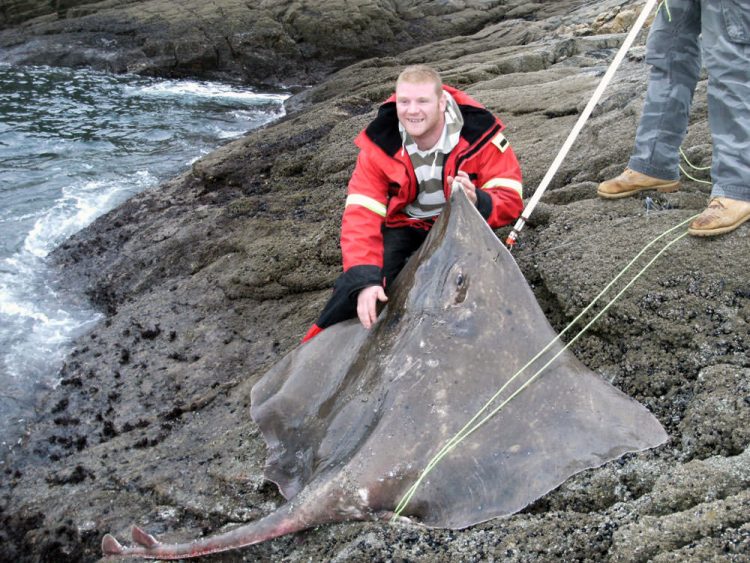 The fish made a series of short but powerful runs as the rod and angler both bent into the fight. After about 50 minutes the fish seemed to be tiring but she still managed to make her way back to the seabed before eventually being brought to the rocks around half an hour later.

The problem was now to get the fish up onto a safe platform where she could be unhooked. Michael clung like a limpet to the near vertical rocks and managed to sink the gaff home at the first time of asking; all they had to do now was lift the fish 10 foot up the rocks! Clearly this was impossible so the lads working as a team manoeuvred the massive beast along the rock face to a sloping shelve.

With a collective sigh of relief the monster skate was finally hauled ashore where she was unhooked, measured and after group photos was released back into the deeps. A brilliant joint effort to finally get one of these majestic creatures landed from the shore in the far north. The skate measured 67 inches across the wings and had an overall length of 88 inches which, from the measurement charts, equates to 208lb. A truly memorable fish on a day which will live long in the anglers’ memories.

The fish would have smashed the official British record and is only 20lb less than the biggest catch and release specimen recorded in European waters.

As the day continued Murray also hooked a skate but with the fish picking up the smaller baits the one sided contest was soon over as the fish threw the hook.

If you are considering fishing this area then please take care as the access down the cliff can be extremely dangerous particularly in wet conditions.

Thanks to Jerry Guy for the photos.