Boats: Whiting seem to be dominating catches to the North of Hartlepool with a better chance of picking up a few smaller cod from around the Saltscar Buoy to the South.  The Wear Boating Association evening match last Wednesday saw the Wanderer get amongst a few better fish when Ronnie Mason landed a ling of 14lb, Kath Welsh had a cod of 4 – 06lb, Dave Patrick had a cod of 4 – 02lb, and Steve Welsh had a cod of 3 – 10lb amongst lots of mackerel pouting and whiting. 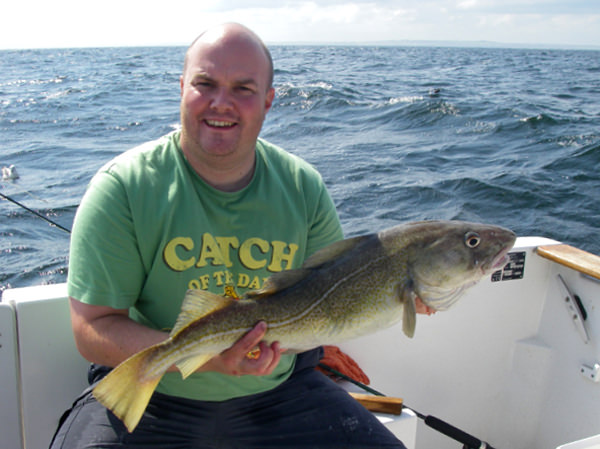 Graeme Armstrong on ‘Amadeus’ had pollack to 8lb and cod to 5lb on blue shads off the Tyne, while Paul Hardy on ‘Aquaholic’ took pollack to 9lb also from a Tyne mark. The Amble Boat Company sponsored last weekends Royal Quays users boat competition. The biggest cod came on ‘Slinky Kate’ skippered by Norman White and was a personal best cod of 10lb 8oz for Tony Gray. Adam Johnson was second with a cod of 8lb from ‘Amy Joe’, with Terry Moody third with a cod of 7.5lb from ‘Vicky Jo’. 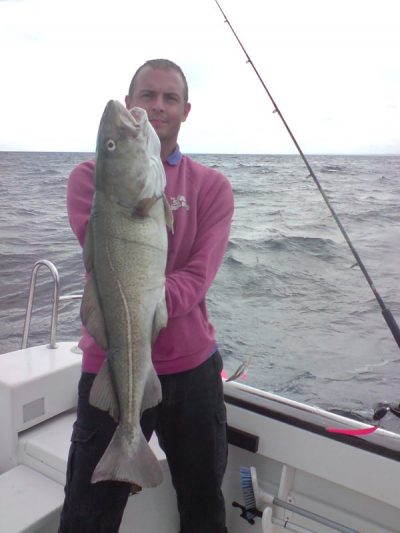 The biggest fish reported recently has to be the cracking 18lb 4oz cod taken by Richard Rolls on his own boat ‘Stingray’. Cod apart, Richard and friend Gary Bradley also caught ling to 9lb. Tony Avis skippering ‘Mistress’ reported a 10-8lb cod among numbers of smaller codling taken during an evening session. Anglers aboard ‘Sarah JFK’ report excellent fishing. Cod and ling to 14lb, pollack to double figures and a few catfish in average catches of 70 -100 fish for a day.

Shore fishing: Mackerel still in short supply with just the odd fish showing on some tides. Best sport coming from Steetley and Roker piers, with odd double figure bags reported. There’s evidence of cod moving inshore in increasing numbers now, with most fish between 1lb and 2lb from low water marks during night sessions. Odd bass to 3lb and plaice are taking ragworm baits when there is a bit of a surf running onto the beaches. Whiting are present in large numbers after dark, but are becoming more evident during daylight tides.  North of the Tyne, the rock edges at Eyemouth producing cod to 6lb and wrasse to 4lb in calmer conditions.

With good numbers of flounders, eels, coalfish, and codling evident, both the Wear and Tyne are very popular at the moment.  The East End and Hendon sweepstake fished in the Wear at the Glass Centre on Wednesday saw all 19 anglers taking fish.  Eddie Knightly won with 3 for 79cm, and there was a tie for second place with Steve Williams and Dave McCready both on 75cm.  Ernie Hunter had 3 for 72cm, being unlucky to drop a specimen eel off on his last cast, and Dave McReady had the longest fish at 35cm.

The East End and Hendon roving sweepstake on Thursday night saw 3 out of 9 weighing in, Gareth Gardner winning with 7 fish for 180cm ahead of Tommy Tate with 6 fish for 150cm and Anthony Ford with 5 for 125cm.  The Eastenders open at the Business Park on Saturday saw Chris Stringer land the heaviest bag at 5 – 03lb, including the h.s.f. with an eel of 1 – 12lb; he also took second place h.s.f. with a flounder of 1 – 11lb. Mason Burton had a coalfish of 1 – 10lb, and Chris Stringer also took fourth h.s.f. place with a flounder of 1 – 05lb.

Seaham AC juniors fished for the George Tulley Memorial Trophy on Saturday with 5 out of 8 weighing in 2 flounders, a plaice, a whiting, and a codling for 2.57lb.  Kieron Newton had a cod of 0.97lb, while Liam Prest had a plaice of 0.59lb, and Jed Charlton had a whiting of 0.50lb. Seaham seniors fished on Sunday for the Crawford Cup with 14 weighing in 31 fish… mainly whiting, for 21.08lb. Ken Robinson had 8 for 6.11lb; Mick Davison had 3 for 3.47lb; Shirley Newton had 4 for 2.47lb. Gary Ramsden and Henry Hogwood took the team prize with 9 for 4.48lb.

12 members of Seaham AC travelled over to county Cork recently and found plenty of fish with ten of the members breaking personal bests taking 12 conger eel over 20lb, 6 over 30lb, and 2 over 50lb.

Sunderland S.A.A. had 6 out of 16 members weigh in on Sunday. Phil Wright fished the groyne at South Shields and took a lone winning codling for 1 – 06lb, Ritchie Carr had an eel of 1 – 03lb from the Wear, and Bill Gamblin caught an eel of 1 – 01lb also from the Wear.

Ryhope club members enjoyed a good trip to mid Norway, just North of Bergen last week. They encountered fine sport with 23 different species taken in weather that was into the 80s.  On the boat, Lee Hunter had a coalfish of 8 – 02lb, while Paul Richardson had a torsk of 15 – 02lb and a haddock of 9 – 08lb.  From the shore, Gary Warwick had a halibut of 6 – 11lb; Paul Richardson had a haddock of 5 – 03lb; Andy Hardy had a sea trout of 3 – 08lb; Ken Hailey had a cuckoo wrasse of 2 – 08lb; John Wilson had a herring of 2 – 03lb; and Bob Surtess had a Pollack of 6 – 11lb amongst huge numbers of mackerel.