During the second week in March we had some pretty mixed weather fortunes in Holyhead; both sunshine and rain in equal amounts and the winds not quite knowing what they should be doing. So it was great on Friday evening to finally check the weather and be in a position to say yes to the voices on the end of the phone. 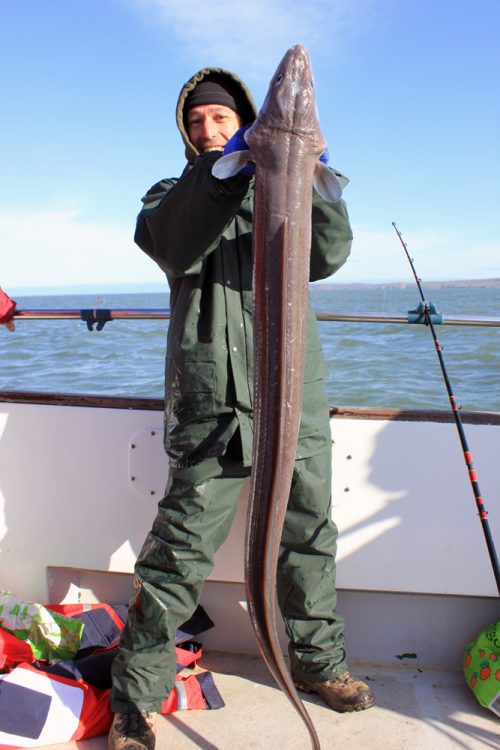 Once again, the more settled weather early season had fallen on spring tides, big springs as well, with both days just under 33ft in height. Not a terrible thing, but owing to the big tidal strengths around our area of operation it restricts our movements to inshore work, a good day of mixed species for early March was though still on the cards.

The weekend aboard My Way was filled by two local groups of anglers, keen to make the most of the settled spell. However fishing in the bay on a big tide at this time of year can be hard work at times. Saturday I had decided to try a small patch of rough ground that I’d not fished before for the first hour and see what happened. It wasn’t long before dropping anchor that the dogfish moved in on our baits, with single and double shots coming over the sides. Not too bad a start, at least fish were present

We also had the odd small codling and pouting before Caernarfon angler Clive grabbed hold of his fishing rod as it received a few thumping bites. Using only general scratch rigs with small hooks it was now a battle of wills between Clive and whatever had taken his bait. Slackening off the drag to take care of any unforeseen dive from the fish and also slowly lifting the rod up to retrieve on the downward motion Clive skilfully brought the fish to the surface of the sea.

While the battle continued we discussed what Clive had hooked, bull huss or thornback were the main suspects, at which point it also needed to be clarified what the £5 a head pool money was for – largest fish, most fish, most species or … sexiest fish! The largest fish was the decision of the on board crew. When the surface was finally broken, Clive had played a cracking small conger of 16lb. Great catch for inshore and a superb testimony to his angling skills and My Way rigs!

We had a move later on in the day to a patch of more broken ground and were rewarded with fish and a few additional species. Dogfish made up the bulk of the catches along with a good number of huss, the odd codling, whiting and poor cod. The day though was enhanced considerably with a couple of dozen coalfish. Not monsters at a few pounds in weight, but tasty fish that went home with the lads. Back at the new mark to finish the last hour of the day and among the smaller fish we also managed to haul out a couple thornback rays, a nice end to an enjoyable day.

Sunday we once again started the day on our new mark; with a bit more tide I hoped we’d maybe see more eels or rays. Thankfully we were rewarded early on with six thornbacks hitting the deck of My Way, although small at between 3 and 6lb they were still first rays for the majority of captors. Sadly the largest thornback threw the hook just as it broke surface, it looked double figures as it swam away. 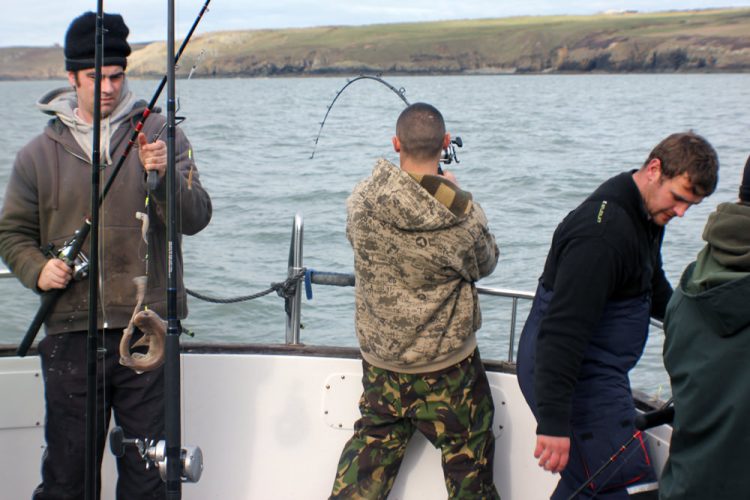 Leaving this mark, we tried a favourite spot on the mussel beds over HW slack; however this proved a bad move, with only a few dogs coming to the boat over the next hour. Normally a very productive area, early spring can be a little hit and miss when fishing the more tidal areas.

The rest of the day was similar to that of Saturday, with bull huss, coalfish, Whiting and small codling joining the fun along with a few other species. A nice mixed bag of species and a good session for an early March weekend.