During the last couple weeks of March, along with the rest of the country, Anglesey basked in some wonderful weather. The glorious sunshine with little or no wind meant a few days afloat with mixed fortunes for our anglers. This early in our season the fishing can be a little bit hit and miss when targeting specific species. However, setting out with a wide selection of rigs and baits can help anglers to a healthy, spring mixed bag.

Setting sail on calm days in March or April is superb and when the anchor is dropped only the sound of fish being caught and banter on deck breaks what can be an eerie silence. Summer time, we often have the roar of jet skis, water skiers and other boats disturbing the silence as the day passes, more so at weekends. At this time of year, similar to mid-week trips, it’s strange to have only the engine of My Way breaking the silence for residents of the marina.

During one memorable trip, with the majority of the 10 rods aboard being novice anglers, we concentrated our fishing inshore around Holyhead Bay. The task ahead of us was to catch any fish that were there and hopefully a good variety of species. The medium tide ensured that we didn’t have to go too heavy on our leads and were able to use a selection of different scratching rigs to tempt a variety of species.

With the ever present dogfish coming to the boat interspersed with some small whiting it was good to see Jodie, one of our female anglers, break rank and show the lads how to catch a thornback ray when she landed her first of this species. At the bow of the boat her sister Freya was happily catching double shots of fish, much to the annoyance once more of the guys, and her catch included our first sea scorpion of the year.

Further excitement was evident on deck when a few plump coalfish came aboard; several of the anglers then stopped everything for sushi. One of the lads had brought along a top quality sushi making kit, rice vegetables and dips and we simply had to provide the fish. I then watched on as in a very professional manner despite rocking boat our chef expertly prepared the raw fish meal. The end product did surprise me as it looked identical to what you see in magazines or online food websites and the food was enjoyed by most of the guests.

This year’s Home International Boat Championship is to be hosted by the Welsh Federation of Sea Anglers. The event brings together some of the best anglers from the four homes nations, England, Ireland, Scotland and Wales, in what should be a hard fought battle, where pride and bragging rights go rightfully alongside the gold medals.

Running from Holyhead, the 2012 event will be fished aboard local charter boats My Way, Spindrift and Empress with Boy Evin as reserve vessel. The anglers will fish both at anchor and on the drift for a variety of species through the catch & release event. Points are then awarded relative to the ease of capture for any of the qualifying species. It was during an official practice day for the Welsh National Boat Angling Team that we had our first couple blondes’ rays in 2012. 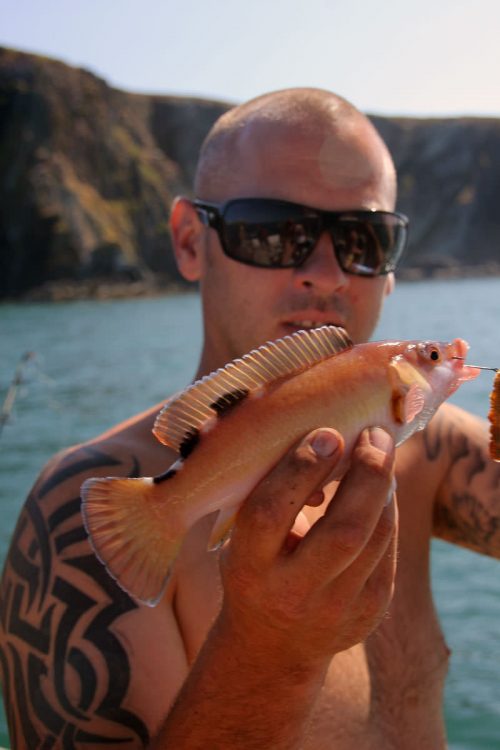 The practice was to be used to become accustomed to the tidal strength and differing sea bed, but the unexpected happened when John Traynor lifted his telescopic rod to strike and was soon playing a respectable blonde ray of 13lb.

Our first trip out to deeper waters situated west of Anglesey saw a group of My Way regulars from Wrexham rewarded with a good number of quality spurdog. All that is except organiser Mike and crewman Harry who both took a barrage of abuse from anglers into their 2nd spurdog before our intrepid duo had even hooked into a dogfish.

Many spurs and bull huss made up the bulk of the catch from the deeps, with dogfish adding to the overall numbers of fish landed. With the spurdog weighing an average of 12lb, it was another great start to the season for our offshore exploits. As time goes by rewards for those willing to fish the deep water with heavy leads should also include huss in excess of 15lb and some hard fighting tope.