Mathew Gets His First Ray

Not bad weather at the moment and a few fish around the Lancashire coast. Just waiting on some westerly winds to stir it up a bit and bring some bigger numbers of cod in.

Allan Cordwell headed out with son Mathew on the Kingfisher charter boat from Fleetwood after the last couple of outings on the pier resulting in whiting fests.

The pair hoped to find Mathew his first ray as they set off from a rainy Manchester and arrived at Bispham Angling to pick up excellent large fresh worm from Jordan Russell. After breakfast they met up with Paul Fulcher and David Playforth on Fleetwood Beach around 11:00 hrs.

They boarded the Kingfisher and steamed out into the bay where the anchor was dropped. Allan rigged up Mathew with a long snood 3/0 Wessex rig baited with fresh black worm tipped with squid and a long snood running ledger with 4/0 & 5/0 pennel baited with full illex squid for himself.

It wasn’t long before Mathew was nailing fish after fish and proving his competence with the multiplier and timing his strikes perfectly. He landed numerous flounder, dabs, whiting and dogfish. Allan’s bigger baits accounted for a couple of large dogfish on the squid and wraps. 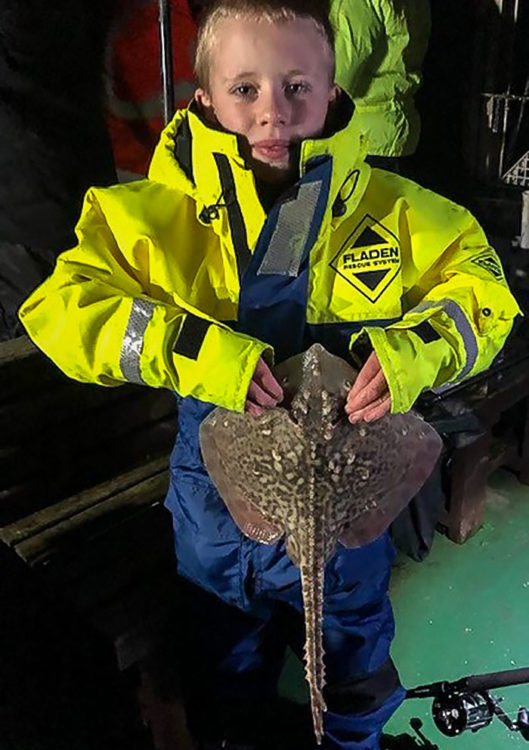 Mathew with his ray

This continued for a few hours before the decision was made to relocate to deeper water. The new mark was slower but larger worm and fish baits were dropped in the hope of a decent fish being in the vicinity. The fishing continued slowly with dogs, whiting, flounder being accounted for.

Plenty of banter on board kept the spirits up an eventually the large baited rod arched over after a couple of sharp knocks and Allan lifted into what felt like a very good ray, running parallel to the port side of the boat. Sadly, the hook-hold was not sufficient to keep contact with the fish and was duly lost.

The rod was re-baited and shortly after Mathew calmly brought my attention to him being attached to what was obviously not a small fish. He played the fish well in a fast running tide and subsequently landed his first ever thornback ray. He was chuffed to bits and handled the fish well prior to gently returning it to the deeps. Job done with target acquired!

They continued for a short while in the dark with more flounder, dabs and other species until the decision to head for return to the shore was agreed. A great day overall with good company and many thanks to Paul Fulcher for organising the trip and David Playforth for keeping an eye on my boy with me and excellent bait as ever from Jordan Russell. 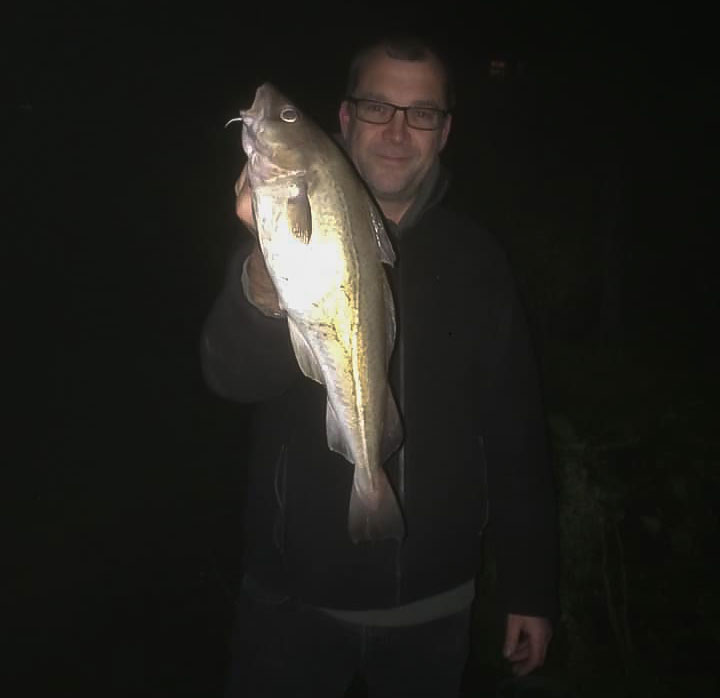 The Golden Peg card was won by Stuart Pilkington and the raffle by John Lee..Once again quality bait from Jordan at Bispham Angling.