There are plenty of sole still around the Lancashire coast with some nice bass, the odd flounder and plaice. The pup tope are getting bigger with some being around the 4lb mark. Fleetwood channel has been producing smoothhounds over low water.

Meanwhile the boats are fishing very well with lots of gurnard, tope, smoothhounds, codling, whiting and plaice. Best bait of the week has been the rag worm again. Favoured rigs for the smaller fish are the flappers with a pennel rig for the bigger fish.

As the temperature of the sea starts to decline and the algae bloom dies back the re-oxygenated waters should help bring the fish back inshore.

Blackpool Federation SAC held its seventh match of the season on the 5th of August 2018 at Fleetwood with fishing from 9:00 to 12:00, the last 3 hours of the ebb. The fishing was patchy with mainly flounder and eels being caught, however three good size smoothhounds were caught during the match. 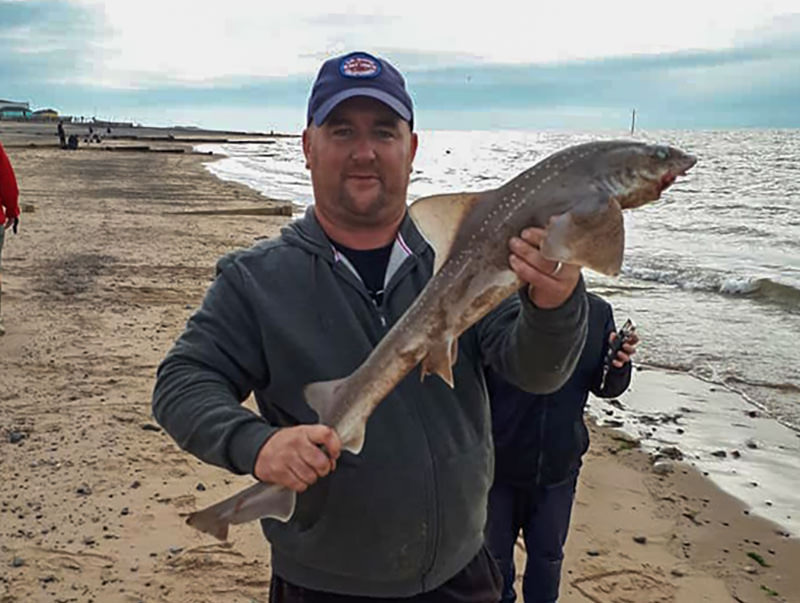 Chris Minto with a smoothound from the Fleetwood channel

The team event was won by H&A A with two fish, smoothhounds of 84cm and 61cm for 329 points. Second place went to LMS A with three eels, two flounder and a hound for 126 points and in third was H&A C with three flounders for 38 points.

The top individual was Bob Scullion (H&A C) with two smoothies for 329 pts, both caught on frozen peeler crab. Runner-up Iain Hewitt (LMS A) had three eels, a flounder and a smoothhound for 108 pts and third placed was Tom Tate landed three flounder for 38 pts.

Fleetwood and District Angling fished a worm and fish bait only match at Stanah. The fishing could only be described as rubbish. Of the 10 anglers who fished only three caught fish. This is probably down to the weather, which seems to have had a detrimental effect over the past few weeks.

Not being allowed to use crab more than likely resulted in fewer fish, but even allowing for that the fishing in the river has been dire.

John Hodgson was the winner with two flounder for 12 points, second position went to Peter Lambert with an eel for 7 points and in third place John Hughes had a flounder for 6 points.

A bit of a conundrum for the Club with this match, do they use crab and hopefully get more fish, but maybe fewer anglers or worm only, possibly fewer fish, but more anglers.