A short one this week I’m afraid as the fishing is very similar to previous weeks and with no matches allowed over lockdown the Club reports are not available.

Dave Brown fished Rossall Point where he had a doggie or whiting every cast but unfortunately nothing else. Five dogfish and 8-10 whiting for the session. There was lots of grass and leaves floating about during the first hour but then it cleared up.

Lee Paul tried low water again and he wasn’t going to hunt a specific species after the previous day’s luck as you can guarantee it would end up with disappointment. Lee went armed with multiple rigs and some black lugworm and squid / mackerel wraps.

He loaded a 3/0 flapper rig with worm and sat in wait. Hour and a half past with no joy, Lee kept changing for fresh worm every half hour and just after one o’clock he had his first knock and in came a pin whiting to save the blank. 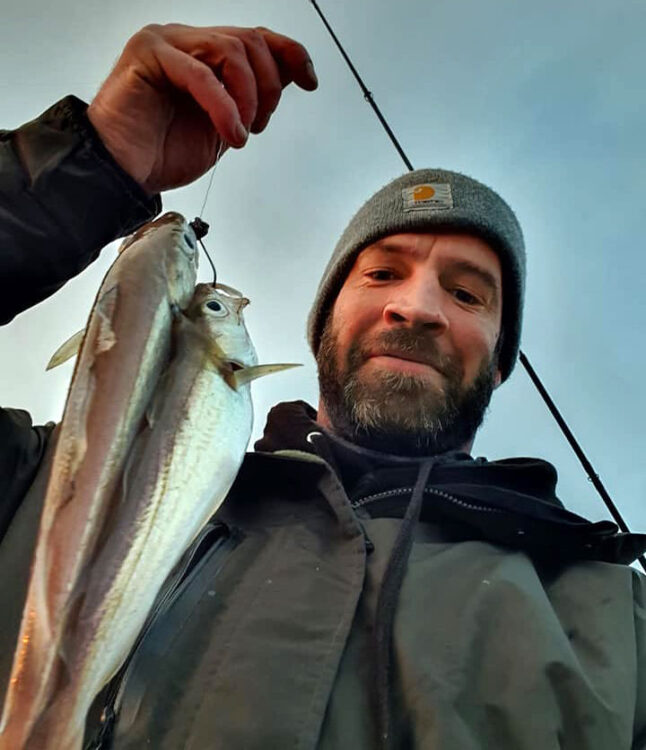 Lee with a whiting double

Lee then baited a 4/0 pulley pennel with worm and a wrap and waded out and tried at distance, 20mins later he had a lovely knock and praying for a bass, in came a lovely doggie. He switched back to worm on the 3/0 flapper, and after ten minutes and in came a rocking.

Doom and gloom set in as he thought this was the end of play. The tide was rushing in now at 2pm and he had to wade out to find the deep water in the channel. The rod bounced with a great knock, the fish felt decent only to lose it on (guessing) the ledge of the channel.

The sea went quiet for the next couple of hours and as the tide pushed him against the rocks forcing a move.

Lee headed south a couple of bays and back into the water. Around 4pm a good bite resulted in a bass. He changed back to a flapper looking for a plaice and the rod went again half an hour later producing a double whiting. A good session and happy with his haul Lee packed up and tootled off till next time.