Shortly after the Fish-offs a couple of weeks ago Martin Kennedy from Shamrock Tackle and Kit Dunne, Irish Team Member, decided to run an event to raise funds to support the Irish Team travelling to Montenegro next year. It was clear from the time that Montenegro was chosen as the venue for the World Championships in 2010 that it was going to be a costly venture so any sponsorship, particularly in these hard times, would be very welcomed.

The competition was held last Saturday out of Cobh harbour. Though the plan was to travel to the “Ling Rocks” just off Kinsale the weather force us to remain inside the harbour. Despite the short notice and the appalling weather we had almost 60 anglers booked in to fish the event. This support was overwhelming and unexpected. However the bad forecast for the day made a good few change their mind; still a very respectable 43 anglers showed on the day to battle the environment and fish in support of the Team.

The fishing itself was poor enough. There was a lot of fresh water in the harbour and the weather on the day didn’t disappoint our worst expectations either. During the day it freshened up to a healthy force 8 to 9 with the rain coming down in ways that even the Irish considered it wet! Nevertheless a few fish were caught.

In making it a fun event and trying to give everybody a good chance of getting into the prizes the focus was put on quality rather than quantity. First prize was to be given to the angler with the heaviest fish, the second for the longest and the third for most species. There were many more prizes afterwards for the longest fish of each species, best skipper, boat with the best laughter and more. Prizes were exceptionally good and everybody on the pier in the morning assumed that it would need a decent size cod of 6lbs + or a blonde ray to snatch one of the first two prizes.

Well, we were all wrong; wrong to an extent that most of the biggest and longest fish were all released without being weighed on shore. Who had expected that an lsd would win this. Dave Jolly released two dogs (both the longest fish of the day) without even thinking that one of them would be in with a chance of being the heaviest fish of the day. He wasn’t the only one but this mistake cost him Euro 500.00 for the first prize. There were still a few codling and whiting with the odd coalie, dab, pouting and poor cod caught but in general the fishing was poor. 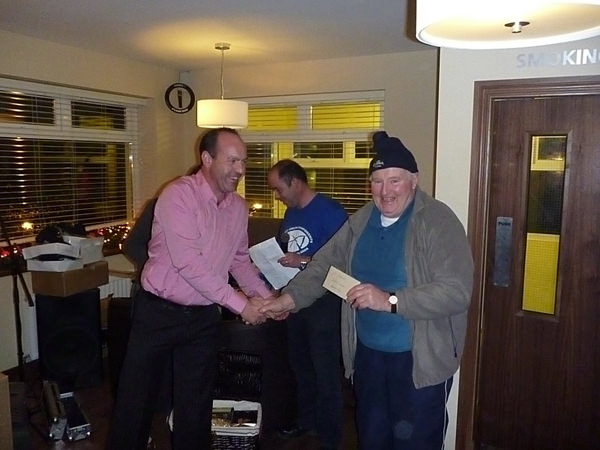 All anglers were eagerly awaiting 15.00hrs; the time for lines up and the opportunity to get some shelter in the bar of the Bellavista Hotel. This event would have not happened without the very generous support from Kevin, the owner of the Hotel. Not only did he offer a good overnight package, a two course meal for Euro 15.00, plenty of finger food and a couple of spot prizes; he also sponsored a prize worth Euro 1000.00 (a five day all inclusive angling holiday voucher). Needless to say that he also was fishing the event. The Commodore Hotel sponsored the third overall prize.  The skippers supported the event by providing the boats for a big discount (Dony Geary gave a couple of Reels), Martin gave Shamrock tackle. A few other private sponsors, who asked not to be named, discretely supported the event. Each of the team members also came up with some prizes which made the prize table look very impressive.

First prize of Euro 500.00 was won by John Cronin for a whiting of 500grm and 40cm length. Dave Jolly’s 67cm lsd won him second prize, one weeks Holiday sponsored by the Bellavista and Pat Wright won the prize for most species. His four species secured him a weekend break for two at the Commodore Hotel. There were too many prizes to list them all but David Lynch’s achievement of winning most species Junior, Doreen Byrne and Sandra O’Shea most species Ladies and Polly Polock for best Newcomer are worth being mentioned.

The competition turned out to be a great event thanks to all the anglers taking part, thanks to all the sponsors and in particular thanks to Martin and Kit who managed to get this event organised within a very short timeframe. We are convinced that the turn out would have exceeded 60+ if not more had the weather not been better. It has been suggested by a number of people that this should become an annual event in aid of the Irish Team.  Most outstanding, though, was the atmosphere, the support given by everybody, the comradeship and the interest in the Team representing Ireland.

On behalf of the Irish Team I’d like to thank everybody again who were involved in making this event happen and I also would like to wish everybody a Merry Christmas and a Happy New Year.