The Irish Federation of Sea Anglers (IFSA), decided in 2008 that the international team selection procedure was to be shaken up and improved. Previously it was enough to make the top five of the Irish Master Angler to qualify for the CIPS World Boat Championship, but this changed at last year’s AGM when a new system establishing a squad of thirty-two of the top Irish anglers was accepted. A fish-off team trial would now take place among the squad each year to select four world team members and the reserves. The winner of the Irish Masters is automatically selected and becomes team captain. 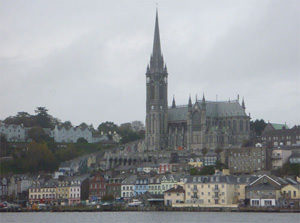 In order to ensure that newcomers have access to the squad the ‘top 10’ from the Master Angler replace the ‘bottom 10’ from the previous year’s fish-off. The fish-off this year was based on the top 10 of 2007, 2008 and the top 12 of 2009.  Four boats with eight anglers, partook in four separate fishing sessions of three hours duration over the weekend. CIPS rules were applied, with static bottom rigs being the only permitted method. There would be no Gilling etc as such methods are not permitted at the world championships. The  World Boat Championship scoring system was adopted to ensure angler familiarity in advance of the event proper.

The four boat winners from each session would receive 1 to 4 points, with the top score being awarded one point and the lowest boat winner four points. Boat second places would get 5-8 points, and so on down to the lowest scoring angler who would receive 32 points. The five anglers with the lowest overall points qualify for the Worlds. This year qualifiers would go down to 6th place as Heiko Dreier, who finished second, had already qualified as winner of the Irish Masters. A local angler was appointed steward aboard each boat to deal with the scoring of the fish.

Bait was provided and each angler received a box of Squid, 40 rag and two packs of frozen mackerel per day. Cobh harbour was the venue and the draw was held in the Commodore Hotel on the Friday night prior to the fishing. Given the quality of the anglers it was no surprise that some really tough boats were drawn. Qualifying wasn’t easy and only three anglers managed to win their boat twice. Plenty of rain during the week leading up to the match meant an abundance of fresh water in the harbour which affected the catches. Organisers had decided fishing would be confined to the harbour for fairness across all boats. The focus was on quantity of fish with a scorecard designed to give high points per fish regardless of species, and comparably low ‘species points’ to mirror CIPS rules.

Fishing was better than expected, despite the wind and rain. Tides were fast and speed fishing downtide won the first session each day, with uptiding being the better option for the second session on most boats. Whiting were the predominant species and together with dabs, lesser spotted dogfish amd poor cod made up the bulk of the catches. A small tope to team regular Kit Dunne was a pleasant surprise. Results after day one showed some of the excellent local and west coast anglers struggling. Leading the field was John Dennehy followed by Pio Enright in second and third placed Dermot O’Brien.

Sunday was tougher with stronger winds and more rain diluting the harbour marks. Nevertheless some anglers managed over 100 whiting in the first session, with the second session poorer. The same species formed the bulk of the catches. Tension was high back on the pier as anglers tried to figure out who would fill the six team places in Montenegro 2010.  John Martin announced the results later that afternoon in the Commodore hotel.The Irish team for next year is as follows… 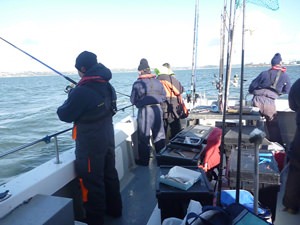 Congratulations to both the successful anglers on qualifying for the team and the organisers for setting up a structure which should stand the IFSA boat teams in good stead for the coming years. Certain other home nation Federations should take note.