Joe fished with a Century Tip Tornado while Terry favoured the Sport Response. Both fished big blue baits on pulley rigged 6/0 Mustad Viking hooks. The strong north easterly winds meant that the favoured marks were unfishable but the lads still managed to land to cod to six pounds and haddock to three pounds from a newly discovered mark. 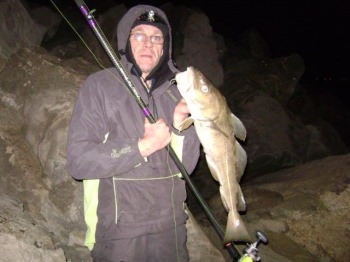 The next day the trio were joined by local angler Nick Sparkes on the same mark. Again plenty of sizeable flounders and dabs put in an appearance and the day was rounded off with a session in the dark when a succession of cod to 6lb were landed. Large dabs proved a problem, hitting the baits before the cod could get in on the action. Terry was spooled by a large fish which headed for the horizon before breaking him off, a halibut or large coalfish are the likely suspects.