Plenty of anglers fishing at the moment making most of the sport while there are plenty of fish around. The Gynn Wall has produced sole, dabs, whiting, dogfish a couple of turbot and also a couple of codling. Further up the coast Cleveleys and Rossall, both low water and high tide have produced plenty of codling along with whiting and dogfish.

Carl Dady and his mate Marc fished last night at Rossall over low water and landed plenty of fish. Marc caught his first ever codling and Carl had half a dozen codling with the biggest going 4lb 2oz, he also lost a couple as well. All fish where caught using live yellow tails. 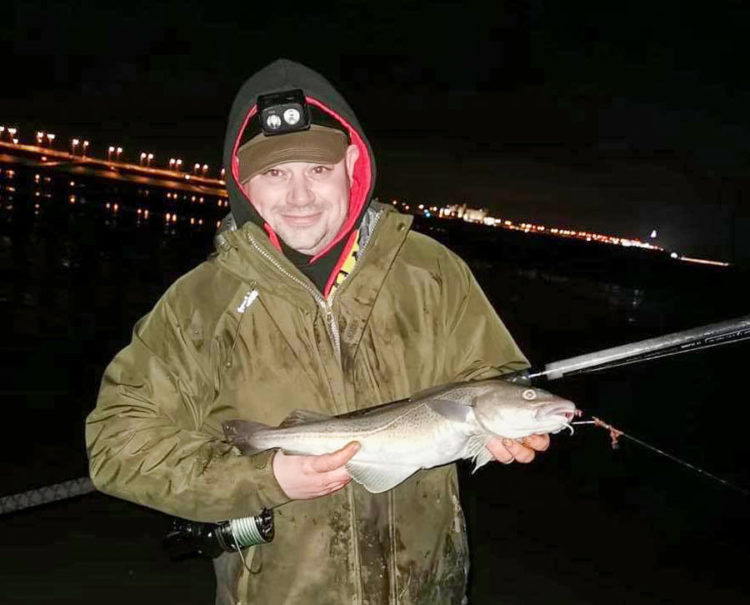 Carl Dady with a codling

Carl Lawton reports that he and Simon Calligan fished low water at Rossall one hour down and an hour and a half up. They had whiting, dogfish and a nice thornback all taken on black lug and mackerel wraps.

Pier member Allan Cordwell was out for an early start so he could catch the end of the ebb and fish the following flood and ebb. His bait had already been sourced the day previously from Jordan Russell at Bispham Angling when I picked up my bi-monthly frozen order so it was a direct run to the pier at silly o’clock.

Andrew Adams had also confirmed he would meet up at the venue but was delayed. Allan set up on the North Corner due to the success of last week’s session and quickly put a single rod out on a 3/0 loop rig baited with fresh black on one hook and three yellow tails and prawn on the other while he made up some wraps for the second rod which would be fished on the flood using a 3/0 -4/0 sliding pennel rig. 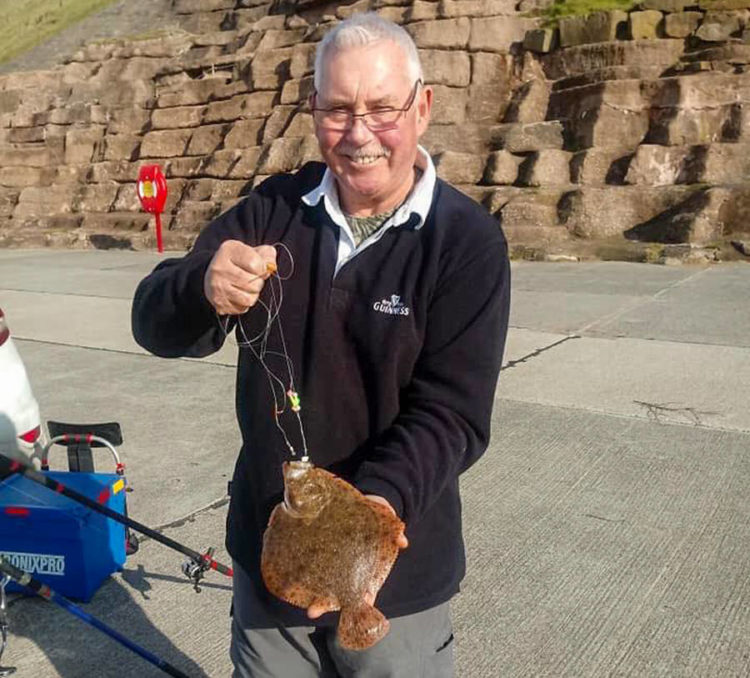 David Wilson with a turbot caught from the Wall

There were bites from the off with good sized whiting, flounder and dabs picking up the baits. He continued with the worm baits in search of a late bass, keeping fresh baits going in every 10 minutes. With the water at the base of the pier Allan decided to have one last cast into the channel and concentrate on finishing making up the remainder of the bait for wraps.

The rod suddenly lurched down and was pulled level and he lifted into a nice sized fish, “bass!” he thought, as it felt solid and was thumping. He was amazed to see a nice thornback come to the surface. The fish was decked and as Andy hadn’t arrived, he embarked on a retrospectively funny effort in taking a selfie with a very angry ray who proceeded to keep slapping him in the face repeatedly with its wet slimy wing. The fish was duly returned via a section of the pier with deeper water.

Andy arrived and set up as Allan finished his wraps and they had a brew. The duo were joined by pier member Paul and they proceeded to put the world to rights over a hot cuppa. The flood commenced and they returned to their fishing positions and cast out the rods.

The water was flat and the sun was now blazing down, this wasn’t ideal conditions at all for the bigger specimens Allan was after. However, it was fish from the off with flatties and whiting falling to the fresh baits. This continued with some nice sized whiting being landed. It wasn’t long before the dogfish arrived and they were in plague proportions. Allan had already lost count of the numbers of fish they had landed and the dogfish were ravaging everything we put out including the large wraps he was using.

In an effort to keep a bait in the water, Allan put out a 24 cm whiting on 5/0-6/0 Pennel. It wasn’t out long when the rod knocked a few times, pulled over and slack-lined. He bent into what felt like a decent sized fish hoping it was a small huss, sadly, it was another very greedy but large dogfish. The dogfish continued until a couple of hours before high where upon my wrap rod was lifted off the ground and he lifted into a ray. It was expertly netted by Andy and as I was unhooking that one, the worm rod arched over and subsequently, another ray came onto the deck.

The dogfish returned up to high and then all went quiet with just the odd flattie and pin whiting being landed. The sky was darkening and wind was picking up and slowly swung round to a cold northerly putting a nice chop on the water and creating some movement at last. 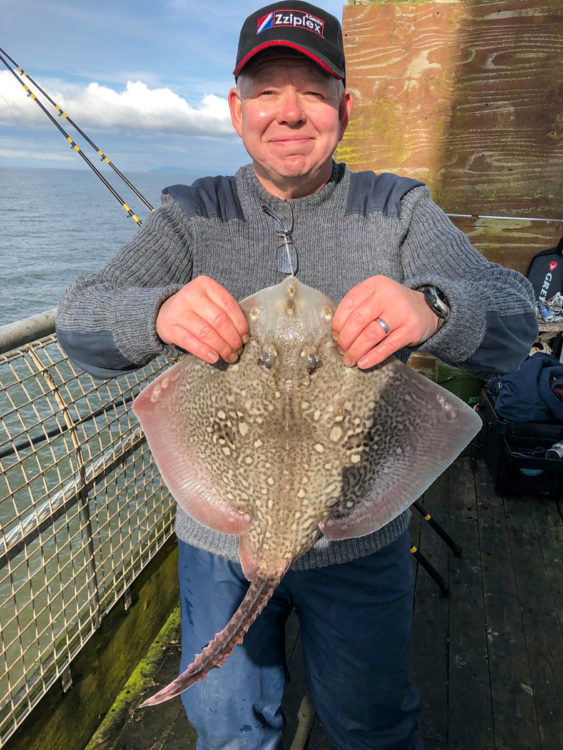 Alan with one of his rays

Eventually, the rods started showing bites with more dogfish and flatties falling to the baits. Another two rays were landed as darkness fell and the group decided to pack up and call it a night.

We had landed a huge number of fish and Allan was more than happy with a tally of five thornbacks in total, nothing massive but a respectable effort given the conditions. Thanks go out again to Andy for the assistance with the net and taking the pictures and also to Jordan Russell for the excellent quality fresh bait as always. A final big ray or huss is still on the cards!

Metres Of Fish In The Bev Faithfull Shield