The chairman of the EFSA Iceland section, Skarphéðinn Ásbjörnsson, and his wife Lina were fishing last week from the port of Dalvik in northern Iceland. For the first couple of hours the fishing was steady but not spectacular when they drifted over mixed ground in depths of 25 to 35 metres. Cod and coalfish to 3kg were attacking the home made flies, on chunky 6/0 hooks. Skarphéðinn was fishing with three lures on flyers above the lead and one below and the most successful fly was a black one with a red tag tail and shiny metal balls down the shank of the hook.

A good thump on the rod and a spirited fight saw a 15kg cod hauled over the gunwhales on the trailing hook. During the next 30 minutes action was hectic with cod between 10 and 15kg smashing into the lures.

With thoughts of bigger fish Skarphéðinn stuck a coalfish bait on the bottom hook and lowered it to the sea bed. Almost instantly the rod bent double with what was obviously a good fish. The dogged fight made it difficult to be sure just what had snaffled his bait but whatever it was, it was certainly a substantial fish. 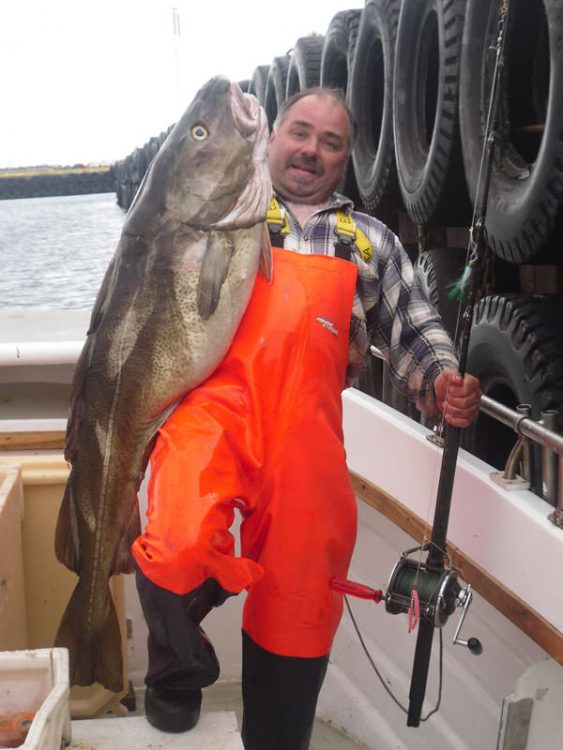 The next quarter of an hour saw first the fish and then the angler struggling to gain the upper hand. Little by little Skarphéðinn managed to regain line onto the reel and eventually the fish broke the surface. Skarphéðinn froze, for seconds he just looked in amazement at the size of the massive beast. An abortive attempt to gaff the fish in the head, it simply bounced off! A second, more successful attempt saw Skarphéðinn slip the gaff into the fish’s gills and it was only then that he realised that he still had to lift the fish into the boat.  A one handed lift failed and it was only by dumping his rod and using both hands and the lift of the waves that the leviathan eventually landed on the deck, destroying the heavy nylon trace in the process.

The fish bumped the scales down back on shore and topped out at 28kg, truly a tremendous cod.