Ally Campbell reports on a brand new boat fishing competition hosted by EFSA Scotland in the waters of Loch Etive.

EFSA Scotland added a new competition to this year’s calendar which introduced a slightly different slant to that of already established Scottish events. The new ‘Species’ based competition was held on Loch Etive on the picturesque west coast on May 7th. Traditionally, this location is regarded as a spurdog hotspot, but regular visitors know a far wider diversity of species inhabit the loch. 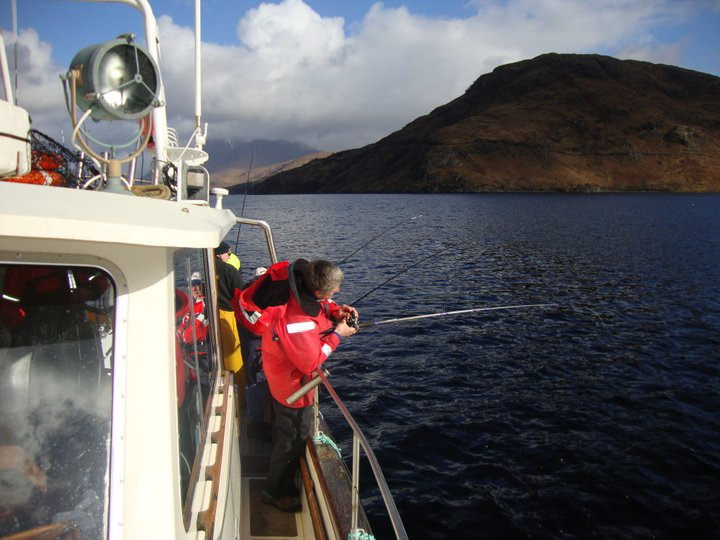 The points system was weighted to award those catching more different species, and the normal size limits were waived to ensure that all fish scored. The ability to catch numbers of small fish is an essential skill in modern boat-match fishing, and the fact that organisers embraced this was well received. A maximum of 10 of each specie were counted; the first five fish of each scoring 3 points, with the second five scoring 1 point each. Additionally, there was 10 bonus points factored for each species caught. Cod, dab, gurnard, haddock, ling, lsd, mackerel, pollack, pouting, poor cod, thornback, coalfish, spurdog, whiting and wrasse are among the more common Loch Etive species.

Loch Etive is less than two hours drive from Glasgow, and more or less an ‘all weather’ venue with cancellations rare. The normal assembly and pick-up point is Taynuilt slip. The competition boats were Colin Currie’s Creagallan and Miss Claudia skippered by Donald Maclean. Embarking on the day was at the civilised time of 09:00.

I was drawn on the Creagallan and was fishing at anchor within minutes of departure. The mark was relatively shallow for Loch Etive, and a far cry from the near 500ft notorious depths to be found in the mid and upper loch. Thornbacks to 8lb and gurnards were first to show. Most fish were caught on the bottom and fell to fish-baited luminous lures and beads. A move to a deeper mark in the loch produced a few spurdog, spotted dogfish and pout.

News over the radio of better catches and numbers of coalfish and gurnards prompted another move back to the shallower lower loch. Alas the fishing proved similarly slack and the final hour, fishing close to the slipway, was hard work. Despite low fish numbers this last hour proved crucial aboard Creagallan with Stevie Burns picking out some coalies, gurnard and a last breath, jammy cod to sneak the top score and 100% by the skin of his teeth.

The sceranio was similarly played out on Miss Claudia. The boat began by fishing a 100ft mark at the mouth of the river Awe, where odd pout, coalie and codling were boated. Billy Murray moved into an early lead with three species on his scorecard. Low water signalled a dead period and the boat moved to a fresh mark in 80 feet of water. With the tide just beginning to push through when they arrived, the anglers enjoyed a short flurry of fish, including codling and pollack from the reef edge before voting to move again.

The move out into deeper water produced whiting, spurs and some lsds. At the final whistle the lead was close to call with three anglers all tied on six species apiece. Scott Gibson scraped over the line by a whisker, totaling 104 points from John Speirs on 103 and Billy McCormack on 101.

The post mortem concluded that Miss Claudia had enjoyed the better fishing. Methil-based Scott Gibson emerged top on the day, with Edinburgh’s Stevie Burns in second place. The move to ‘no size limits’ worked very well here, and without it there would undoubtedly have been several anglers without a fish to their names. Overall the competition was well received and the general feeling among the anglers was that if the same format was applied to a summer match in Loch Etive then the catches could be very good indeed.