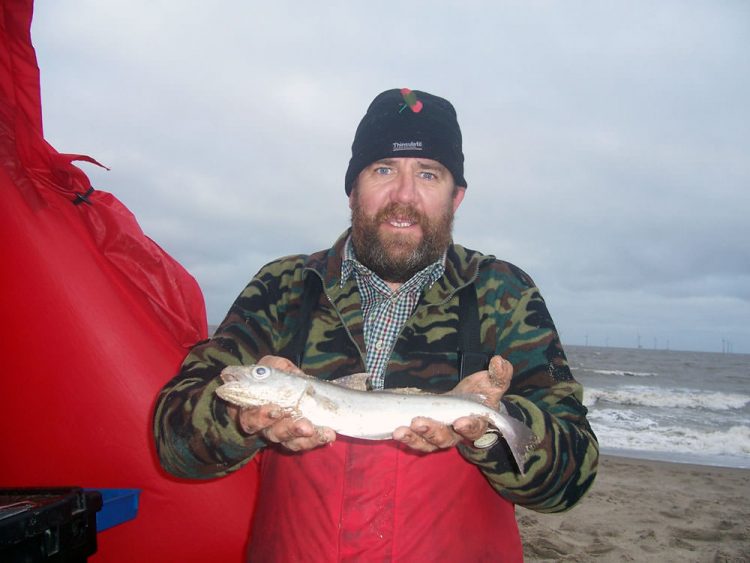 Jackson’s Corner beach showed once again why it is rated as one of the top whiting venues along the Lincolnshire coast, in the latest Skegness Pier Angling Club (S.P.A.C) match for the Beachcomber Trophy. Despite the rough conditions, there were 187 fish caught by the 13 anglers, with the top three all weighing in double figure bags. Corby’s Paul Marshall continued with his current rich vein of form to run out a comfortable winner, with 25 whiting and a flounder weighing 15lb 6¼oz. Neil Jackson from Lincoln caught steadily throughout the match to come in second with 26 whiting and a dab totalling 13lb 4oz. He also won the heaviest round fish prize with his best whiting, which tipped the scales at 1lb 3oz. Woburn’s Dave Shorthouse had a ding dong battle with Neil up until the last half hour, but in the end had to settle for third place with 24 whiting weighing 12lb 14½oz. There was a tie for the heaviest flatfish award with Wrangle’s Paul Cridland and Bob Foster of Kettering each catching 1lb 2oz flounders. Both semi-finals of the inaugural SPAC Knockout were completed on the day, with Neil Jackson upsetting the form book with his narrow victory over number one seed Dave Shorthouse and Alan Steadman from Wrangle comfortably beating Mablethorpe’s Kevin Bebbington.

The next SPAC match will be held on Sunday 20th Nov from 11am till 3pm at Chapel Six Marsh, with Club members fishing for the A Smith Cup. There is also an open section, which non-members are welcome to participate in. For further information please contact SPAC Secretary Chas Tibble on 07984 967988 or chastibble@hotmail.com