The 4th annual Norfolk Sea Angling Festival took place on Saturday the 7th and Sunday the 8th of April, along the coastline of North Norfolk. The boundaries were from Cromer Pier to Cley, with 39 anglers competing to catch the single heaviest fish each day, and then combining their daily weights for the two day overall position and a chance to win the top prize of £500, subject to entries.

Other prizes on the table this year were the heaviest flatfish over the two days and the heaviest single bass which was a catch and release conversion due to current EU laws. Four juniors and four ladies also competed for separate prizes, and with prizes down to 10th place everyone has a chance in this fun family event ran by the Norfolk Angling Club. Sponsorship and Support this year was again from Colmic UK and Rite Gear Angling Centre, so a big thank you to Shaun Stockley and Adam Nurse from Colmic UK.

With spring finally in the air and the last few weeks throwing up some decent codling, bass and dogfish expectations were running high and maybe this year, as with four years ago, some spring codling would make a welcome appearance.

On Saturday we were greeted by a lovely sunny day for the Norfolk Sea Angling Festival with light winds and perfect spring conditions. As anglers began returning with fish the rumour mill had already been rife with talk of a 3lb plus codling being caught by Gary Medlar. This turned out to be a nice fish at 41cm but a tad short of the rumours. Helen Molloy had landed a lesser spotted dogfish on her first cast and this rumour proved to be correct, much to the dismay of her young England international son Adam Molloy who apparently now must wear a wig for the next teams of five match. As usual, within our area, there is always plenty of banter, with some good friendly rivalry. 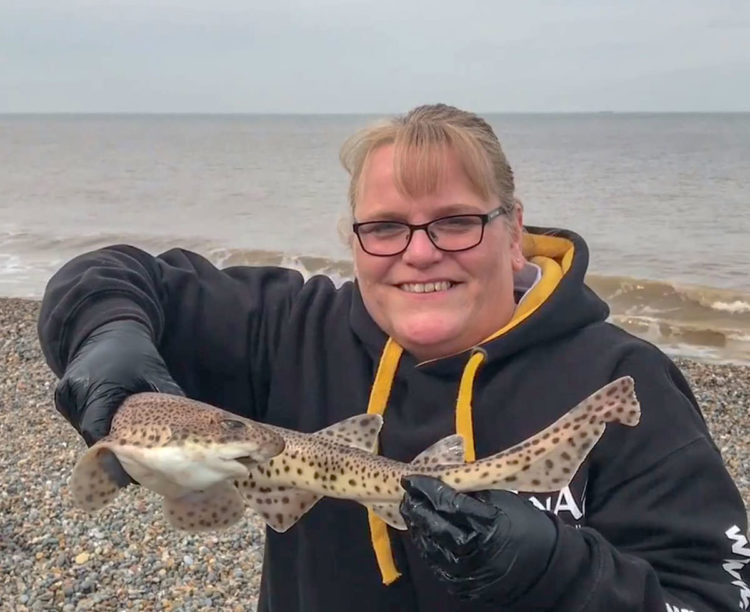 Helen with her dogfish on day one

Sadly only 18 anglers managed to find a sizeable round fish on day one and that included three of the four juniors, and two of the ladies, showing the men how it’s done. The biggest fish of the day was Helen Molloy’s cracking dogfish of 1.005kg.

All To Play For

Onto the second day and its all to play for. Those that blanked knew they had to find a sizeable fish to card to have a chance of getting into the top ten. The pressure was also on for those who carded on day one as they needed to add to their weight on day two. Decisions needed to be made whether to try for the main prize list or target the flatfish or bass for the species prize, or as many would do just go all out for a big fish.

Top fish on the day fell to Chris Clare, a lovely codling of 1.435kg. Reports filtered in that a sizeable bass had been caught by junior angler Curtis Taylor which at 45cm was measured, photographed and returned. It was turning out to be lads beating dads as Chris had also beaten his dad Chuff Clare over the weekend, Curtis beating his father Russell Taylor, Fynn Betts also beating his dad Darren Betts, so well done to all. 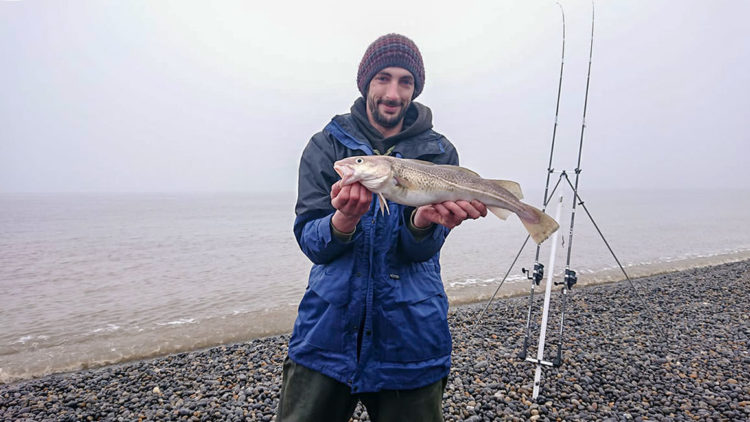 Chris Clare with his codling

A big well done to all competitors who brought fish back to the scales. The care given to these fish with regular changing of water throughout the match ensured that more than 60% of the fish caught were in fact returned alive and those that didn’t make went to local families and business owners for free.

Onto the final combined results from each day, we started the presentation with the Juniors, as always we try to make sure all get a prize and this year was no exception. Fourth place went to Adam Molloy and third place to Keiron Edwards. Runner-up was Curtis Taylor and top junior, in his first competition, was Fynn Betts, well done to all of you.

The Ladies were next to take the stage with Ros Stanley taking fourth place and Nicole Conway third. Second spot went to Stephanie Erison and top lady of the weekend was Helen Molloy.

Biggest Bass of the weekend went to junior rod Curtis Taylor with a 45cm specimen. And biggest flatfish was a 33cm flounder for Michael Gill

In the overall section Gary Medlar added a nice dogfish to his day one weight giving him a combined weight of 1.555kg and third place overall. Ian Nelson, who was in the frame last year, managed a dogfish on both days and took second place with a weight of 1.585kg.

In first place and the new Norfolk Sea Angling Festival Champion 2018 was Ian Childerhouse who also managed to card both days for a total weight of 1.690kg.

Let’s hope next year’s event is even bigger and better once again thank you to everyone who supported the event, including all competitors and all sponsors. 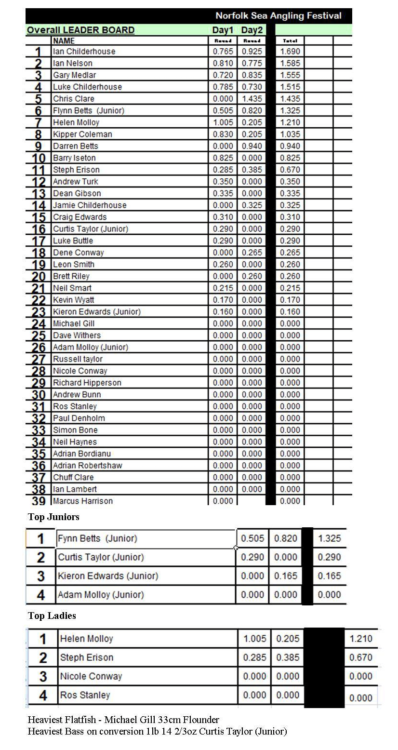