Beach session wins out over gardening

My mobile rang late yesterday morning and it was Paul Marshall. “Dave Burr and I are going to fish the beach at the back of my caravan this afternoon he said – the beach has been fishing really well and I will let you know if we catch anything”. My wife Sue wanted me to cut our unruly front hedge, but an hour or so on the beach watching a couple of top class match anglers ply their trade in a pleasure session was much more attractive! So straight after lunch I set off North along the sea wall on the bike, armed with my trusty old Kodak easyshare camera.

Ten minutes later I was walking down the beach, just as Paul was winding one of his rods in. The Century SRE had a healthy bend and I arrived just in time to watch him pull in a double shot of fat flounders, which both looked to be well over 1lb. Dave was fishing about 20 yards away and as Paul returned his flatties to the sea, he too wound in a double shot of decent flounders. For the next hour and a half fish came thick and fast, with every cast resulting in at least one fish and many double shots. All the fish caught were in superb condition – big thick flounders that had obviously been feeding well on the local crab population. About an hour before high water, Dave had a different sort of bite, with the sensitive tip of his long Sonik rod pulling hard over and staying bent. Whatever was on the end came reluctantly shore wards and then stuck close to the sea bed as Dave tried to ease it into the gentle surf. I said to Dave “it would be nice to see a thornback for a change” and a couple of minutes later he duly obliged, as a small ray came ashore on the top hook, closely followed by a big flounder on the bottom hook! Dave quickly unhooked both fish and returned them to the sea, just as Paul pulled in another double shot of a small bass and a cracking 38cm flounder. 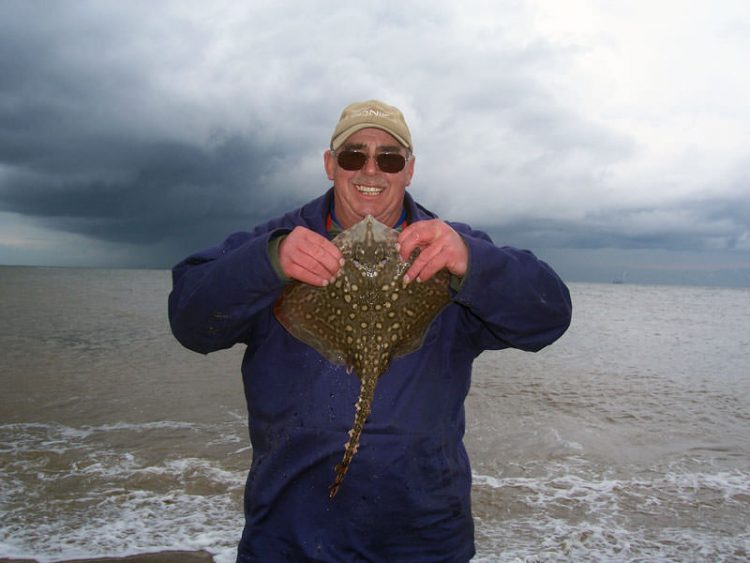 By now I was itching to get a slice of the action and Dave kindly lent me his spare Sonik, an ABU orange mag and a two hook loop rig. Half a peeler and a chunk of bluey were quickly lashed on, then never having cast the rod before, I launched into a gentle pendulum, which went a respectable distance. Five minutes later the tip nodded and not wishing to deep hook the fish, I sprang into action. Something weighty kicked strongly all the way in, and then just as the leader knot came into view, the fish gave a final kick and came off! So Chas managed to be the first to pull in without a fish on all afternoon. I only had time for two more casts, as I was under strict instructions from Sue not to be late home for tea at 5pm. Each cast resulted in a single fat flounder, one to crab and one to a big chunk of bluey, so at least I redeemed myself. Dave and Paul continued to catch all the way through the session and the final tally was about 30 fish between the two of them, which is a pretty good result for a pleasure fishing session, where neither angler was fishing flat out as they would do in a match. The fish came at all distances, with the majority to peeler, but plenty (including the thornback) being happy to munch on the bluey.

So all in all a very enjoyable afternoon and things are looking really good for the Lincolnshire Pairs from Trunch Lane in a fortnight. The front hedge got cut this morning by the way, as everything must come (eventually) to her who must be obeyed!!

Shads from the shore