The codling season has started with a vengeance with reports of fish in the 2lb-3lb range being caught from all venues. To be honest, it isn’t really any earlier than other seasons, as they usually appear on the last big tides of the summer and this year is no exception.

Both Walton and Clacton Piers have seen an influx of plump autumn codling, along with dogfish and some rays. The beaches have also had their fair share of fish this week, with thornback rays returning closer in to the beaches. Once again St Osyth beach is the place to be, with most of the rays being caught after dark, but if conditions are right they will also feed during the day. September is always a good month for sole and those bigger bass and reports are already looking good on the Clacton and Holland beaches. The Victoria Road area is seeing sole being caught as well as a few rays, and the Holland end has seen the bigger bass and codling.

Walton Sea Angling Club held their Pier Finals in very wet conditions on an ebb tide. The bites were slow to come, but as darkness fell the fish started to feed with pouting, codling, eels and a solitary sole being caught. Top angler on the night was Rob Tuck with 3lb 5oz, 2nd place went to Bill Paquette 1lb 13oz, and 3rd spot went to Chris Mills 1lb 7oz. The heaviest fish prize was won by James Everett with a 1lb sole. 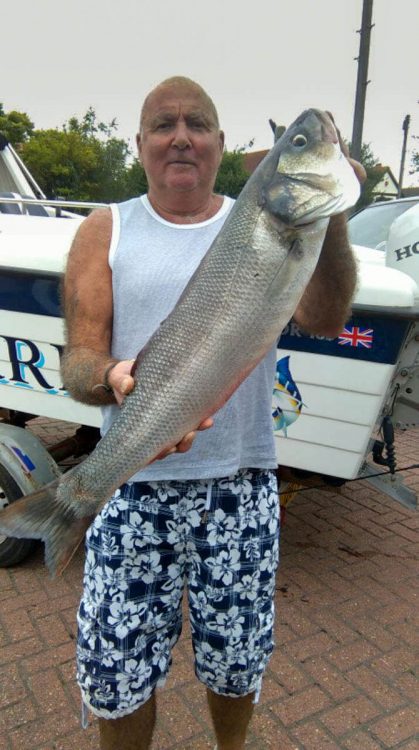 Colchester Sea Angling Club travelled to the Aldeburgh beaches for their match, and they fished an incoming tide. They also found that bites were slow, but they did catch small smoothhounds, bass, whiting, sole and dabs, plus an unusual catch of a tub gurnard. 1st place went to Mark Peters with 4lb 5oz, in 2nd Dave Clark 3lb 3oz and 3rd Mark Sessions 2lb 12oz. The heaviest fish prize was shared between Steve Yallop and Mark Peters with a 1lb sole.

The boats have also had a good week with bigger bass being caught, codling to 4lbs and still lots of bigger smoothhounds. The top catch of the week has to go to Dave Hollands, he fished with Ron Woolsley and launched from the Clacton Boat Club ramp. They had a great day with some large hounds and rays. Dave finished the session with a cracking 11lb bass caught on whole squid bait.

It looks like we are heading for a great September as long as the weather stays fair for the boats. The shore fisherman should see codling and whiting shoals building with dogfish also showing too.