Craig Mackay and Jerry Guy arrived at the northern mark just after 7am on Saturday 30th to find bit of a swell but manageable for landing skate, so out went the baits.

Fishing three rods, one with a smaller bait, the day was set to be a quiet one, that was until Michael Edwardson turned up after midday, when the craic upped a gear and left Jerry finding it difficult to get some shut eye.

With the swell growing mid-afternoon it was time to take in the skate baits as the lift was just too big to make landing safe. Instead we opted for some smaller baits to round the day off and sods law the first skate of the day picked up Craig’s 4/0 Manta Extra pennel rig with half a fillet of mackerel, something better suited to the wee fish. This was going to get interesting but fortunately the rig was clipped to one of the skate rods with 150lb rig body and 125lb snood length. 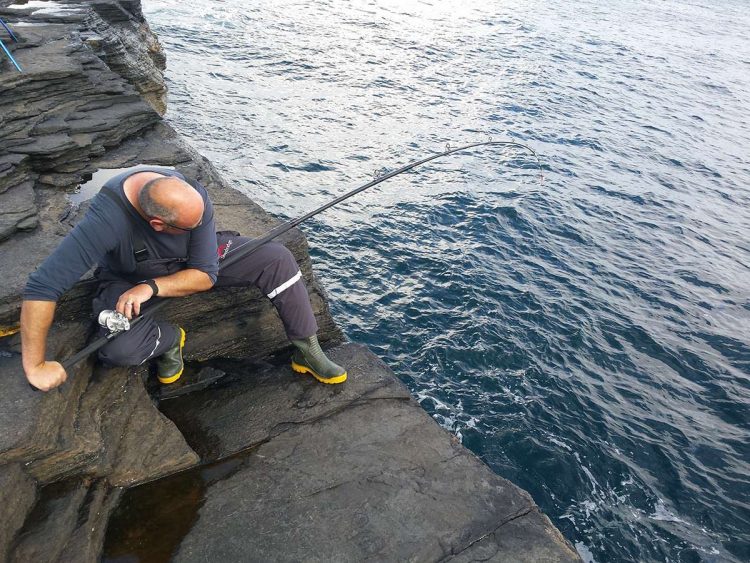 Craig set about raising the skate from the seabed spurred on by Michael and with Jerry shouting in the background “Is it no up yet?”

Progress halted as the skate became stuck, bit of time spent working left and right of it then she was off running again, coming up after a bit of a slog as the dropping swell assisted the skate to head downwards. After a while the fish was on the surface along with a clump weed and other detritus that it had picked up earlier.

Next step was to get her gaffed, not easy as the six foot swell made it hard to hit the spot and you do not want to miss the target. First attempt hit the mark but no sooner was it in, the swell lifted her and the gaff was out. Next try saw the hook length snap and she immediately headed back down into the depths.

To be honest how the 4/0 hooks stood up to the job of getting her to the surface beats me as they weren’t spared during the fight. So close but no cigar and we can say for sure that they are still around.