The codling seem to have moved in to the bay and around Rossall. Rossall Point seems to be the most productive at the moment with several codling being caught to 5lb. Fresh black worm is the top bait. Still the codling showing at 5-Bar Gate and Cleveleys.

If you have no success with the codling there are plenty of whiting, plaice, dabs and dogfish showing up along most of the coastline with the odd small turbot and sole mixed in. Overall best bait this week seems to be rag worm and it certainly picks the better fish out.

As the weather changes and the temperatures start to drop from the current mild spell we should start seeing a lot more codling. We have the winds we just need a bit of a frost to hold the dogfish off so we can get to bigger fish.

Darren Evans from Fylde Boat Angling Club hit the shore for a change and landed turbot from the Gynn Wall. 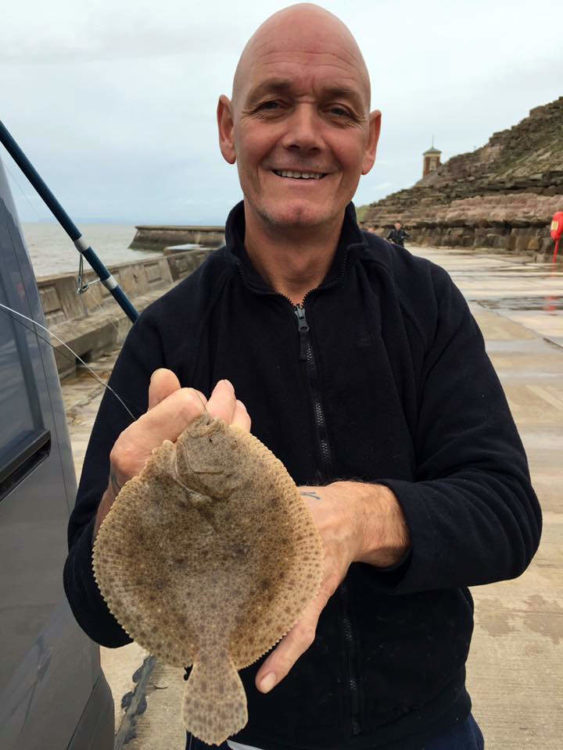 Darren Evans with his turbot

Last Sunday Fleetwood and District Angling Club fished a match between Beach Road and Dronsfield Road in Fleetwood. They enjoyed a good turnout with 26 members fishing the big tide.

The fishing was hard going, predominantly whiting but some flounders a plaice, dogfish, small smoothhound and a bass.

Just over half the anglers caught fish with black lugworm and sandeel the top baits. Top angler on the day was Craig Thompson who doubled most other catches. Craig had six whiting and a flounder for 64 points using mostly worm and sandeel. Runner-up Andy Whiteside had two fish for 38 points and Trevor Barnett in third landed four fish for 35 points.

Next weeks match is at Cleveleys and is the Blind Pairs event, the club will put some money into the prize fund.

Last Sunday morning on the beach to the right of the north pier Wayne Marshall and Steven Roe had a 2lb Bass each. They also had plaice, four dabs, two codling and two whiting while fishing low water from 06.30 to 09.30 hours with fresh black lug.

The next Bispham Angling Open match is on the 19th of November. For more details please contact the shop.

Neil Kenyon had a session on the Gynn Wall with his mates last weekend, fishing two hours up the tide and one down. Using fresh black and ragworm, they caught a few species including whiting, dabs, plaice, flounder and saw a small bass caught. 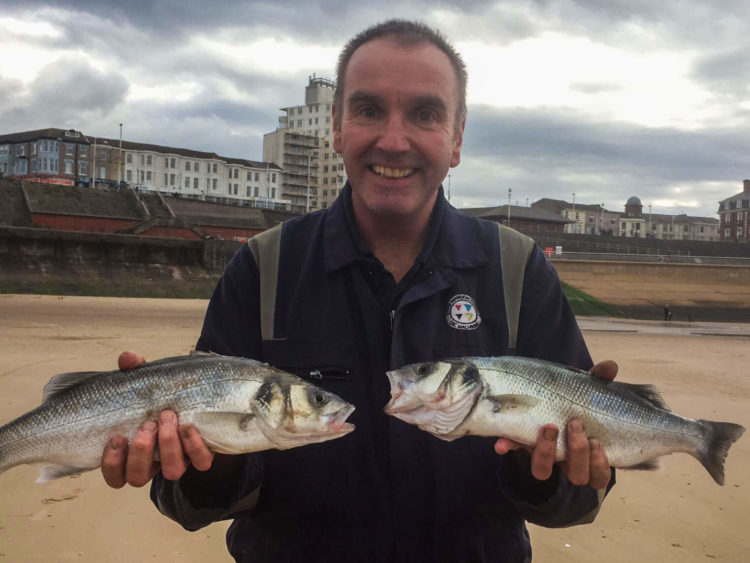 Wayne Marshall with a couple of bass

Last Monday Dave Brown fished Cleveleys where it was very calm and mild. Straight away the dogfish were on the baits. On the flood there was a mix of whiting including some decent ones. Dave also had a lone dab and lots of dogfish.

Jordan was at Rossall for a couple of hours last Sunday night over low water with Chris Ashton and Mark Thompson. There were plenty of fish including doggies, whiting, flounder, dab, plaice and a pouting for Chris. All fish where caught using black worm and ragworm fished on a 3/0 pulley pennel mainly fished close in.