The nights are now drawing in and whether we like it or not autumn is now upon us.

Another season opens up in the angler’s calendar and with it brings the bigger bass, whiting and codling, yes, I did say codling! Over the past few seasons we have struggled to see much sign of cod being caught and it still is early days, but so far a few fish, albeit quite small fish, have been reported. We are still a long way off those heady days of double figure cod being caught, but with fingers crossed our once staple North Sea fish could quite possibly be making a return.

Back to this week and bigger bass have moved in closer to our shores with one unconfirmed report of a 9lb bass from the Jaywick beaches.

My trip this week was to fish the Walton beaches with Colchester angler Joe McDonald on an evening tide for sole. It really turned into an anything goes session, although Joe did catch one sole around the 14oz mark.

Our top fish of the night was a 6lb 4oz bass caught by Joe while I was busy catching thornback ray to 7lbs on a two hook flapper rig baited with ragworm along with school bass, whiting, dogfish and eels all caught 30 yards out. 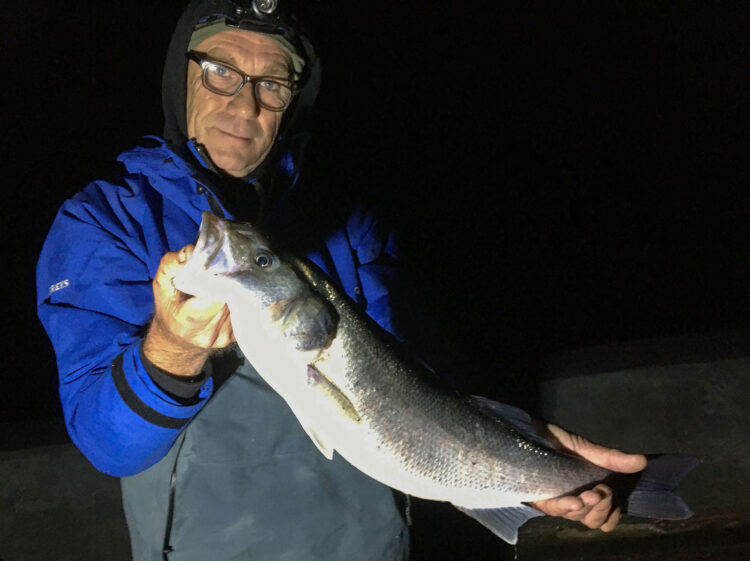 Colchester angler Joe Mcdonald fished a night tide on the Walton beaches in the hope of a sole or two instead, he landed this cracking bass weighing in at 6lb 4oz

The hard-fighting smooth hounds that were so prolific around Walton Pier now seem to have moved into deeper waters and we now may have to wait till next Summer to see their return.

Whiting are showing well from this local venue along with a few small codling, thornback ray and dogfish. Hopefully through September those mackerel shoals will reappear.

The Frinton beaches have been fairly quiet, but this is probably due to a lack of anglers fishing. Decent bass will be feeding here along with thornback ray and whiting. A big mackerel or squid bait will sort out the larger bass from the small ones.

Holland on Sea has seen the return of clumps of weed on the ebb tides, it does make fishing difficult but those anglers that have fished through it have seen some thornback ray and a few bass.

Clacton Pier has returned to form with thornback ray being caught on both day and night tides. It’s still worth using lures here for the bass where the ebb tides will fish the best.

The Jaywick beaches are fishing well for bass on lures, and the night tides are seeing whiting being caught along with the odd codling.

Rob Marshall fished the local pier for bass, he fished bluey baits under the pier and was rewarded with bass to 7lbs. 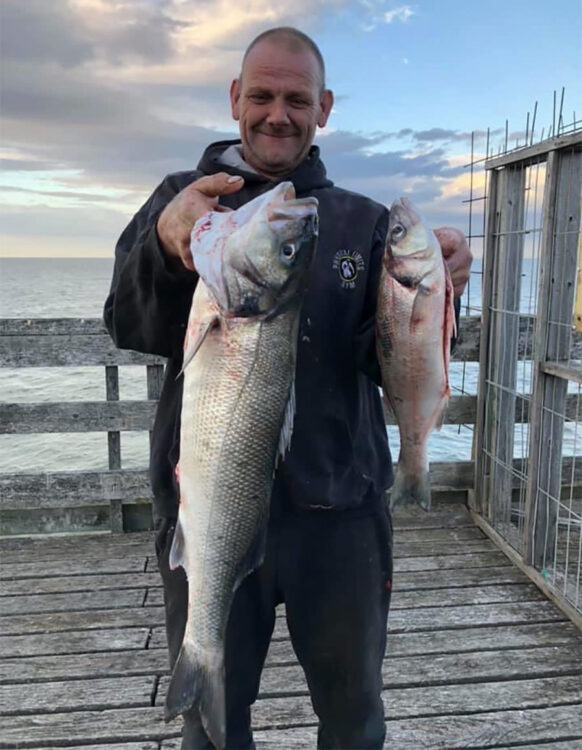 Rob Marshall fished Walton Pier and landed bass to 7lbs on bluey baits fished down along the pier piles.

Colchester Sea Angling Club fished their August league match on the Aldeburgh beaches. Fourteen anglers made the trip into Suffolk to fish an area called the “Shell” and with a north-westerly wind behind them it made for comfortable fishing. Plenty of Autumn whiting were caught along with a few bass, pouting, eels, sole, dogfish, small smoothhounds and the odd codling.

First place went to Lawrence Chisnall with an impressive weight of 14lbs 3oz, his catch included the heaviest round fish – a dogfish weighing in at 1lb 15oz. Second was Phil Buy 9lb 3oz and third Vic Pearce 5lb 4oz. The flatfish pool was won by Craig Wallace with a 12 oz sole.

If you have any local fishing reports you can contact me at popplewell1@btinternet.com