Another 200lb+ Common Skate Landed from the Shore

On one of their favourite north coast rock marks Craig MacKay and Sanders McPhee started lobbing their whole mackerel baited hooks in at 7am. With nothing more than frequent attacks on the bait by dogfish for six hours, things were looking bleak on the skate front. However things changed just before two o’clock as Sanders well and truly hooked into a big skate. The fish took off on a run against the drag but unfortunately his braid dug into itself and the line parted.

Within five minutes Craig’s rig was on the move as the skate headed perpendicular to the rocks before, probably due to the rip of a tide, it steadily moved left along the coast. After one of the shortest fights experienced she surfaced out from the landing point having kited up in the strong tide running. It was a simple task to bring her inshore under control of the rod the Sanders who was waiting with the gaff, 20 minutes from hook up to landing. In a twist to the story Sanders’ previously lost rig was hanging from the skate’s mouth. 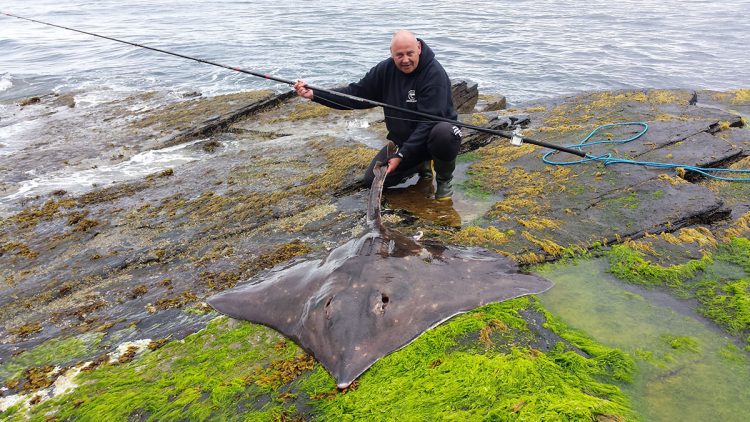 After a couple of photos she was returned to the sea, yet another north coast monster back to safety.