The weather over the Easter period has certainly been a godsend to many of us involved within the angling industry. Friends with boats, shops and a few in the wholesale trade have all reported brisk business, with many grateful for the fairly settled spell of calm seas and sunshine giving many the warm glow required to get 2009 off to a flier.

During the first few weeks of April we tend to see the fish starting to move inshore. This can range from more dogs, bigger huss and also some pollack and coalies. I’m glad to say that this year has followed the trend and that the catches are now on the increase with signs of summer in the wrasse caught over recent days – cuckoos, corkwings and ballans. Additionally this time of year we usually get a good influx of sizeable pollack , nothing of back breaking size, but drifting in 25 to 50 foot of water, close inshore, pollack to 6lb and averaging 2 to 3lb give a great account for themselves on light tackle. They’ve been feeding well over the last 2 weeks, with plenty coming to the boat with the odd double hook up on standard paternoster rigs. The bigger fish falling to those prepared to work baits or jellies on flying collar rigs.

As already mentioned the fishing has been gathering momentum with an almost daily basis, although the spurdogs are still eluding us in any numbers. The wrasse family on the other hand has been surprisingly obliging over the past fortnight. Usually they are a little hit and miss until we are well into May. The warmer calmer weather experienced over recent weeks has seen many ballans come to the side of the boat. Nothing monstrous but fish to 3lb on fairly light gear certainly put up a fight. 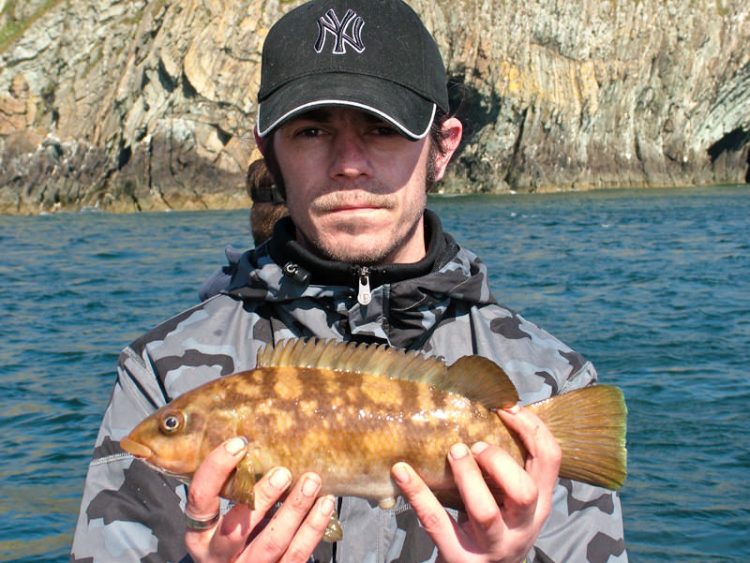 Rough ground marks out in the deeps have in general been slow, few huss, spurs and congers, but a boundless amount of doggies infuriating most anglers with the 180ft haul up from the sea bed. With nothing to lose, a change of tactics was required earlier this week and a search for new ground was thought fit – after all, with the elusiveness of double figure quarry in the deeps, there was nothing much to lose.

A good search through the charts and a series of 170ft rocks rising from 240ft seemed like a nice holding area for a variety of species. A few miles off my usual haunts it was going to be an interesting few hours afloat. Well, the move proved successful, no spurs sadly, but this mark produce more huss than dogfish with most specimens topping double figures with many around the 15lb mark, add these catches to 2 dropped tope, early season for us, so not geared for them. This is a mark that is without doubt going to be re-visited when tide and weather allows another offshore venture.