With wind, snow and freezing temperatures, topped off with a NE force 10 causing havoc in Holyhead, 2010 started in epic fashion, with little chance of indulging in our sport of catching monsters of the deeps! My Way came out of the Water mid January until the start of March, for some much needed TLC following a hectic 2009.

Launching early March our fishing adventures could be best described as inconsistant. Many days would see reasonable numbers of fish come aboard and the next proving a struggle – double figure fish of any species proved elusive. However with a better outlook for the month to come, hopes were high.

Fortunately April saw the change in our weather fortunes as more settled weather and high pressure spells nestled over the UK and treated us all to calmer seas.

This time of year we tend to go on the look out for big bull huss, spring spurdog and if lucky one or two small tope that often run with the spurdog packs. 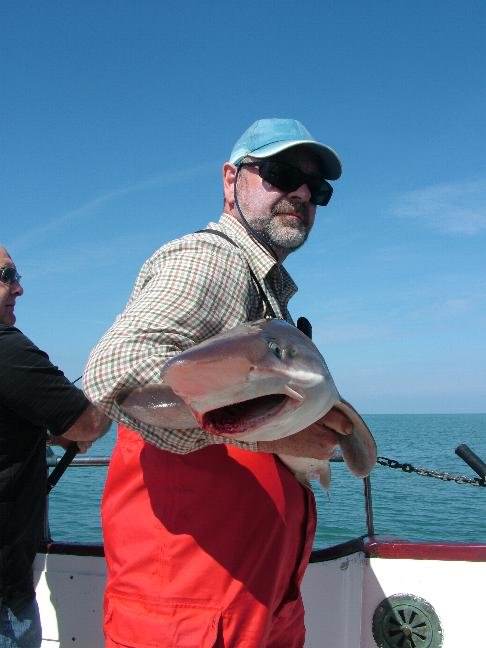 Northern marks at the edge of Holyhead Deeps were not to let us down as our first jolly early April returned numerous double figure huss and spurdog to 15lb. Sadly no tope on this day, but being a good six weeks before our main run normally starts things were looking up. Approaching North stack on one outing, we noticed some dolphins breaking the surface. Deciding to take a slight detour we steamed over to have a look and were rewarded with over half an hours excitement watching a pod of over hundred bottle nosed dolphins frolicking and feeding in the spring sunshine.

The following day a slight change of mark, gave us the huss, spurdog and this time the tope we had hoped for, weighing in at 22lb and 23lb for Milnrow Sea Anglers Ken and Dennis. During the trip twelve separate species were brought aboard My Way including pollack, coalie, ballan, cuckoo, a good start to our 2010 adventures.

Barring a few trips when the wind gods wanted to dampen our ever increasing enthusiasm for the 2010 season April continued with a steady stream of big huss, spurdog and 20lb+ tope. Inshore the drifting has improved almost daily with better pollack and coalies moving in to populate the rocks and ledges surrounding Holyhead bay. The wrasse are still playing hard to get, but some nice ballans and cuckoos have started to make an appearance on this year’s guest list.

When the weather has prevented us from travelling offshore there have been plenty of fish over the soft and hard marks in the bay in the form of dogfish, whiting, small codling, dabs, small huss and a few thornbacks. A recent trip inshore produced a blonde ray of 15lb together with several decent huss. Nothing to rattle IGFA world record list, but battled on light tackle followed by a sausage buttie and cup of tea, always makes for a fun filled trip.

With our new Lowrance HDS 8 Structure Scan unit due for installation in the next couple weeks, things are looking exciting for the year ahead. Check out the video here for more information. As we utilise the many benefits of Structure Scan, we’ll be adding a ‘Lowrance Blog’ to the website full of information and screen shots from our fishing adventures throughout 2010.