Allan Has A Tope Time Out Of Fleetwood

Fleetwood and District Club were out at Cleveleys fishing over low water. The weather put a lot of anglers off attending, but despite a strong west south west wind the sea conditions were not to bad. Unfortunately the fishing was poor with only three fish caught. Alex Garden won with a 48cm eel for 15 points followed by Dave Wilson with a 13 point plaice and finally Hughie Porter with a sole for 2 points. Next Sunday the Club will be fishing the same beach but at high water.

Pier member Anthony Gouldthorpe was fishing the pier and landed a conger which, surprisingly picked up his fresh black lug bait. 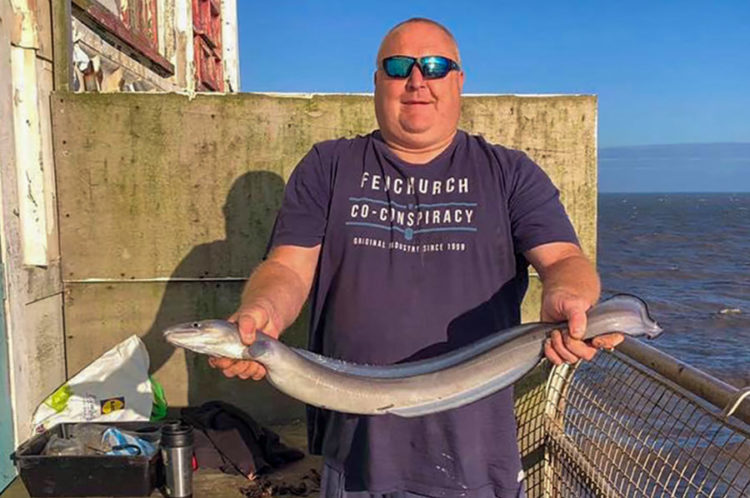 Anthony Gouldthorpe with his conger

Allan Cordell headed out for a session aboard the Kingfisher which was kindly organised by Paul Fulcher.

Allan had not done a great deal of boat fishing but fancied another go with a decent tope as a target. It was an 11:15hrs sailing and he left a tropical Manchester at 08:00 and picked up fresh bait from Jordan Russell around 09:30. A full breakfast in the cafe opposite and I made my way to Fleetwood in time to have a coffee and ice cream.

Allan met up with the party on the esplanade and the boat arrived spot on time. The boat soon had us on our first mark and lads on the opposite side nailed a few smoothhounds fairly quickly. Alan started with with crab but nothing was happening so he switched to fish and squid wraps which resulted in numerous bright orange star fish and an occasional dogfish.

At the next mark he returned to crab and soon had a couple of hounds under his belt. The dogfish were of plague proportions on all baits but their feeding spree eventually ceased as the tide hit high water. Allan decided to go all out for a big kipper and switched the rod to a running ledger 7oz uptide lead, three feet of 100lb wire and a 10/0 Cox and Rawle Meat hook. 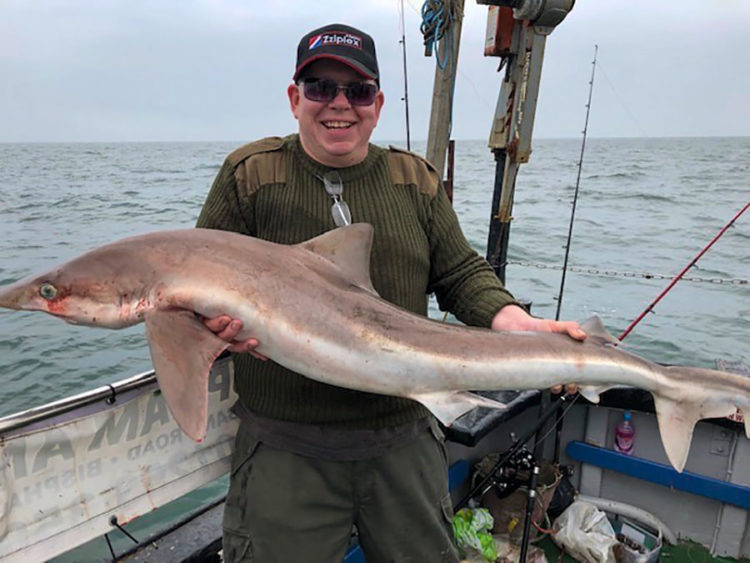 Allan with his big tope

This presented a full mackerel hard on the bottom with the intention of maximising bite indication via the 30 lb braid mainline. Lots of knocks and pulls resulted in the bait being whittled back to the head and further baits were regularly changed interspaced with the occasional greedy dogfish that managed to gorge themselves on the bait remnants.

An hour into high and the rod pulled down and stayed under pressure, followed by a series of increasing pulls which he gave a little line to on the ratchet resulting in a solid arch on the rod. With the reel engaged he bent into a solid fish which then decided it wasn’t staying in the vicinity of the boat.

Allan managed to turn the fish which then ran straight at the boat and he thought the fish was lost. However, he re-engaged with the fish and it went directly under the boat stripping line and the rod arched over as the fish picked up other lines during its struggles.

After a few runs the fish came up to the surface and the first glimpse was off a dogfish which confused him, but it was attached to another line involved in a tangle. Subsequently, the tope was visible and clearly a good fish.

It was eventually expertly netted by David Playforth and after a wrestling match was successfully weighed in at 33lb using one of the party members digital scales. The fish was returned after photos followed by a new rig and bait being cast out. Only action was two more dogfish but Allan was more than satisfied at with achieving his target fish and beating his previous personal best tope by 25lb. Thanks go to Paul Fulcher for organising the trip, Dave Playforth for the netting, Kingfisher skipper for putting us on the fish and to the lads in the party who helped with unhooking and photos.

The Bream Are In! Fishing for Bass and Gilthead Bream