The latest Skegness Pier Angling Club (SPAC) open match was held yesterday, Sunday 30th June from Marsh Yard (Moggs Eye), north of Anderby Creek. There had been reports filtering through on the day of big smoothhounds being caught every cast from low tide at North Shore Road, so expectations were high amongst the excellent turnout of 19 anglers.

Conditions were absolutely perfect for hounds, with bright sunshine, flat calm, coloured sea and a gentle offshore breeze to help with the casting.

Due to the presence of a large amount of holidaymakers already on the beach, it was decided to allow anglers to drive down to the southern beach access, which the majority chose to do, whilst a few chose to remain at the northern end of the venue. 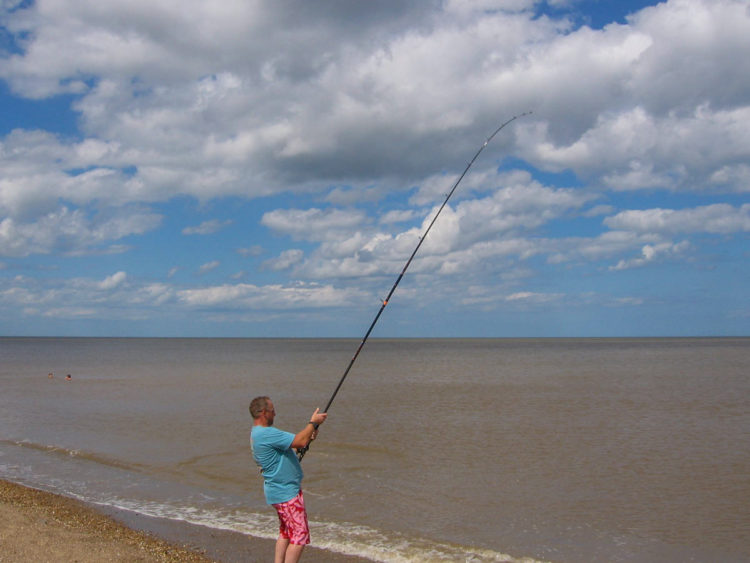 After a couple of difficult matches, with relatively low catches, we were due a good match and what happened next exceeded all expectations. Hound magnet Adie Cooper was soon into his stride with a strong bite first cast, resulting in a hard fighting fish on the end. Adie skilfully brought a cracker of a female hound ashore, which hit the measure at 109cm and was weighed in my carp sling at 12lb 5oz. Fishing next to Adie, Grimsby ace Dan Jackson was also into fish from the off and the two long distance casters had a ding dong battle throughout the match.

Match organiser Chas Tibble was late getting onto the beach due to booking latecomers in and his first cast with lugworm on a three hook flapper resulted in nothing. But then he managed to get some crab peeled and his next five casts resulted in five decent smoothies. All the way along the beach, hounds were being brought ashore thick and fast, with Grimsby anglers Paul Denholm and Ian Nelson matching each other fish for fish. Youngsters Josh Collier and Dylan Morgan were also catching well, whilst top Grimsby angler Karl Nangle was going quietly about his business further south, pulling out hound after hound. 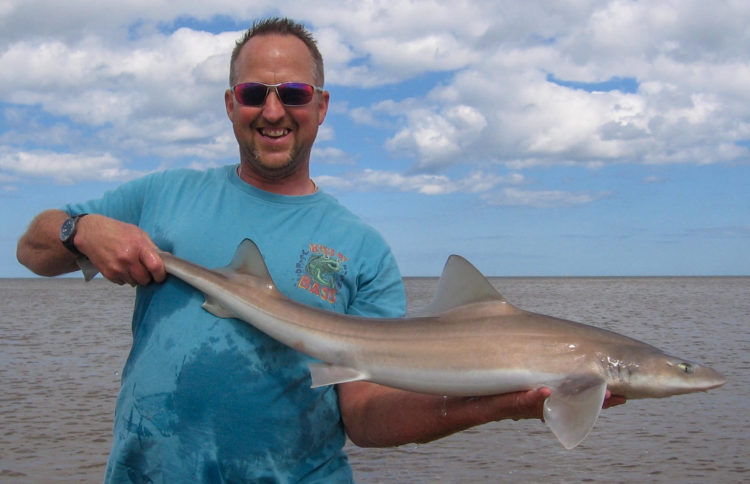 This was what was on the end a superb 109cm female smoothhound, which weighed in at 12lb 5oz and took the longest round fish prize

In straight measure matches when hounds are about, its normally a waste of time fishing close in for flatties. But most of the smoothhounds were coming to the longer casters, so Gordon Nelson and “angler not a dangler” Bob Foster plugged away at their normal close range, to get a few flatties on their score cards. But on the outgoing tide, everything changed, with Gordon catching his very first hound on a three hook flapper. Amazingly, his next cast with the same rig resulted in a hound double shot! Bob didn’t have any crab, so I gave him a chunk and he sadly went on to miss two hound bites at very close range, proving that the hounds were feeding all over.

Kind hearted Russ Taylor fishing next to me, was taking “catch and release” to a whole new level, losing fish at the waters edge, to save them being brought ashore and measured! One or two others were also losing fish, with Dave Burr dropping both a decent bass and a hound after they had hit the beach. 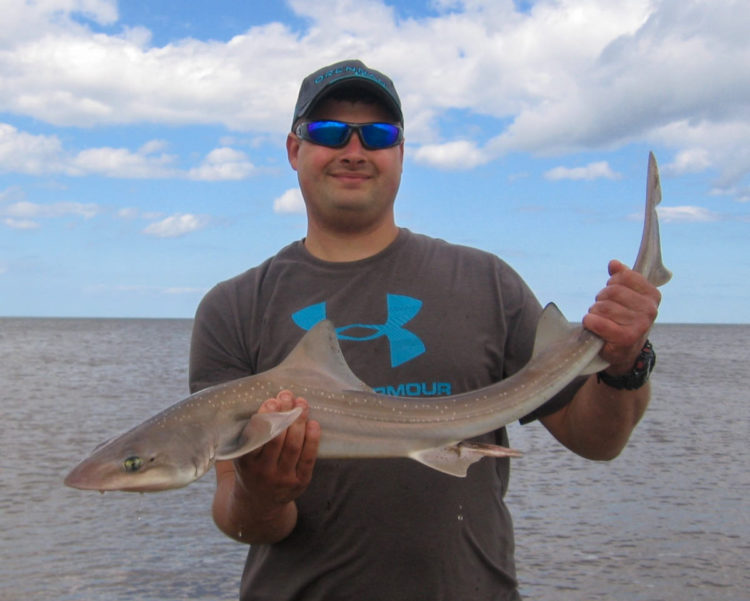 But in the end it was long casters Adie and Dan who caught the lions share, with Adie running out winner of the Sheffield Cup with an amazing 16 hounds for a total length of 1301cm. Dan’s smoothies were of smaller average size and he came in second, also with 16 hounds for 1161cm. Karl Nangle also cleared 10m, ending up in third place with 14 hounds measuring 1026cm. Both ends of the venue fished consistently well, with Dave Burr at the north end also in the money, taking fourth place with 961cm.

The longest round fish prize went to Adie’s superb 109cm first cast smoothhound, which also wins SPAC Fish of the Month for June. In all, there were five hounds caught of over a metre in length, all of which would have weighed into double figures. The last remaining prize was for the longest flatfish, with the money going to Ian Nelson for a 32cm flounder. 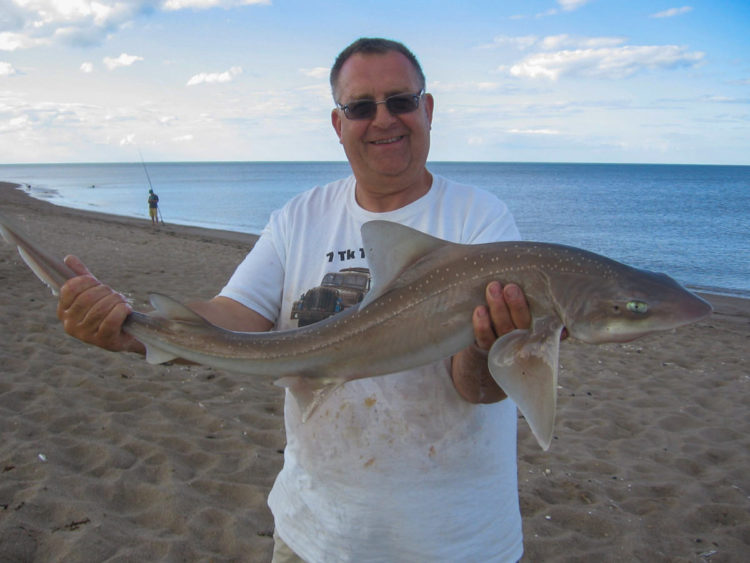 Russ Taylor decided not to let this one go prematurely at the waters edge! This cracker was just over the metre mark and was really strong, taking a bit of measuring!

So a vast improvement over the last few matches, with 145 fish caught, consisting of 134 hounds, nine flounders, one dab and a lesser spotted dogfish, the vast majority of which were returned to the sea alive.

A big thank you goes to everyone who turned up and contributed to such a fantastic match, certainly up amongst there as one of the best SPAC matches I have been involved in!

Hopefully the hounds will still be there for the next SPAC match, which will be held this coming Saturday 6th July from 2:30 till 6:30pm at North Shore Road, with Club members fishing for the Shipstone Cup. Please note that this is a low water match and is open to all to fish. 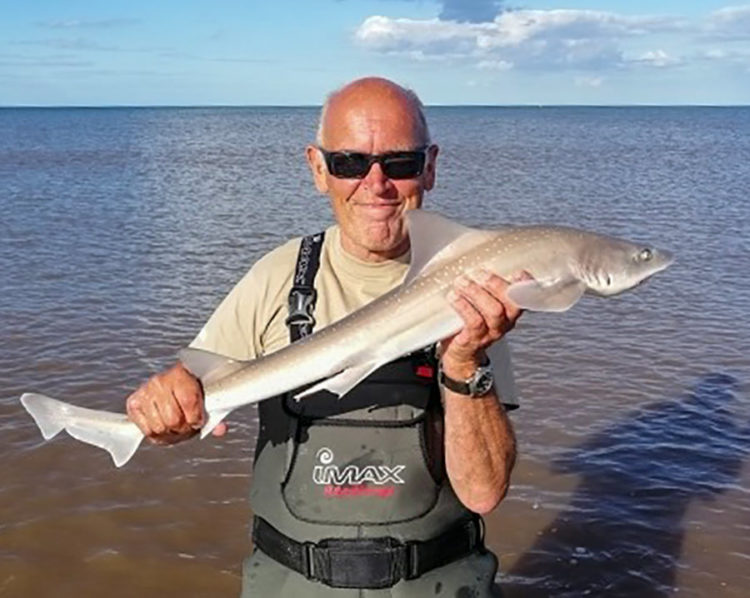 Sixth placed Chas Tibble with guess what – another hound!

Just a quick reminder that under SPAC rules, all hounds must be measured, recorded and released before the next cast is made. Also, every angler must be in possession of a large bucket or similar container, to retain fish in before registering and returning. Please pass on to those not on Facebook and please contact SPAC Secretary Chas Tibble on 07984 967988 or chastibble@hotmail.com for further details.

Allan Has A Tope Time Out Of Fleetwood