Just when the Bank Holiday weekend arrives so did Storm Katie; and with her brought 60 miles an hour winds and driving rain. So it was time to batten down the hatches for the boats and wait for calmer weather. Luckily during the week, we did have calmer seas and the Clacton Boat Club took full advantage and two members, Barrie Sage and John Cook landed seven thornback rays to 8lbs plus some codling, dogfish and whiting. 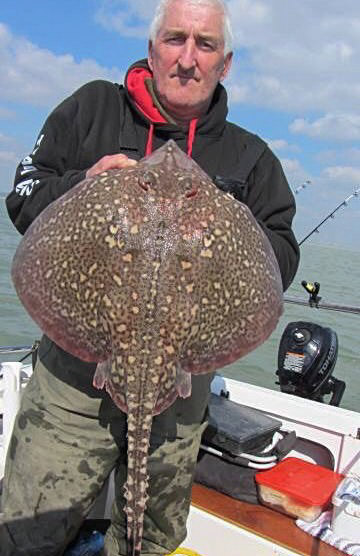 Ron Woolsey also a Clacton Boat Club member had a good day and ended up with a fine thornback ray weighing in at 14lbs.

In general, this week both charter and private boats have had productive outings, with those sprat and herring shoals disappearing very quickly. We are also in that turn around period when the Spring / Summer species are moving closer to our shoreline.

The codling that have been so elusive since the end of last year are now starting to be caught, still not in great numbers, but well worth fishing for with fish in the 6lb range being caught.

The school bass are also increasing in numbers with the odd bigger fish among them, but don’t forget there is a restriction on keeping these fish. From January 1st 2016 to June 30th it is catch and release only and from July 1st to December 31st 2016 it is one bass to keep per fisherman per day. Hopefully by next year those governing bodies will be able to delineate between commercial and recreational fisheries and give our recreational fisherman a better crack of the whip.

Clacton Pier has turned into summer mode with both rays and small bass now being caught plus dogfish and plenty of small whiting are still showing. Chris Hayes fished the pier on a day time tide and reported that the fish were feeding. His top catch of the day was a 6lb 9oz thornback ray caught on squid bait fished on a pennel rig, and Chris also told me that whiting were also feeding well.

The St Osyth beaches are always a safe bet as a Spring venue and true to form it has once again turned up the goods with still lots of rays being caught here and now a few bass showing. A top tip here for catching the rays is to fish the last three hours of the ebb tide and this will increase your chances tenfold. Top bait for the rays has to be calamari squid.

The Clacton and Holland beaches are once again on the slow side, with the night tides proving better with the odd ray being taken, but on the whole it is mostly small fish being caught. Walton Pier has seen a few codling this week mostly in rougher seas but the top of the pier is the place to be for those thornback rays and dogfish. Anglers on the Walton beaches are still catching whiting and a few flounders in calmer conditions, but it will still be a few weeks before the bass arrive in any numbers.

The high tides for the weekend are Saturday 7.10am and Sunday 8.43am.

Lure Colors Pt 4: Choosing Lures For Use In Dirty Water