The east coast is warming up quite nicely on the angling front, with some epic catches of rays from the piers and beaches. If I could just take you back just a matter of a few years ago catching a thornback ray from the piers or beaches would have been something to talk about but something seems to have happened in the depths of our ocean that has changed things dramatically.

Yes, it’s great to be catching these rod bending rays but we seem to have an imbalance in our waters where these fish have taken over the seabed and seem to have pushed out other native species that are all fighting on the same food chain.

Our spring codling run didn’t materialise as they disappeared with the sprat and herring shoals because that is what they were feeding on and with those rays eating everything else on the seabed there was nothing for the codling to feed on. 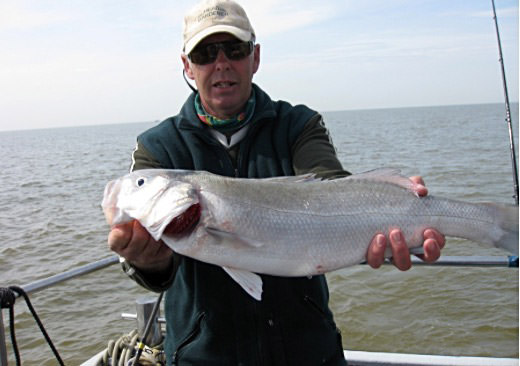 Walton Pier has had a great week on the thornback ray front with most anglers once again catching them. Small bass are showing well, especially from the lower part of the pier where ragworm seems to be the favourite bait.

My trip this week was to the local pier. I fished towards the lifeboat area and had a great day catching small bass and that summer species the garfish. These fish look like a mini sword fish and are great fun on a light fishing rod. Also during our mini heatwave we saw some mackerel being caught from the pier which is something that we don’t see very often.

The Walton beaches are also fishing quite well, but you will have to down size end tackle, however, there are lots of school bass, soles, flounders and some eels to be caught. Top venues will be the coastguard beaches to the north of the town and burnt house towards Frinton.

Most of the Frinton beaches are showing small bass and soles, but beware the dreaded “mayweed” has started. This natural phenomenon appears in the month of May and is caused by prolonged sunlight on the sea which in turn causes an algae bloom that attaches to the angler’s lines and can cause all sorts of problems with keeping baits on the seabed and with reeling in. It will only last a couple of weeks and the ebb tides will always be the worst to fish.

The Holland beaches seem to be quiet, but that is because of lack of anglers, and those that have fished have seen some bigger bass to 3lbs being caught as well as rays to low double figures.

Clacton Pier has been fairly quiet during daylight hours with the odd ray, whiting and small bass, but after dark this is the venue to fish with some bigger thornback rays showing and lots of dogfish.

The boats this week have had a reasonable week, although they are also suffering with our influx of “mayweed”, but bass have been caught to around the 8lb mark along with a few bigger smooth-hounds and of course thornback rays!

The Sophie Lea managed to catch more than their fair share of bass with Phil Chapman landing one of 7lbs and another 5 were caught on the boat, with Phil Reymont losing an even bigger bass at the side of the boat!

The high tides for the weekend are Saturday 12.27am and Sunday 12.55am