The New Year, in angling terms, has come in better than it left us. The end of 2015 saw us struggling to find any cod at all, with the fish being pre-occupied feeding on those massive shoals of sprats and herrings. Well something seems to have happened virtually overnight and we are now seeing a bigger stamp of codling being caught, so it looks like the bait fish maybe thinning out somewhat.

Once again the boats are still struggling to find any respite from those prevailing winter storms that have been hitting our coast. On those odd calmer days the Gunfleet Sands has fished reasonably well with cod to 9lbs and thornback rays to 10lbs, plus dogfish and lots of whiting.

Walton Sea Angling Club held their Annual Boxing Day Fishing Match on the local pier. It is always well attended and this year was no exception, with 65 competitors turning out. Conditions were good with a warm but strong wind, and from the off the whiting were showing well, plus dabs, pouting and rockling and most anglers caught fish. First place went to Richard Burt with 2lb 1oz, second spot went to Rob Tuck 1lb 12½oz with Mark Peters third on 1lb 10.5oz, Vic Pearce fourth with 1lb 10oz and in fifth Ricky Farrance with 1½lb.

Reports from both Walton and Clacton Pier and beaches have been much better this week. My trip this week was to Walton Pier for a late afternoon cod trip, and once again I was faced with a south easterly gale blowing, so I headed for the stem of the pier as this always fishes better for the cod. Unfortunately I didn’t find any, but I did land a thornback ray weighing in at around the 7lb mark, the fish took a whole squid bait. These rays should have headed for deeper water months ago, but because of a combination of unusually warm water and cuts in fishing quotas, it looks like they will be with us all year round. 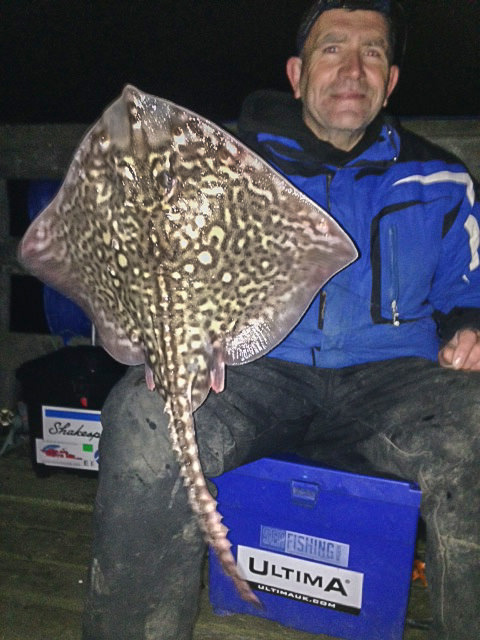 Other anglers fishing Walton Pier have reported cod to 9lbs, plus the odd ray and still lots of whiting to be caught. The Walton beaches are now showing a few cod plus whiting and a few dogfish after dark. Top venues to try are the Coast Guard beaches to the north and Burnt House to the south of Walton.

Reports from the Frinton beaches have been sketchy, but there has been a lack of anglers here, but they will be producing codling and whiting. The Holland and Clacton beaches have picked up this week, although venturing out in these on-shore gales has made things uncomfortable. Codling to 5lbs have been caught plus the odd small ray and dogfish. Clacton Pier has seen an upsurge in thornback rays and some codling, with most of the rays being caught on the night tides.

Summing up this first week of the New Year, the fishing has certainly improved but by no means will every angler be catching cod, although there are certainly enough there to get down on the beach or pier. It looks like it’s only a matter of time before someone lands a double figure cod!

If you have any fishing reports you can send them to popplewell1@btinternet.com