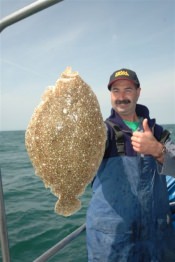 It has been a good start to the flattie season with reasonable numbers of turbot and a few brill. The brill tend to show better later in the season but at the moment it feels as if fish are feeding as we would normally expect them to which is making amends for a poor turbot run last year. Boats have been getting up towards 40 a day at best but even in unfavourable conditions boats have had somewhere between 7 and 10 per day.

Two of the best fish so far have fallen to our local boat Smuggler of Alderney skippered by Colin Dukes in recent weeks. Just yesterday a 20lb 4oz fish was caught by local angler Matthew Cosheril in amongst a catch of 12 for the boat in an unsavoury easterly force 4 to 6, not ideal! Mathew does the odd boat trip now again so to catch this fish on a day when the local ‘regulars’ were out must have been something special.

Bristol angler Steve Churchill who has been coming to Alderney for the last 8 years caught a fish of a lifetime aboard Colin’s boat. Steve’s trip nearly went sour when his father in law fell ill the day before the trip started and couldn’t make it. Graham insisted that Steve should carry on regardless and although Steve did manage to find a few fish it wasn’t spectacular stuff for him…………………until the last drift of the four day trip! He had the tell tale signs of a turbot bite, plenty of slack given before he leant in to a solid weight. A far better fish he knew but it wasn’t till Colin slid the net under that they realised just how good a fish it was. A massive 25lb 12oz!

Colin has been busy of the boat too; he has just received his Daiwa sponsorship tackle deal. The boat is now fully kitted out with the whole range of Daiwa Kenzaki’s, Daiwa Saltists level wind reels, accu depth braid and a whole host of tackle goodies for his customers to try out.

As I mentioned before one or two brill too, best fish reported 9lb. Bass have just started to show as well with fish to 6lb caught on live eel. Numbers will increase radically during the rest of May. The tope fishing is nothing short of fantastic with fish to 49lb reported. Once the packs located it is not rare to see all rods leaning in to fish which is spectacular to see. I have had reports of rods snapping, rods/reels lost over board and all sorts such is the frenetic action these mini sharks provide. One of the guys even had a go with an ice fishing rod!

Last year we experienced some good bull huss fishing which looks set to continue with what is being caught, quite a lot of fish in to double figures which is good news. Nothing much else to report inshore, not that we’d know any different because really it is turbot time and nothing else matters to the anglers that visit.

On the wrecks there seems to be plenty of pollack, best fish reported was one of 21lb caught in a Weymouth boat. A smattering of cod caught too, very early but very welcome. Hopefully anglers will have the ability to return what they can rather than antagonise the commercial sector of what they are catching. Keep what you need not what you want, they go back alive very well unlike pollack. Many cases last year anglers did not portray themselves as being that interested in conservation as often as the case is tried to put across as regards ‘we only keep for the pot’. Best cod reported so far is 25lb.

Shore sport………..not great, but also not a lot of fishing taking place. I think sometimes it takes a few good news pieces to get the anglers out and of course some warmer weather maybe! Garfish, pollack, mackerel are all there but it is slow. Bass have been caught on worm baits, one session for Wally Walters resulted in a dozen fish between 1-3lb. The pluggers report very little activity. Some good wrasse fishing being experienced with fish to 6lb. Last weekend there was a coupe of decent sized plaice from the Breakwater, fairly unusual to see plaice here let alone two………the bait? Lazylug! I’ve not known a rod go out after dark last month but I am sure there will be some huss around simply due to the numbers around.

Our annual sea angling festival takes place in October. This years dates are 17th till 25th. Last year fishing for some species was a little slow but normally there are some cracking specimens caught and if you are a novice to Alderney it is a great way to get to know the place. If you need more info don’t hesitate to ring us on 01481 824884. I can give you travel, accommodation and competition details.