I love this time of year as it marks the arrival of many different species. The diversity is immense whether you fish from the boat or from the shore but as always it is the pride of the southern flatfish, the turbot, which takes centre stage. It’s one of the main reasons that the island is visited by many anglers from the UK and Europe. After a leaner couple of years the big flatties have appeared in good numbers and over a longer period. For a second time this year they have turned up in droves with good catches reported from the charter boats. Silver Spray skippered by Sam Cumming managed to find a cracker of 23lb which is the best reported during from June. The same day the Alderney boat record for an angler fish was broken when one of 17lb was boated, fabulous fish.

Brill have increased in numbers throughout the month with better fish now showing, some close to the magical double figures. Bass have been slow to appear again this year but much better than last when we barely saw a fish mid-July. As with last year there are more fish in and around the rocky outcrops instead of shoaling on the offshore banks during the warmer months. The charter vessels can’t get around the rocks so need to be content with the offshore fishing but the bass are being taken by the small boat anglers.

Tope have left the more popular marks and now running around packed up, some days you hit them and other days you don’t. They’ll settle again soon on the more familiar marks. Huss and conger will also be taken on the same ground. Now, some of you are species freaks so if I mention tub gurnards it may not make you quiver with emotion. If I mention fish to 8lb it’s a different story! Lee Le Poidevin landed the monster which easily beats the 6lb plus fish reported last month; thanks to Fishing Guernsey for the photo. Species hunters will also find weavers on the same ground so watch out for the spiny brutes. 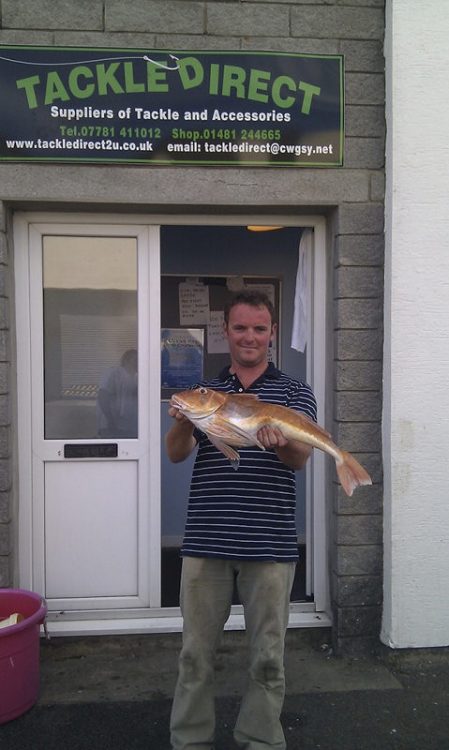 While not normally targeted just now blonde rays to 25lb have been caught on the smaller tides when dragging a bait for turbot. There are also the odd smoothound, couches sea bream, black bream, and cuckoo wrasse amongst the more popular ballans, pollack and gars to be caught. It’s alive with a variety of species out there at the moment and I’m sure there is something I have failed to mention!

Shore sport has vastly improved during past few weeks with good reports of mackerel to 2lb, yes 2lb on spinners. Up to thirty bass have been caught on lures in a single session, phenomenal fishing and maybe we did have a few days where we were lucky with an influx of fish but who’s complaining! Fly fishing for bass is increasingly popular and Matthew Crampton from London had fish on a fly everyday during his week long visit. Most of the fish he caught were small schoolies but he did manage three good sized fish with the best just on 4lb.

Gars to 2lb also reported together with pollack hitting the 6lb mark. Again a variety of species are available at the moment although not as prolific as from the boat. Tope to 30lb caught from the bays and conger are a regular catch from the Breakwater. Dogfish plentiful on some marks, a bit of a pain when you are after some of the more favoured species but welcome none the less if things are quiet. Triggers are being caught from the Breakwater and the first of the black bream are appearing inshore as well.

There have been plenty of hot, balmy days to get the kayak out. Wrasse to 6lb are easily targeted around the kelp and rocks, pollack to 6lb as well falling to spun lures. Bass to 5lb have also been taken on plugs. I focussed on catching a turbot from the ‘yak last month, so this month the focus was a decent blonde ray. I failed, but not miserably as I managed two more turbot!! This highlights the fact there are plenty of the tasty flats here around the island. They were fluked ray fishing and I have also had half a dozen on the boat when we have been bassing with live eels and long traces. Back to the kayak, immense fun especially on the lures for the species previously mentioned. I will though keep focussed on the ray but also be hoping for a tope or two.

Looking ahead to next month it will only improve for every single species except the flatfish. Maybe we’ll see a few more brill but probably less turbot as the species fade away for the year. Bassing will be fantastic in the boat on the spring tides. Shore sport will see good numbers of black bream on the float, more mullet and for ground species we will see sole and red mullet making an appearance to join those species already here.

With regards to the inshore fishery and conservation measures a constructive, open meeting was held last month. Held strictly through the chair to avoid any outbursts and intimidation opinions were raised and topics were discussed for the States to take on board and analyse. Subsequent meetings have taken place since and now we are at the stage where the States are taking on board expert opinions as regards the cycles and spawning stages of the fish around Alderney. It is a slow process but things are moving along in a positive way. Keep watching this space or my website in the Latest Reports section.

As usual I wish to thank all those of you that do come and plough your money in to the islands fragile economy. I trust you are one of the ones that go home with the fishing experience you’ll remember for weeks and months to come, or at least till your next visit!