December is one of the best months of the year for shore angling in Alderney. Plenty of species around to target but the quantities are spasmodic at the moment. Weather is putting pay to any real efforts being made but one or two hardy souls have managed to put some decent sessions in and getting fair reward for those efforts. Certainly having quality bait makes a huge difference and also not skimping on the quantity means that you overcome any shortfalls in the fishing. No good having a shoal of fish in front of you and not being able to catch because you don’t have ample bait supplies. 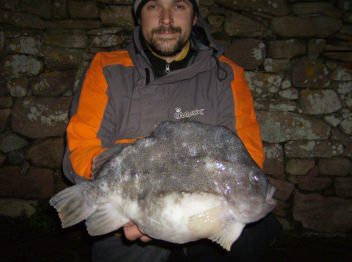 Table eating fish are generally what anglers like to target and there has been a good run of sole here with most fish caught over 2lb. Lugworm is by far the best bait with venues easy to get too, no cliff climbs necessary for these, just walk on the beach and away you go. Ragworm is a close second for bait for these oval flatties. While waiting for the sole you should be kept busy with school bass and half a dozen fish likely in a session. Normal sizes are 1lb to 3lb but if you are there on a night when a shoal of larger fish comes in past the island all hell can break loose. It’s not unusual to catch fish in the 4lb to 7lb range in ideal conditions. Red mullet, the numbers of which peak in January, will also take worm baits and are a tasty addition to the table. We’ve seen fish to nearly 3lb with most of those landed being in the 1lb to 1½lb range. We’ll see less of the biggies and more of the smaller fish as the month progresses. Black bream will also figure in the catches as will Couches and gilthead varieties together with codling and pout. We’ve not done too well on the bigger black bream this year, we had a good run in October on the first set of Spring tides but since then the fish have been around 1lb to 2lb. Last week a group of anglers on the Breakwater encountered some fish in the 2lb to 2¾lb bracket but most fish have been smaller of late.

Occasionally a lumpsucker will show up around our shores and Nigel Bowditch spotted one cruising around as he fished the quay recently. The fish a couple of lures retrieved past it, but a switch to worm on a leadhead saw Nigel nail it. Alderney’s fish recorder Dick Smith was on the scene and on his scales the lumpsucker weighed 5lb 14oz, a new Alderney record and the fish was safely returned after a quick photograph.

On the quay there we get a variety of species taking refuge from the strong tides around the harbour area. At this time of year there is a good run of squid which is precisely what the boys were targeting the lumpsucker appeared. They’ve been catching squid to 3lb 8oz this month, great eating and excellent locally for bait.

Shore based specimen fish hunting is not particularly high on anyone’s agenda on the island which is a pity as several species are well worth the effort of hunting out the specimens. Bull huss in particular are around in good sizes and a concerted effort could see the British record falling from the Island’s shores. Conger are also worth targeting as accidental catches of fish in the mid-twenties are common. Tope and rays including small eyed, blondes and undulates also venture well within casting range for the dedicated shore angler.

Boat fishing is non existent this time of year. Normally I am the only one out there taking advantage of the fantastic fishing available but I have just sold the boat so I’m in limbo with that whilst I source another. That probably won’t arrive till next spring. However the kayak is a brilliant alternative option. At the moment ‘yakkers tend to concentrate on the fishing and had good sessions around the rocks plugging for Bass. Other surprises do turn up like big ballans and the odd garfish but more commonly pollack will grad the lures. Dick Smith captured and excellent specimen of 11lb 14oz last weekend while fishing with soft plastic lures.

Fieona and I managed a break last month and we headed up to Scotland where we enjoyed some great sport with Ronnie Campbell in the Oban area including some massive common skate.

The consultation process for our inshore fisheries is nearing a conclusion. At the time of writing we were just a week away from seeing the green paper containing the proposals for our inshore waters so for an update go to the latest reports page on my website www.alderneyangling.com. Many thanks for your continued support on this, crossing our fingers here that we do get better protection, particularly from the inshore netting.

In the meantime many of you continue to visit the island to sample the delights of our angling, your visits are most welcomed and enjoyed, and the difference to tourism is huge. Much appreciated. It’s the end of year now to and as I mentioned earlier this is my 7th year here. It’s been a success both on a business sense and personally. I like to thank you all for making it so, our visiting anglers and customers, the great guys that stay with us in our B&B and of course the charter skippers who support us so well. Till next month make sure you get out and wet a line where ever you are and Merry Christmas.