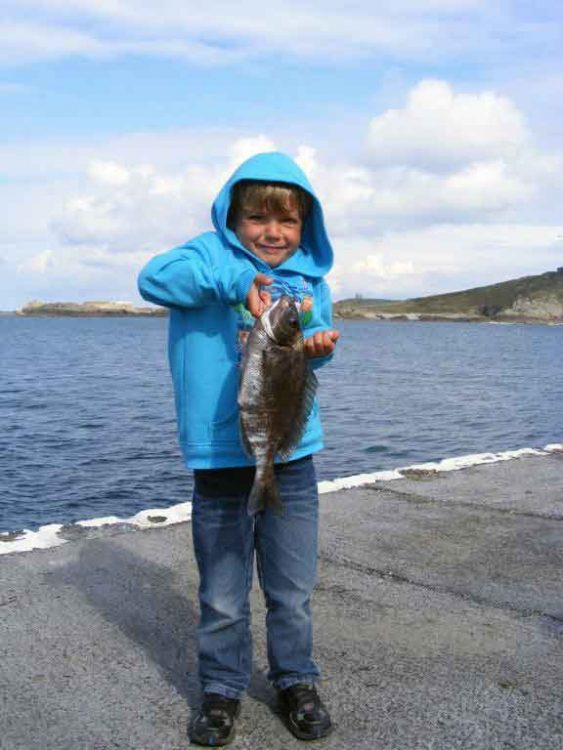 August is a cracking month for angling in Alderney, the only problem is that the island is crammed with the bucket and spade brigade, and with the locals joining in with the carnival frolics very little serious angling takes place. This is a shame because what is on offer is really excellent. Having said that though, as good as it is, it’s not as if the fishing in August is the be all and end all, it will be terrific from now till January so there is plenty of time to cast a line.

Just arriving for the shore angler to turn their sights towards are the terrific black bream with fish to 3lb caught on the float. First fish have shown on the end of the Breakwater on fish bait and this is a sure sign that there will be other areas around the shore to target these terrific fighting fish. They provide fantastic sport on mullet gear and anglers even catch them on bread, couldn’t be simpler. A choice of a 4lb bream or a 4lb mullet on this set up it is a no contest for me I’m afraid with the bream winning every time.

Bass are increasing in numbers all the time with lure fishing providing both quality and quantity this month. Best fish so far went 8lb and fell to John Copeland on a soft lure fished on the south side of the island. Much of what is being caught is in the 1lb to 3lb region but we are now regularly getting more reports of better fish. At this point I would stick my neck out and say that 2011 could be a better year than the last two autumn seasons when we have struggled to find the bigger fish compared to previous years. Other day time fishing has been revolving around the inevitable pollack which have been around in amazing numbers with fish to 7lb reported; again the Breakwater being the best venue. There are also plenty of gars and till recently plenty of mackerel, however these appear to be thinning out early but we have seen unbelievable numbers of fish around.

With the nights drawing in now, the attention of the local and visiting anglers alike is turning to the species feeding in the darkness. One local lad Nigel Bowditch fishes after sunset on a regular basis and he has landed several sole to 2lb in recent weeks. He is also a bit of a huss freak and has managed some cracking sessions with some trips producing a fish a cast and his best e night saw 14 huss landed. He did have a right moan however as he had been trying to target a decent conger eel. I was out last night after dusting the beach gear down which has not been used since May and only managed one pollack while seeking a ray. I had lots of bream bites and wish I had scaled down in hook sizes. Certainly there is going to be plenty to look forward to over the coming weeks and months.

The sport from the boats is simply terrific where bass have been the main feature of the month with fish to just shy of 9lb being landed. In the last week alone at least half a dozen shore and boat specimens between 8lb and 9lb have been reported from the island waters. Live launce is the main bait used but live mackerel always produces the best specimens even if the fishing is slower while trying to attract the biggest from the shoals.

Turbot and brill are still on the banks; it’s been a great year again for them with the catch and release methods applied by anglers having a positive effect. Most anglers are now fishing to a 45cm size limit allowing these fine fish to spawn and at this size they get at least two spawning seasons. The commercial size limit is just 30cm and as turbot don’t spawn till they are around 30cm to 40cm long you don’t need a degree in fish biology to work out where the problem lies with various fish stocks around the UK. Double figure turbot are being brought to the boat and brill to 9lb have been reported.

Tope fishing is a bit hit and miss but when it is on the fishing is phenomenal. Best tope reported was one caught by my nephew 12 year old Rhys Harding which must have weighed around 50lb. Black bream have been abundant around all the reefy outcrops, mainly caught in short periods over slack tide they again provide some terrific sport especially if you can get light tackle down to them. Plenty of fish over 4lb reported but none in that magical 5lb size yet. Other species that have been encountered are blonde ray, couches sea bream as well as red and tub gurnards. The wrecks have fished well this year but have now seen the best of it. However flurries of really good cod were caught just north of Hurd Deeps with some fish hitting 30lb.

Our annual shore festival is just around the corner; it is fished during the week October 22nd till 29th. Entry forms have now been sent out and if you require one please get in touch on my email mark@alderneyangling.com or call us on 01481 824884.

We’ve got a terrific Autumn period to look forward so hope some of you manage to make it out here. As always many thanks to those that do take the time to fish here, tourism is so important to the island and the income is much appreciated, we just hope you get plenty of stories to tell on your return.