It’s mid August and much like last year we are being battered by gales with winds of up to 48mph in recent days making fishing nigh on impossible, but overall we have had some reasonable weather allowing anglers to put to sea and enjoy the calm, balmy days we all enjoy.

At the beginning of the reporting period the fishing was as good as we know Alderney can be with tope, conger and huss featuring well, the tope in particular was nothing short of phenomenal. Reports from some boats were that ALL anglers were in to fish, not huge, but respectable enough in the 25lb to 40lb range. A lot of the fishing was on the drift with live mackerel so the hits were hard and the sport frenetic. Stories of spool outs and bigger fish or shark were common. 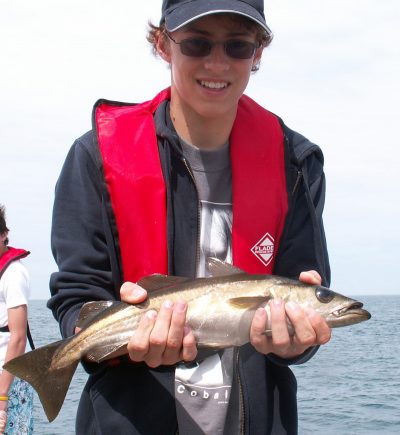 With the anchor down it was heave ho with the eels around the 40/45lb mark and again plenty of bull huss on the ground with the fish frequently into double figures. Other species such as cuckoo wrasse, black bream, pollack and of course the odd cod, pout or dog being hooked as well.

A few small tides that have coincided with some good weather has called for a little experimentation around the sandbanks. I was particularly interested in exploring the sharking and ray fishing potential. Good blonde ray can be found in many places, the commercial guys talk of fish in excess of 50lb,  but tides can make these areas difficult to fish, however I have found an area which is in the main fishable and after four short trips I had not blanked either. Conveniently there are other species to be had here too including turbot and brill and I will look forward to exploring the potential of this small area in future. I have also been told of some good shark activity, with a boat fishing close to us while out wrecking reporting that the sea was alive with garfish and sharks were picking off at the edge of the shoal.

Sandbanks still producing brill and a few turbot. The turbot have been a good size but not in the same numbers as the brill, brill showing in the 2lb to 5lb bracket with a small cluster of good fish around 9lb within the same few days. Bass have been increasing in numbers around the shallow rock marks but have not really formed the shoals we normally see in the deeper water. Still plenty to fish for though. Black bream are in good numbers, with fish to 4lb being reported. 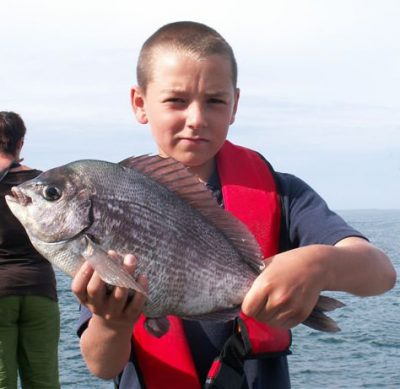 The fishing from the shore has followed the same pattern as from the boat. Two really good weeks at the beginning of the reporting period followed by disappointment caused by the weather. Mullet has featured well with fish being reported at over 5lb at various marks around the island and golden greys have been turning up around the harbour and has produced well as it often does at this time of year. Bass have been in good number, falling to plug and worm with fish being reported up to 11lb. The breakwater has seen some frenetic action during this month, in addition to the above couches sea bream, black bream to 3lb 5oz, red gurnard, red mullet, conger eel, pollack and wrasse to 5lb, gars and makerel have all be had.

Elsewhere around the island bull huss and sole have been caught frequently, with sole to 4lb. Previously sole had been seen to 3lb so this could be a good year for them. Although the boat fishing has been unpredictable this year it would appear that the shoreline is doing what it normally does with species appearing on time and in all the expected marks. It looks like we will be having a really good autumn.

For the latest reports visit http://www.alderneyangling.com