The weather is so much a feature of our fishing and till early July had been so kind to us. However it didn’t seem to improve the fishing too much as we would normally expect. So often we blame the fishing on the bad weather but that’s not been the case this season. As I write this we are seeing strong winds so hopefully that will stir some action up for shore and boat anglers. 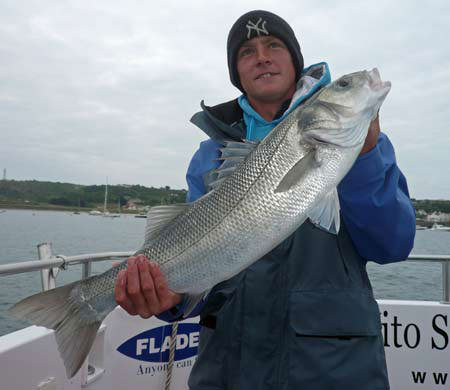 Bass have still yet to turn up in any sort of numbers but it would appear that there are plenty of fish in the kelp and rocks. The small boat anglers, kayakers and pluggers from the shore are enjoying good sport. Rapala lures, soft weighted shads and slugo grubs are all working from boats and kayaks with double figure fish reported each week. The harbour, as it does at this time of year, is seeing its fair share too, fish in the teens are showing but further offshore on the banks and in the Race, where the fish would normally shoal up, that they are scarce. Its not just here either, throughout the Channel Islands reports are the same similarly across the Channel throughout the NFSA’s Wessex D Section.

Turbot have thinned out somewhat during the course of the month and brill which normally follow are slow to appear. Our local boat Smuggler of Alderney has managed to find a few after a couple of barren trips but less time is spent chasing the flats now as other species increase in numbers.

On the rough ground plenty of light sport can be had with bream to 4lb and they come to the boat with some regularity. Boats that drift these marks, so that they can fish lighter, also pick up various gurnards on the sandy patches which is a nice eating bonus, also pollack and bass are taken on the drift. When anchored conger eels, tope and bull huss are encountered too which certainly adds to the excitement, although on 20lb snoods they don’t hang a round long! The wrecks have fished really well with pollack to 17lb, once again Smuggler getting local rods in to plenty of action and managing to test some of the Daiwa sponsored rods to their limit. Still a few cod around too with fish to 25lb.

On the shores and rocks of Alderney it has been somewhat disappointing. As I’ve said before though there is a lack of rod hours going into it for such a spectacular venue, if the fishing is slow the anglers that are there fish even less, only natural I guess.

Frustrating from my point of view as I would see it as a time to try different things but hey ho, if you can’t catch it on a float then it won’t be caught. Roll on when the UK anglers start to arrive. This point was brought home yesterday morning when I met a guy in the shop absolutely bursting with pride. That morning, as the sun rose, he managed to land a 9lb bass on a plug. The moral is: try something different get up early before work and fling a few plugs around or sit steady with a live bait; goby, small wrasse or pollack. There is a lack of fish close to shore but there are some cracking marks whereby you would catch ray (small eye, blondes and undulates), huss, conger and even possibly tope. A bonus turbot or brill is always a possibility around the headlands. Most of the seabed is covered in sand and we do catch the big flatties favourite food, mackerel and launce, from the shore so why not?

We have had plenty of mullet around, one or two to 6lb were caught but they’ve gone quiet now. There have been plenty of golden greys with fish to 2lb 6oz landed, they’re still around the harbour area mainly. Easier to catch than their grey cousins, the thick lipped mullet, golden greys can be caught just by using small worms baits, mackerel flesh or bread.

Lots of ballans here as usual and while pollack are thin on the ground around the Breakwater they are fairly plentiful elsewhere. Garfish have been very poor this year, I’ve been amazed at the lack of them this summer and will never again say ‘not another garfish’. In recent summers they have been an important species when teaching the kids to fish and of course they are a worthy quarry for novice anglers new to sea fishing. We are waiting to see the first of the sole, they should show this month. Red mullet have shown up and we await the return of the Couches sea bream which have been increasingly popular.

The Alderney Angling Festival is closing in on us. Entry forms should be posted this month so look out for yours and if you wish to come and have a go then just get in touch by emailing me on mark@alderneyangling.com or ringing 01481 824884. It is held this year from 17th October to 24th.  This is definitely a good time to come to learn about this fascinating island and pick the brains of a lot of knowledgeable anglers. Past results have been superb and would open your eyes somewhat to the potential the island has for specimen fish.

To those that do make the venture over we hope you have experienced some good fishing and trust you visit again, tourism is an integral part of island life and for your custom and commitment we do appreciate it. Lets hope the fishing improves as I have no doubt it will, it always does.