Mixed fishing experiences here in Alderney. It is a much improved scene with various species around the reef marks and bass now starting to show. Plus there are turbot and brill back on the banks. Happy days! This small report in no way reflects the fishing but how busy we are creating a lack of time, but they say in small packages come big things!

Never prolific at this time of year for the flatties but there are some about. Not easy fishing but boats which include Smuggler and Peace and Plenty are finding fish and able to get their anglers to double figures. In the main the turbot and brill are averaging around 4/5lb with the odd double figure fish. Very good to see those numbers of flats, just two days ago Smuggler managed ten fish. Bait is hit and miss on the banks despite the high numbers of mackerel elsewhere. The lack of bass has been a talking point for many anglers throughout the English Channel. In the Islands they have been trickling through and steadily increasing in numbers. Just as you think they have made it though we get hit the small tides and they disappear. Anglers aboard Tiger Lily have faired well with one lad hitting a double figure fish in among a catch of twenty. Bass have also shown well around the shallow marks in the tide runs and kelp areas where a charter boat can’t get in to. This does though provide great sport on light tackle for the small boat angler. 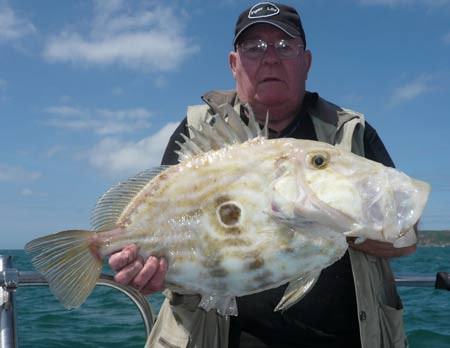 Despite all the quality table fish we get here it’s the fishing around the reef areas mixed in with the patches of sand that get me going. You never know what is going to turn up next. I have had the pleasure of crewing with Colin Dukes for most of the summer as we have been packing his boat out with novices and children …………. what a ball we are having, great to see happy smiling faces and they are so easy to teach. One three hour trip sticks firmly in my mind whereby we had ten species of fish which included a couple of conger, one of which was 44lb!! Screams of ‘its going to eat me’ echoing around the boat! Most trips we can give a good feed to the folks for their efforts and invariably Colin finds 5 to 8 species and all this on feathers or baited paternosters! Bream have been common place with fish to 5lb, bull huss well in to double figures. We have had several eels now and loads of gurnards which seem to be running big this year. Couches sea bream, triggers and cuckoos all turn up on the same trips and more. It’s been great.

On the wrecks the cod have thinned out but still plenty of pollack. Ling on the slack too and one or two wrecks have a stack of tope on them.

Shore sport has much improved with the three main species in abundance, pollack to 5lb, mackerel and garfish. Easily caught from most rock marks on float gear for most of the year they have been hard to find but how that has changed now. There are plenty of bass on plugs too with few blank sessions. No big fish reported though, nothing over 5lb. Thick lipped mullet re-appeared and seem to be building in numbers. On my guiding sessions we have managed on average three fish for every couple of hours. Wrassing has been good with fish to 6lb 10oz caught and lots of fish over 4lb. One or two anglers visiting this year have had some serious attempts at targeting them. Red gurnards, red mullet and the odd sole all starting to show. Autumn is looking good.

Our festival is getting forever closer and you can download an entry form here.