Tope Stuff For Tony Off The Lancashire Coast

The Lancashire fishing is picking up with the Gynn Wall, beach, boat and pier producing good fish. On crab and squid baits there are plenty of smoothhounds, mainly up to 5lb to date but over the next couple of months the bigger fish should make an appearance. Fish of up to 18lb were landed off the Wall last year so fingers crossed.

There are plenty of other species kicking around on the night tides,. Rays, dog fish, whiting and dabs have all put in an appearance. The daylight tides are still producing but in fewer numbers. There have been a few sole around at short distance fishing with ragworm on very small hooks.

The tope are showing already on the boat and pier. Jordan has personally seen two over 30lb last week. Big fish baits for the chance to catch jaws!

Tony Humphries enjoyed his session out on the boat where his catch included a 30lb tope. 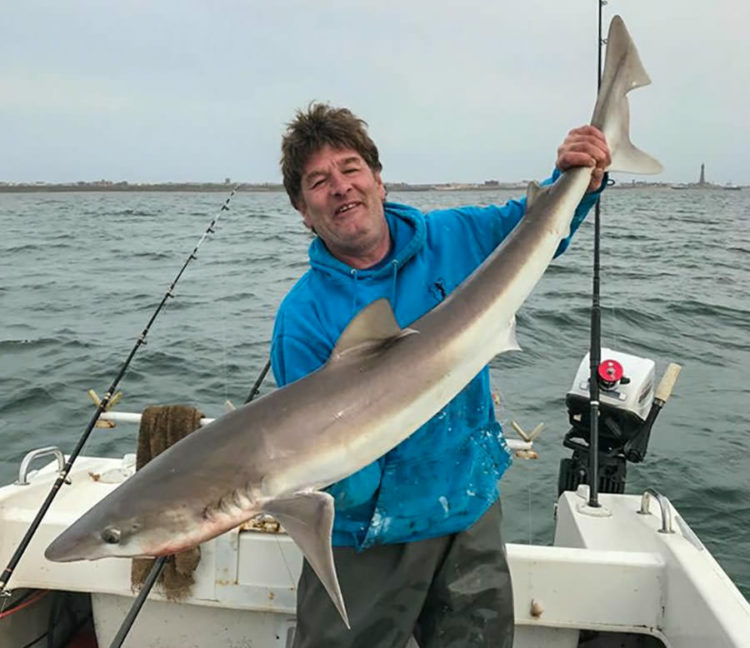 Tony Humphries with his 30lb tope

The fishing was very patchy with some anglers only managing to catch a single fish in size while others put together decent bags of fish. Many of the anglers landed plenty of undersized flounders. Also caught were an odd small bass and eels, the best eel was caught by Ian Hewitt (LMS A) which measured 67cm.

The team match was won by LMS A with 12 fish scoring 214 points. In second was H&A C whose 11 fish scored 168 points and third place went to LMS B with seven fish for 125 points.

Fleetwood and District Angling Club fished their latest match at Clevelys over low water. Conditions were good with a light north west wind, although the bright conditions did not help the fishing. The members had been expecting bass, dogs and smoothhound in good numbers, unfortunately it did not happen and only five of the fourteen competitors caught fish.

A last cast double for Dave Shorthouse gave him the win over Peter Lambert.

Next week’s match will be on the Gynn Wall with hopefully more fish.

Leyland and District Sea Angling Club had an evening match on the Gynn Wall last.

Karl had the biggest fish, a 66cm starry smoothhound. In all nine different species were caught by the 13 who fished and there were no blanks. All fish returned to fight another day. Big Al won the raffle.

How to Tie a Sliding Float Rig For Bream