Fleetwood and District Angling Club fished their latest match last Sunday when 27 keen anglers lined up on the beach between Manor Road and Dronsfield Road towards the kite club. It was a big thirty one foot tide and an offshore breeze which produced a calm sea.

Luckily there was not a lot of weed, but the anglers experienced a strong tide pull on the ebb. As expected the fishing was bad with only three fish caught.

Congratulations to the three lucky or is it skilful anglers who managed to catch.

Barry Critchly fishing at Dronsfield Road had a 29cm flounder, worth 10 points, on crab to win the match. This was also the largest fish winning him a total of £81. 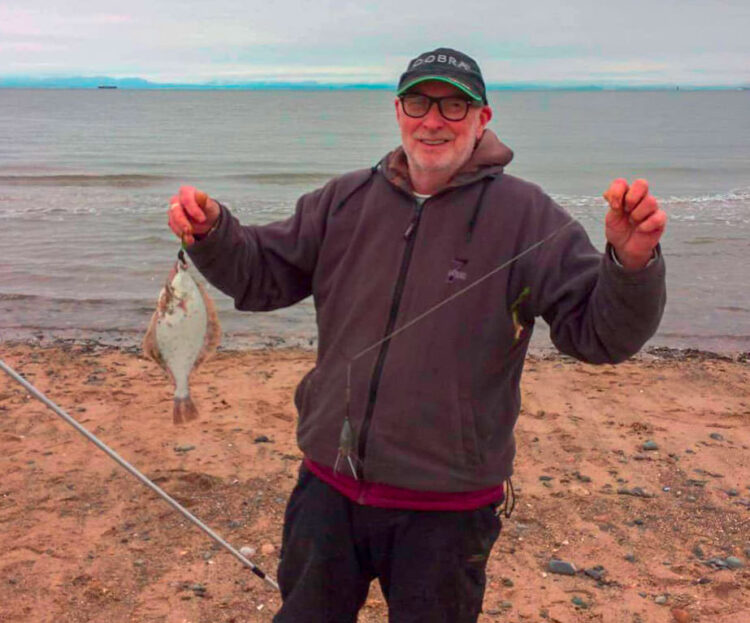 Barry Critchly with his winning flounder

In second place was Dave Hutchinson with a 29 cm, eight point whiting also near to Dronsfield Road. This won Dave £32 and third place went to Dave Hoyle fishing up towards the kite club with a 19cm flounder worth three points winning him £23.

The other 24 of us went home completely dejected.

Thanks to Ray Rodger for being in the right spot to get a photo of Barry.

Next week’s match is from Beach Road to Point, and most of the match will be in the dark so hopefully there may be some fish.

Mike has got the tide tables for next year which will be given out on a first come basis at the next match and subsequent matches.

Dave Brown tried low tonight picking a spot well away from any rough ground and was surprised to find a nice surf running. However that didn’t stop the dogfish and he was into one each cast until the flood started and he picked up some whiting before he had nice slack line and after thinking he’d missed the fish Dave was happy to see a bass flapping in the surf. A tad over 2½lb the fish provided a tasty tea. 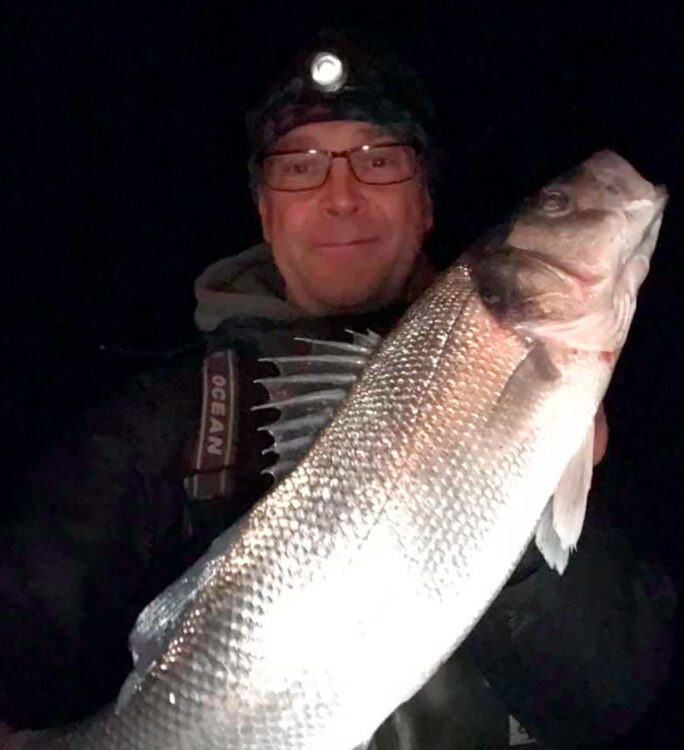 Dave Brown with his bass

Matt Baker enjoyed a productive day on the high and low. He has two whiting worth taking home and a pile more tiddlers and dog fish. In total he had five species over the day including a flattie and a rockling.

Pennel with squid and fresh black fished out far got a doggy and a whiting. The remainder came to a little £10 mackerel hunter rod fished close in at about 20-30 yards, if that, with a three hook flapper baited with fresh black. All in all a good day out.