Conditions looked ideal for good catches, but unfortunately the fish hadn’t read the script and the match was quite a struggle throughout, with some catching just a single fish and three blanks. But top class Grimsby match angler Garry Hutson is unstoppable at the moment, winning his fifth SPAC match of the year, with five fish measuring 150cm in total. Garry actually caught six fish, but a mix up over the rules resulting in him returning a silver eel to the sea unmeasured. 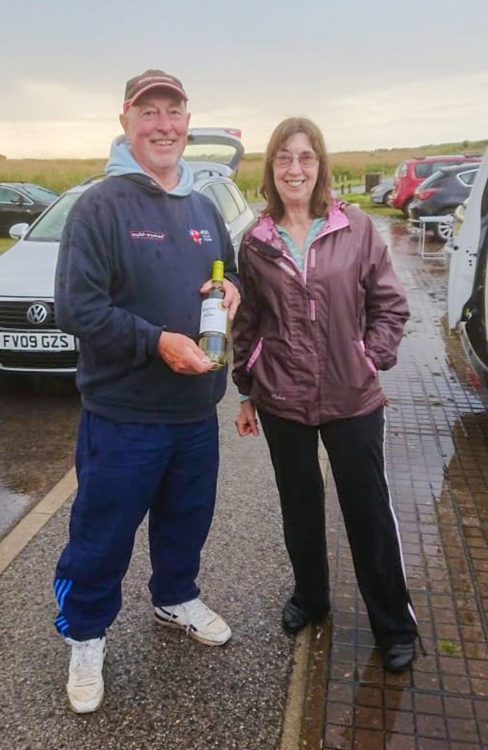 Just one fish behind Garry in second place came local angler Rick Jarvis, who fished consistently well to end up with a five fish mixed bag for 124cm. Grimsby ace Dan Jackson had just three fish, but one of them was a 63cm lesser spotted dogfish, which put him up into third place with a 112cm total. Fourth place was also paid out due to the good turnout, with rising star Josh Collier taking the coin with four flatties measuring 110cm.

Brian McKenzie only caught two fish, but both of them were 30cm plus flounders, with the larger of the pair hitting the measure at 34cm and winning the longest flatfish prize. Ex-England youth international Tom Marshall was in amongst the prizes again, winning longest round fish with a 64cm dogfish.

So in terms of fish caught, the match turned into the worst so far this year, with just 42 fish caught, consisting of 19 dabs, seven flounders, three dogs, two bass, three silver eels and eight whiting, the vast majority of which were returned to the sea alive.

A big thank you goes to Georgina Parker, who came along to present the prizes and a bottle of wine to the winner, in memory of her late husband. She also kindly brought food, which was gratefully received by all, despite the heavy downpour after the match!!

The next SPAC match will be held on Sunday 30th June from 3 till 7pm at Moggs Eye, with Club members fishing for the Sheffield Cup. The match is open to all, so why not come along to fish with our friendly little Club and hopefully sample some of the excellent fishing that Lincolnshire beaches have to offer.

SPAC member Paul Marshall caught and released a couple of 7lb plus smoothounds from the beach in front of his caravan just north of Butlins yesterday evening, so here’s hoping that the bigger hounds are here at last and will turn up in the next few matches.

Just a quick reminder that there is no minimum size limit in SPAC matches and that every fish must be measured on a metric fish measure, including silver eels. Also, every angler must be in possession of a large bucket or similar container, to retain fish in before registering and returning. Please pass on to those not on Facebook and please contact SPAC Secretary Chas Tibble on 07984 967988 or chastibble@hotmail.com for further details.