Dogs Are Off and Running at Gynn

We are starting to get a mixed bag of fish on the Gynn Wall with dogfish being abundant with some plaice, small bass, whiting and pup hounds. Best bait at the moment seems to be rag worm which is catching the majority of the species. The last couple of days we have also seen the appearance of the odd small codling which means the main run should not be not far away.

The most productive areas on the Wall are from Red Bank Road to Gynn square. Five Bar Gate at Rossall is also fishing well. The night tides are producing a lot more fish but the day tides are still producing dogfish. Great fun on light tackle though and a good chance everyone will catch.

It is now coming to that time again when our matches start also with the first one being the 19th November. For more details please contact Bispham Angling.

Last Sunday Martin Foxtrot Fished high tide on the river Mersey where it was a bit quiet at first but soon picked up towards the top of the tide. He managed a thorny and a couple of whiting. Six rays including Martin’s were landed and quite a few whiting.

Jordan Fished with Craig Orrit just down from the shop for two hours of the flood. First chuck into the surf and Jordan was straight into small bass on rag worm. As the tide flooded the dogs turned up in numbers. It didn’t matter what bait you put on dog, dog and more dogs. Craig managed to bag seven starry smoothhound pups and some whiting. Bait of the night was definitely rag worm and frozen black but it didn’t matter. A pulley pennel 2/0 rig fished at distance took all Jordan’s fish except the bass which where close in on the breakers of the first bank. 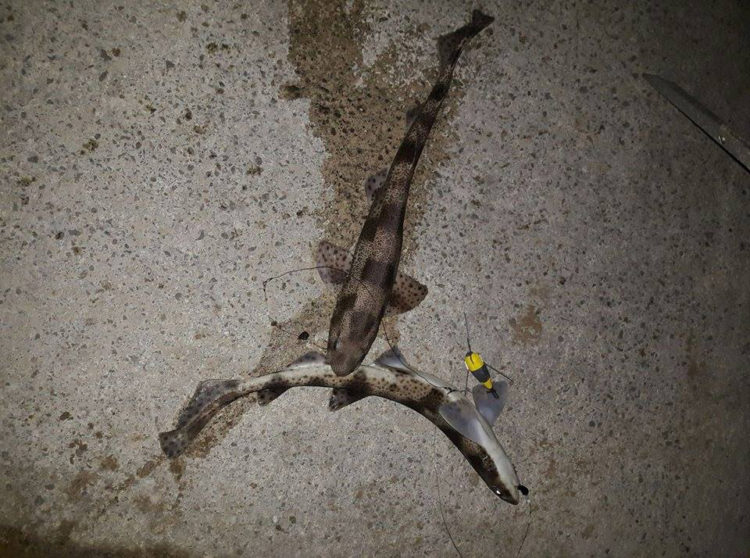 Rick Pennington among the Gynn doggies

Great fun seeing every bite on the Grauvell light rods and feeling the whole fight with the fish.

Dave Brown had a few casts on the ebb at Fleetwood and had another couple of plaice, and a dogfish free day.

Reece Medcalf fished at Five Bar Gate with his Uncle. They enjoyed a great evening with dogfish and whiting.

Fleetwood and District Angling Club fished a Club match at Cleveleys on Saturday evening. After a week of winds and reports of the fishing not being to good, it was a pleasure to find the fish had decided to come out to play. The anglers found lots of dogs, a few whiting, one codling, a couple of small smoothhounds and four thornbacks. Worm wrapped with squid and sandeel seemed to be the killer bait.