Mackerel and other fish baits

Planet Sea Fishing’s resident bait expert, Steve Walker makes the case for mackerel, agruably the most readily available and most effective sea fishing bait for all manner of species around the UK.

Mackerel is arguably the most versatile and effective of all the recognised sea fishing baits. There are few fish that will not readily accept a mackerel if it is presented in a form to their liking. Used in small strips, chunks, fillets, or whole, it makes a deadly bait for all manner of species, including a few that might come as a surprise. Mackerel routinely accounts for lesser spotted dogfish, bull huss, ling, conger, tope, rays, porbeagles and blue sharks, and other predatory fish such as bass and pollack. Bread and butter fare like whiting, dabs and mackerel eagerly attack strip mackerel baits. Less obviously perhaps, cod, particularly from the shore, are in fact regularly caught on mackerel. Anglers have become so brainwashed into thinking that worms, crab, squid and other baits are the only thing that cod will touch. Often maligned in favour or more elitist or fashionable baits, mackerel should never be dismissed. 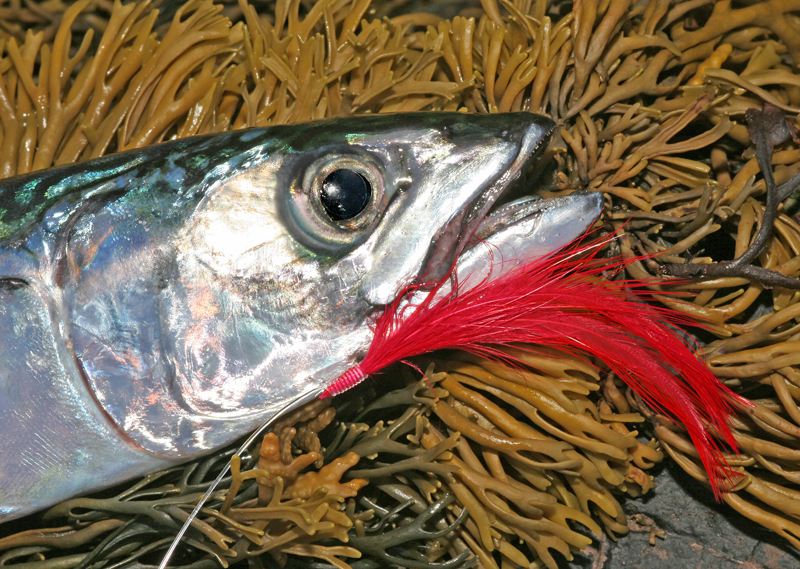 In the 19th century mackerel was the only bait to use for cod longlining, and supplies would be salted in barrels for winter use. More than once, I have seen fresh mackerel outfish other baits for cod in the winter months from my local piers. This is not worm baits tipped with mackerel, but a big fresh chunk of mackerel flesh which has an almost magical tendency to produce bigger specimens. Perhaps the reason that it doesn’t produce many more cod is that few anglers use it.

Although it is always better to use a fresh bait, frozen mackerel and supermarket bought produce will produce plenty of fish, particularly dabs and whiting. But most species have a distinct preference for a fresh bait. I freeze a quantity of mackerel strips taken from the tough belly to tip off worm baits when fishing for winter whiting and dabs. Tipping a worm bait with a small sliver of mackerel will not only keep the worm bait secure, it will also offer a scent trail and provide a little bit of attractive bait movement. Float fishing, free lining or slow retrieving with 5 – 6 inch long strips takes coalfish, pollack, mackerel, bass among other species. These methods are effective all around the UK coastline and work particularly well from the generally rocky shore of S.W. Scotland where I regularly fish in summer. 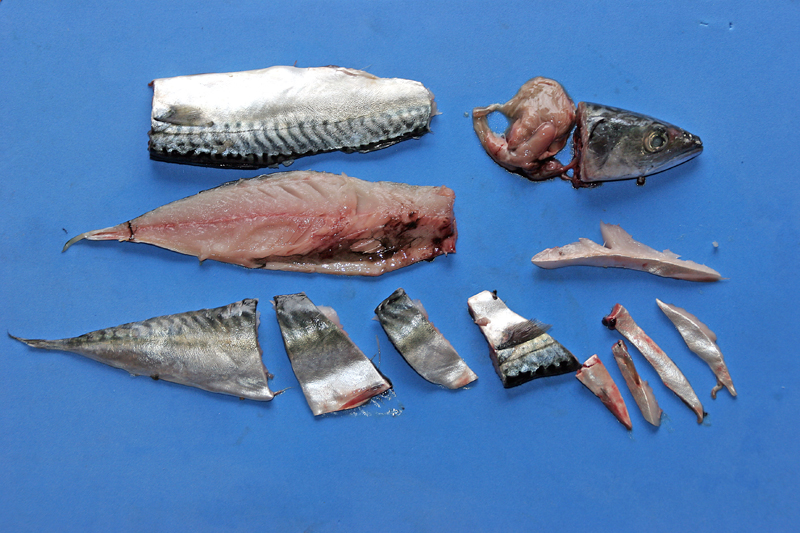 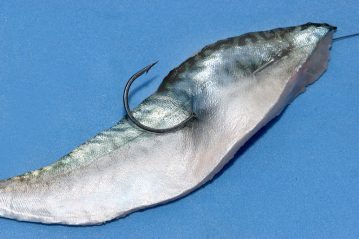 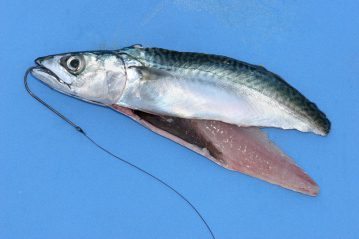 A bigger bait generally performs better for typically conger, cod, bass when bottom fishing. And also freeze down a few fillets expressly for use in the winter when the bigger cod move inshore between January and March. Bigger baits for bigger fish will always be true, even if some big specimens are caught on small baits intended for other species.

Mackerel is an oily fish requiring to be frozen very quickly in order to ensure a high quality fresh frozen bait. Unless you actually need whole mackerel for the likes of common skate fishing from the boat, it is better to freeze whole or part fillets as these will freeze a lot quicker than a whole fish. Preparing your freshly caught mackerel for the freezer is straightforward: fillet the fish, and give it a quick rinse in fresh water then dry on a paper towel or similar. Next place the fillets, part fillets, or strips on a metal tray in the freezer. When the fish is fully frozen lightly, but firmly wrap in cling film, taking care to squeeze all of the air bubbles out. Place in freezer bags, making sure all of the air is sucked out of the bag with a straw before sealing it. If these simple steps are followed the quality of the bait will be far superior to just throwing a couple of bits of fish into a bag and leaving it to freeze. Removing the air helps to prevent freezer burn.

A vacuum packer is well worth the investment to ensure top quality frozen baits. 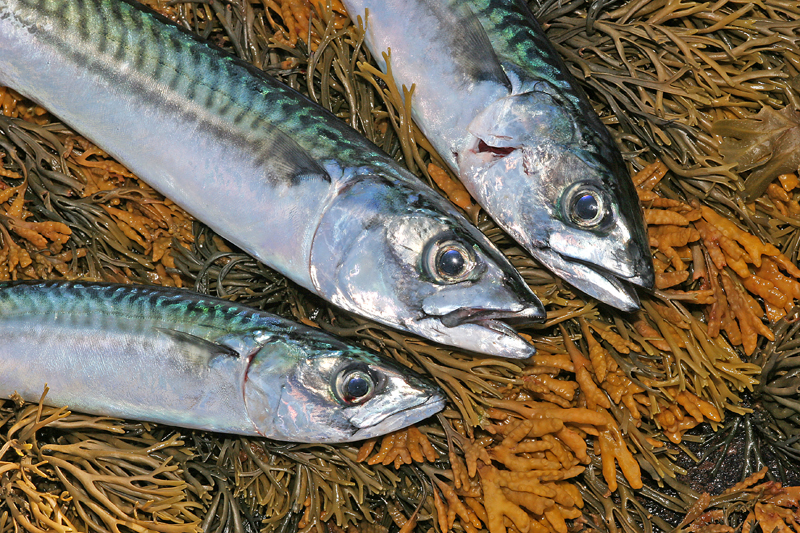 The actual size of mackerel caught by the angler can vary considerably for year to year and venue to venue. In the North East of England they are generally quite big, averaging around 1¼lb to 2lb. Used whole they would be too big for shore species to be probably over-sized for most boat species other than shark, tope, and the bigger ling or cod. Presentation options with bigger fish in mind include removing the backbone and fishing them as flappers, or whole fillets. Elsewhere, the average size of mackerel can be much smaller. In S.W. Scotland some weigh just a few ounces, and a whole one of these ‘Joey’ mackerel would be ideal for a various shore species including bass, rays, conger, shore tope. Joeys also score well afloat.

Of all the oily bait fish such as herring, pilchards, sardine, bluey/saury etc, the mackerel is the toughest and the most reliable across the board. The other examples can also be very effective as bait, and sometimes will produce better results than mackerel. Herring would probably be the second choice as this is also usually quite readily available from supermarkets and fishmongers. Herring are regularly caught in large numbers off some North East piers every year by anglers fishing for mackerel. I believe herring possesses more scent than mackerel, but the flesh is much softer than mackerel, and unless you are using whole specimens for big fish like conger or ling, it will has to be tied onto the hook with elastic thread. One advantage of herring is that although it tends to break down quicker in the water it produces a trail of fine fish particles as well as an oily scent trail, and I find that it outfishes mackerel when fishing for whiting almost every time. I also prefer herring to mackerel when making groundbait, and often purposely buy a few herring for this purpose. 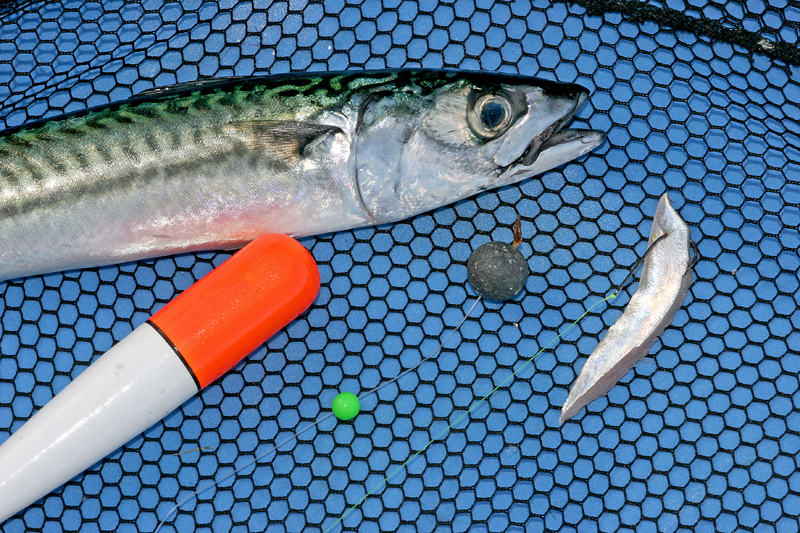 Mashed up sardines are also excellent for groundbaiting, and the bigger specimens, pilchards, can be bought frozen in bags of around a dozen from supermarkets. These will be around 20cm to 30cm long and will also make a good whole or sectionbait for ling, conger eel, tope etc. Like herring, these are soft, and when cut into smaller pieces they need to be tied onto the hook. However, most anglers will choose mackerel first and only buy other fish baits as a second choice. If you are going to use any of these altermative oily fishes aside from whole for obig fish, they require need to filleted with a sharp knife. It is always better to pre-cut a preferred cutlet, srip or slice of bait from a fillet, rather than hack away at a whole fish body. Done thus the resulting baits are neater, easier to trim, and there is little waste. A couple of long strips can be cut from the belly flesh and then trimmed to a suitable size to use for floatfishing, freelining or short range ledgering. Alternatively, they can be cut into smaller pieces and used to tip off other baits. Then, one or two bigger pieces, or several smaller diagonal cut pieces, or ‘lasks’ can be cut from the remaining fillet and to give baits for bigger species. 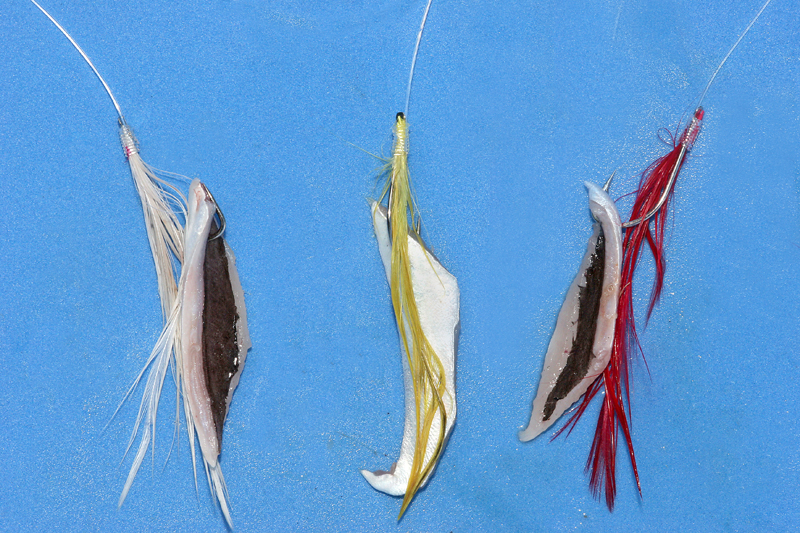 When I use mackerel there is usually no waste at all, especially when fishing in Scotland. The head, guts, and tail go into the water for groundbait for bigger species – hopefully conger eel – and any remaining flesh on the filleted backbone gets scraped off and goes into the groundbait for mullet. I then have two fillets which are either used described as above, or cut up into very small pieces and these are also added to any groundbait. This groundbait attracts everything, not just mullet: garfish, mackerel, pollack, coalfish, wrasse and lots of mini species are all drawn to it. The effectiveness of using a fish and bread based groundbait when fishing so many rock marks cannot be over emphasised.