Rating a reel as the best in its class may be a difficult claim to substantiate but with a strip down review Des Westmore establishes that his customer’s claim may not be far wide of the mark with the Daiwa Sealine X 30SHV.

The angler who gave me this month’s reel to repair told me that it was “The best up-tiding reel you can buy” so I thought it would make an interesting repair and review at the same time. The reel is the Daiwa Sealine X 30SHV which is a relative newcomer to the original and still popular Sealine “Slosh” reel family. Having stripped a few Sloshes apart but never one of the new series I was interested to see what Daiwa had done with the newer models. 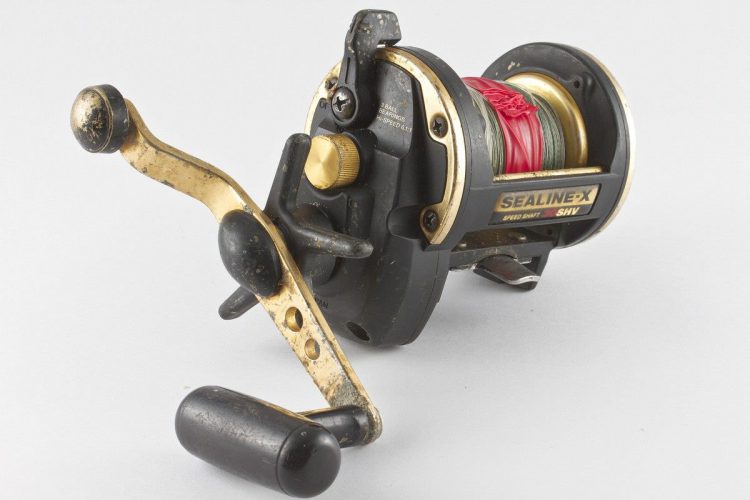 As it turns out, Daiwa haven’t changed a massive amount but what they have changed is pretty important. The carbon plastic frame is much the same but the new reel now has a gold aluminium alloy spool though the two-pronged centrifugal brake is unaltered. Anti-reverse is still taken care of by a ratchet and pawl system which while not silent, is rugged and dependable. The Sealine X 30SHV also shares the 6.1:1 gear ratio of the original Slosh. This makes for a pretty massive gear set so strength and longevity should be ensured.

As with the original, the big main gear facilitates the use of big drag washers. It is a shame the fibre ones are made from poor materials but that is not a problem and can easily be fixed. What is new is how well the drag has been waterproofed in the Sealine X. Daiwa have really paid some attention in this area and fitted not only an O-ring on the handle shaft to prevent water tracking into the drag, but they have also fitted a rubber seal which fits onto the main gear. Combine this arrangement with a greased carbon drag, which will be added as part of this reel’s service and you may well potentially have one of the most reliable drags around. 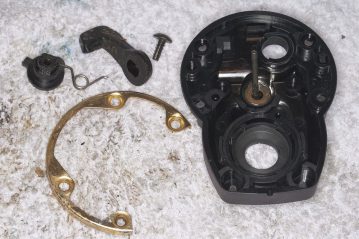 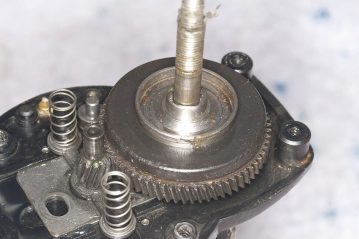 Another major difference from the original Slosh is that the newer model features Daiwa’s “Speed shaft”. This means that the spool shaft does not extend through, and thus provide the mounting for, the pinion gear. The pinion gear sits instead on a separate shaft all of its own which results in two things. Firstly the pinion can be far more accurately located as the pinion gear can be made to fit the shaft more precisely. Secondly, the spool shaft only supports the spool and as it is totally disengaged from the gear train when in free spool, there is no drag at all from the pinion which means the reel casts far more smoothly as well as potentially further.

The final variance is the new handle – bigger is better in this case and the new item is far superior to the original. I would guess the new handle fits the old Slosh so this may be a good upgrade to consider if you own one.

So then, 6.1:1 gears, big drag, big handle, centrifugal brakes and a free-floating spool – no wonder the owner rated this reel so highly for up-tiding but what had it done wrong to end up on my work bench? The answer to that is that it had done nothing; it simply wasn’t feeling the love and had finally succumbed to a war of attrition with the elements. The owner said the reel was “slipping” and he felt it was more likely that the gears rather than the drag that were causing the problem. I couldn’t think of anything straight away that it might be but as it turned out, the cause was quite easy to find. 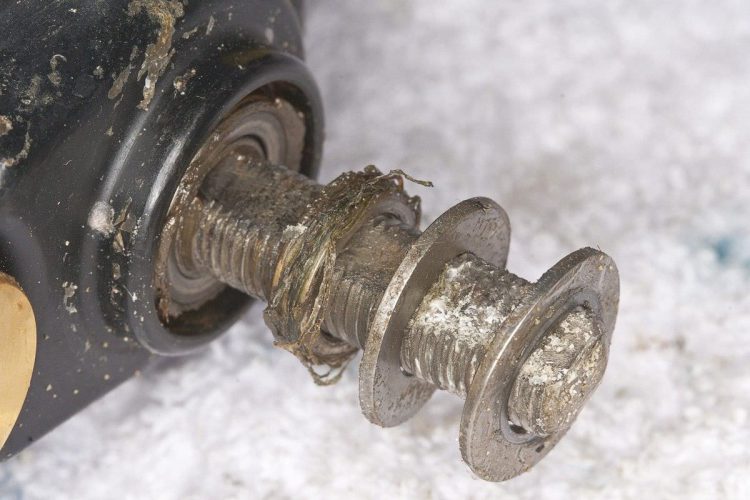 I noticed that there was a massive amount of radial movement between the handle shaft and the right hand side plate. Stripping the reel down I found a length of braid embedded in the threads below the star drag wheel. This kind of set the tone as once the star was removed I could see the sorry-looking bearing beneath it which was a nice shade of orange. Not only was it corroded, but it was also completely seized. This must have happened a long time ago and set underway the chain of events which led the reel to my workbench. 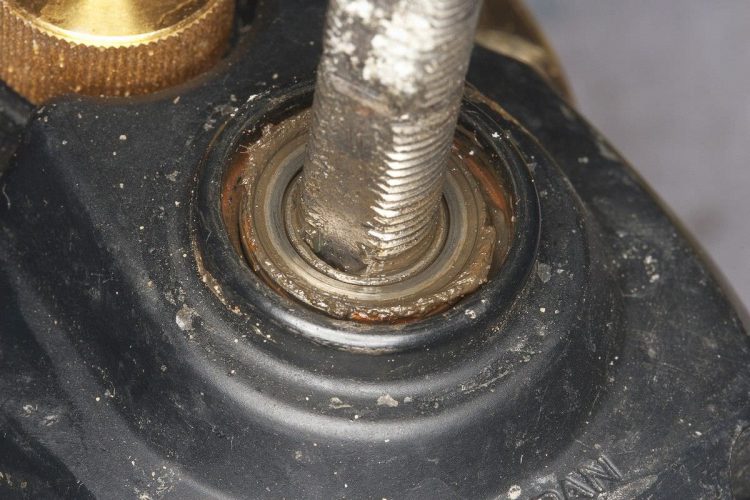 The handle shaft bearing was corroded, seized and had worn away the sideplate

The bearing’s inside diameter is located on the handle shaft and outside diameter is located within the right hand sideplate. Unfortunately, as the reel had continued to be pressed into service after the bearing had seized, the bearing had subsequently worn away the plastic side plate. This allowed the handle to move around far too much when the handle was turned. This in turn ground away the bushed spigot on the end of the handle shaft, which then allowed the handle even more freedom to move. This then set up a vicious cycle of wear which ultimately led to the handle being able to move so much radially, that the teeth of the gears would no longer mesh. The end result from all of this was the “slipping” that the owner described. 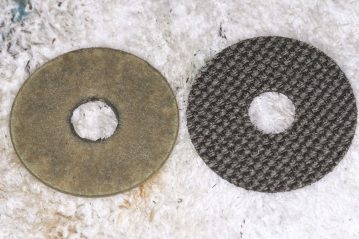 Out with the old, in with the new; Carbontex drag washers 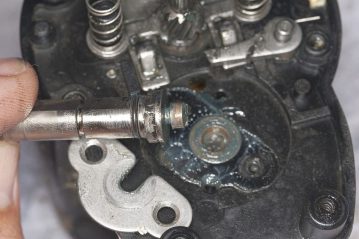 Luckily it was the handle shaft spigot that had worn, not the bush that is integral with the frame

Fortunately the diagnosis was straightforward, with a simple fix; unfortunately the solution was not cheap as it involved a new side plate, a new bearing and a new handle shaft. The fact that it was the spigot on the handle shaft that that had worn and not the bush that locates it saved this reel. Had the bush worn, as it is integral with the reel frame the cost of that item would have made it beyond economic repair.

Looking round the rest of the reel, it had survived very well. The spool bearings were still smooth and did not require replacing. As the reel is mainly plastic, corrosion wasn’t an issue though it must be said that the handle had seen better days. Summing up, this looked to be a pretty tough reel. The bearing that failed and caused all the problems is a common weak point on many reels and it was just a shame that the reel had continued to be used after the failure. With some of care during reassembly I have hopefully stopped that reoccurring and also made this reel even more reliable. 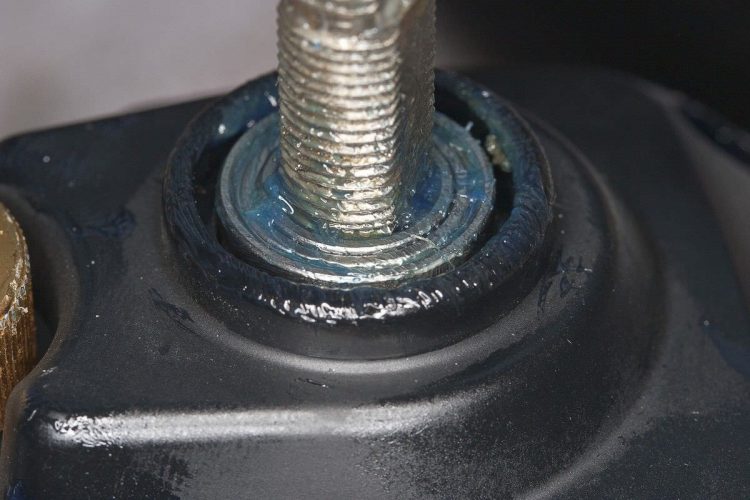 To stop the handle bearing failing prematurely, I popped the shields out of the new bearing and pumped it full of waterproof grease. The bearings shields were held in by clips so I was able to replace them afterwards. To further seal the reel up I removed the free spool lever and pumped waterproof grease around the handle lever’s shaft where it passes through the sideplate. Hopefully this means no salt water will be getting in that way. Inside the Sealine X there are very few components but I made sure they were all given a coating of grease. It is important to remove the stainless steel “Yolk plate” that moves the pinion gear into the free spool position. This slides against the plastic sideplate so a coating of grease beneath it is important. Finally, as is nearly always the case with reels I look at, greased Carbontex drag washers replaced the originals. A coating of drag grease was also applied to the inside of the rubber cover. At the left hand end of the reel there is very little to do; a quick clean of the brake drum and some strategic greasing of the line out ratchet were all that was required. 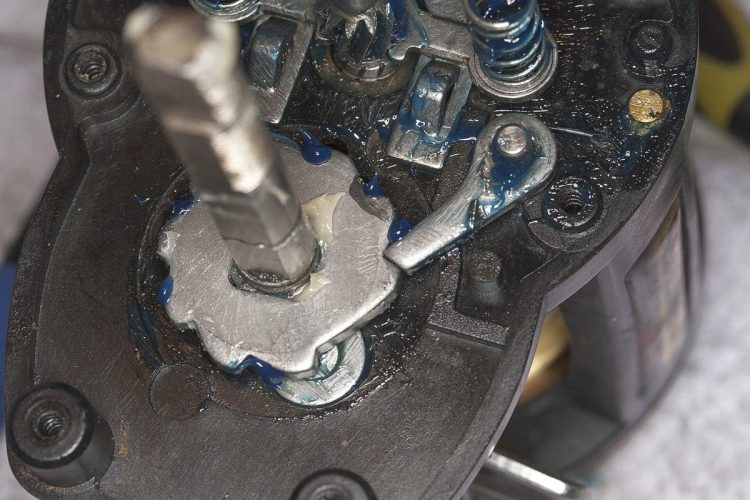 This is a very good reel with little to criticise. I can certainly see why the owner likes it so much for uptiding though it would also make a great reel for lure fishing for bass and pollack. It’s a fairly big reel having a capacity of around 300yards of 20lb mono and for braid, I would think the smaller “20” sized reel may be a better option. Daiwa’s web site shows latest reel is now called the Sealine X 30SHA but reading the spec’, I can’t see much in the way of any differences. Take a look at www.daiwasports.co.uk for more information.