Iridium is a comparatively fresh name on the UK market from Tronixpro but the range has rapidly gained a reputation for quality fishing hardware at reasonable prices. Here David Proudfoot discusses the Stingray fixed-spool reel which he has regularly battered from beach, boat and a few other places besides.

Over the past nine months I have thrown baits from beach, pier and rock-edge marks with this stylish reel attached to the Iridium Firesurf 420 beach rod, and also pressed it into service for light uptiding from the boat. The smart white/grey painted bodywork is constructed of corrosion-resistant graphite, which to date has withstood my less than gentle treatment with no evidence of damage other than a couple of small chips near the bail arm. The deliberately lightweight construction keeps the weight down to 585gms (just over 20 ounces) and reduces arm strain if the rod is being held for long periods. 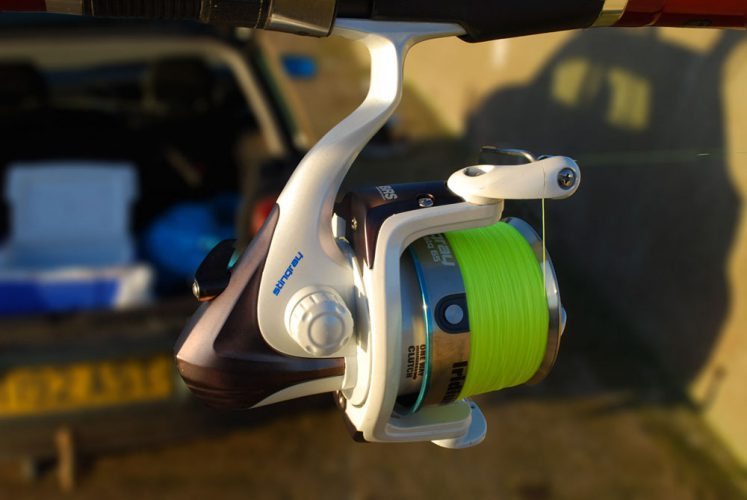 The soft-feel hand-grip on the handle is comfortable, and the complete handle is easily reversible for left or right hand use. Working balance is excellent, and, on retrieving, there is little evidence of the side-to-side wobble common in many similarly sized and priced reels. The retrieve is smooth enough to be a joy to use when slowly bumping terminal tackle over the seabed to impart bait movement when targeting flatfish or coalies. 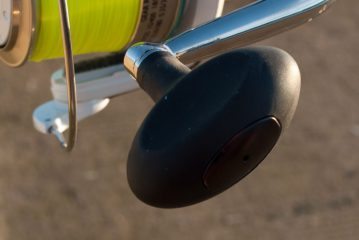 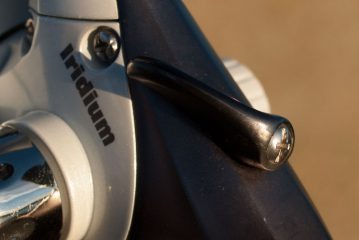 Unlike a number of shore casting fixed spool reels the Stingray retains an anti-reverse switch at the rear of the reel which I particularly like for reasons of uncomplicated, unflustered convenience. This permits back-winding and simplifies matters when threading line through the rod guides, or moving the rods and rod-rest up the beach ahead of the approaching tide. When bouncing a bait downtide from a boat, freeing up the anti-reverse affords far more control than opening the bail arm. In the case of this reel, the weight of a 3oz lead is sufficient to allow the reel to back-wind under its own steam.

Most modern reels claim to have an “Infinite anti-reverse”, which, strangely enough. has nothing to do with the true anti-reverse mentioned above. Standard anti-reverse mechanisms employ a one-way cam gear on the main spindle and a lever that is activated by a coiled spring when the handle is turned. After the handle is moved a short distance, the spring activates the lever, which engages into the cam, and the spindle cannot then turn backwards. However as the cam generally has only 6 to 8 “notches” on it there is a backwards movement until the lever engages. A true infinite anti-reverse reel, of which the Iridium Stingray certainly is one, instead employs a one-way bearing around the spindle, which allows it to lock instantly with no irritating back movement of the spindle or spool. Few reels costing less than £75 can demonstrate this. 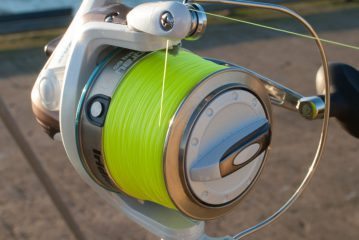 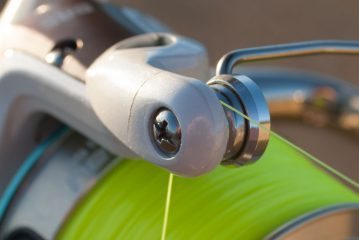 The drag on the reel has sealed felt washers and despite the occasional accidental submerging in the sea the system still operates smoothly. I am not an overly attentive maintainer of my fishing reels and I have lavished no more attention on the Stingray other than a quick run under the tap after a trip. The drag wheel has a clearly audible click when turned, making it easy to micro-adjust drag settings. In the fully locked position, the spool is rock-solid for those who need to power into distance casts.

The bail arm is of solid construction and I have experienced no problems with the bale closing during a cast. The arm will close automatically when the handle is turned but I do prefer to close the bale arm by hand, as I find it helps prevent line twist. The roller turns freely and there is no evidence of wear-and-tear as yet. I have only spooled the reel with nylon monofilament so far and therefore cannot comment on how braid would affect it over a longer period of time.

A sound little feature is that the rotor has a brush on either side, which helps prevent loose loops of line from being trapped under the spool and around the spindle. I can recall only once when I have had to remove the spool to unwrap coils from the underside and that was mostly due to my own lack of attention. The reel has a geared retrieve rate of 4.8:1 that, when the spool is full, means that 110cm of line is returned with each rotation of the handle. The combination of the balanced bail arm and the smooth oscillating spool combine to give a line lay which matches reels at twice the price of the Stingray. 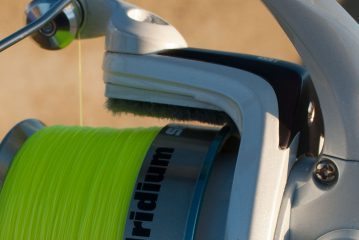 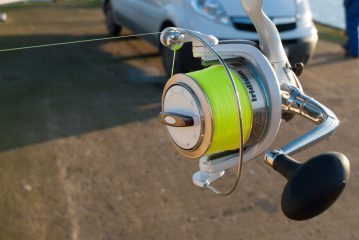 The main spool supplied is manufactured from aluminium with a capacity of 0.25mm/260m-0.28mm/210m-0.30mm/150m, and the spare graphite supplied is more than twice as deep with a capacity of 0.30mm/380m-0.35mm/320m-0.40mm/290m. It is good to see capacity being specified in line diameter rather than breaking strain that is largely irrelevant in these days of braided lines; some of the big reel producers and distributors should take note.

Given the very competitive recommended retail price-tag of just £74.99 there is little that I can think that I would change with this reel, other than perhaps the spare spool replicating the main one. I would say that in common with a lot of tackle available these days these reels will probably be available for a limited time only before they are replaced with another similar model. The Stingray is a lot of reel for your buck and my advice would be to grab one while you can before it is superseded by something else that might not be just as good.

A couple of sources for the reel online are Gerry’s Fishing and Glasgow Angling Centre.